Build a cooperative barrier between the US and Mexico. 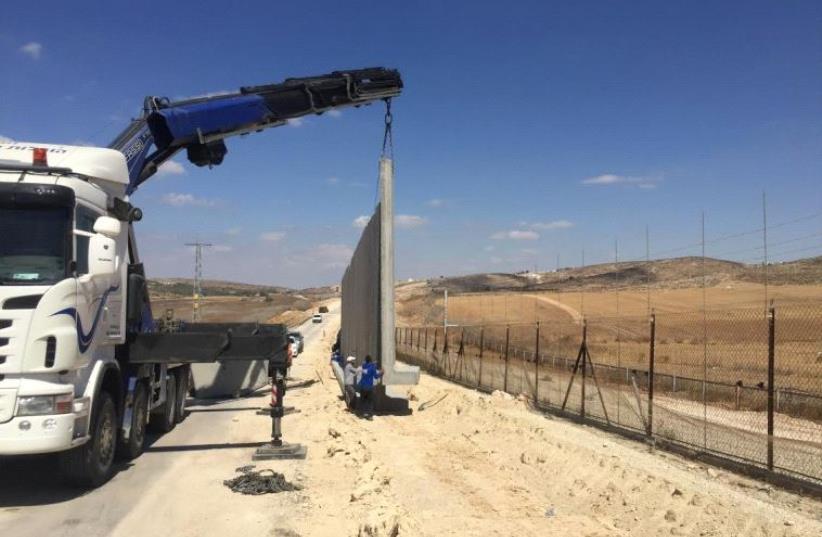 44km of new concrete wall are being built along the Green Line west of Hebron to prevent terror infiltration in an area known as a porous section of border
(photo credit: SETH J. FRANTZMAN)
Advertisement
When US President Donald Trump refers to the wall he wants built on the US-Mexico border, he often speaks of the security barrier between Israel and its neighbors. Indeed, the wall between Egypt and Israel has helped stop the infiltration of migrants from Sudan, Eritrea and elsewhere who are looking for a better place to live. However, Israel has developed the “Industrial Zone,” or IZ wall, between Palestinian areas and the rest of Israel, a structure that features double entry.The IZ wall on the border features two separate entryways. From the eastern side, Palestinians arriving from West Bank cities enter in order to find work. On the western side, Israeli entrepreneurs enter in order to find workers. One example of the IZ wall can be seen at Nitzanei Oz. That wall is leading to cooperation between Israel and its neighbors.Everybody gains: The Palestinians enter the building, work, earn decent wages, and return to their homes. The Israelis who own the machines, export the goods produced beyond the IZ wall. Everyone exits the same way they entered, and there are security checks. Inside the wall zone, virtually everybody cooperates in the hopes of making the system profitable.When there is a huge difference in economic development between two neighbors, as it is the case between Israel and the PA, this IZ wall provides work to those from the less developed area, without the problems of migration. The Palestinians also benefit from the spillover effects of learning by doing. This, over time, will permit them to develop similar business in their own towns. The IZ wall concept should be adopted by the US Congress for the border between Mexico and the US. It would benefit the Mexican economy, and at the same time, would prevent the border security problems cited by Trump. The IZ wall is a win-win solution, far more than the Mexican maquiladoras (assembly plants that import materials and equipment without duties or tariffs). The spillover effects are important for Mexico, which is much less economically developed than the US.Moreover, the IZ wall is not very costly, since businesses pay rent to gain access to workers. Although small, these rents reduce the cost of construction. The first $5 billion demanded by Trump could build the first 500 miles of the wall. Since compromise is necessary in all negotiations, I would suggest starting with financing 300 miles at a cost of $3 billion.I hope Democrats and Republicans will realize that a compromise is necessary on such a touchy subject. The IZ concept would allow both parties to claim at least partial victories. An IZ wall would lead to economic growth and border security. While it would be a wall, as Trump wants, it is also an industrial zone that would represent hope for the Mexican people, which would mean both Democrats could feel proud voting for it.Finally, a compromise on the wall would halt the US government shutdown. And there is a need to find a way to do this rapidly, because the longer the shutdown continues, the more the economy is being hurt.I look forward to Democrats and Republicans voting for an IZ wall, a wall that can lead to security, cooperation and economic development.The writer is head of the Aharon Meir Center for Economic Policy at Bar-Ilan University specializing in international trade, and economic growth. She developed the theory of leapfrogging with Nobel prize laureate Paul Krugman.