Palestinian propaganda juggernaut has persuaded world public opinion that the term “refugee” is synonymous with the term “Palestinian.” 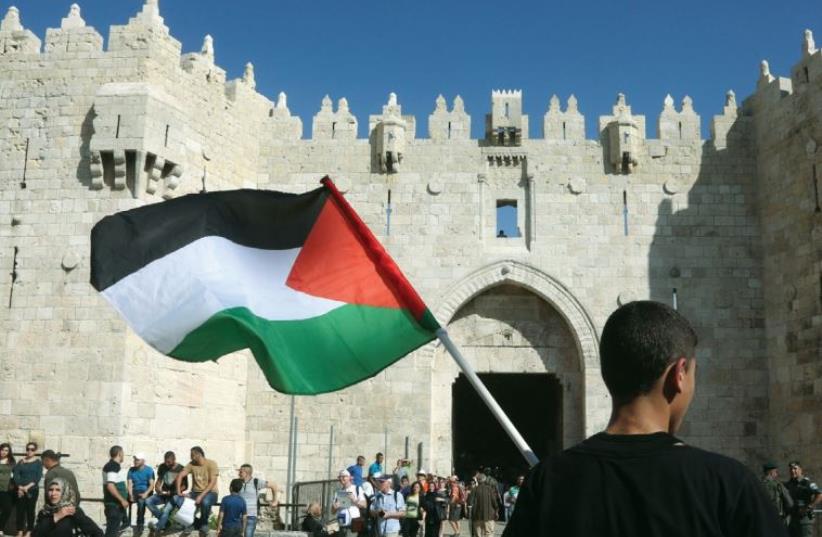 Damascus Gate on Nakba Day (May 15)
(photo credit: MARC ISRAEL SELLEM/THE JERUSALEM POST)
Advertisement
On November 30, the Israeli Mission to the UN held an event to honor the untold stories of some 850,000 Jewish refugees who were forced to flee their native Muslim countries following the creation of the State of Israel in 1948.This annual commemoration could become a key to resuming peace talks with the Palestinians, if it is utilized to resolve the refugee issue – Palestinian and Jewish refugees – once and for all and remove it from the agenda, where it has been another obstacle to overcome.This is not going to be easy. While there have been several legislative gains on the issue, both in the US and Israel, the Palestinian propaganda juggernaut has persuaded world public opinion that the term “refugee” is synonymous with the term “Palestinian.” A massive counter effort is required, not by the usual perpetrators of the unfortunately named “public diplomacy,” but by public relations professionals.The Palestinian Nakba narrative must be seen in direct parallel to the Jewish Nakba. The basic facts of the history of this conflict must become known so that the world recognizes that two peoples suffered and were uprooted.To do less would be to accept wholesale the narrative of unique suffering that the Palestinian national movement has been using as a propaganda weapon for decades.More to the point, the Palestinians have made a growth industry out of refugeeism. The United Nations estimates that, upon the creation of the State of Israel in 1948, 726,000 Palestinians became refugees. In 2012, the number of registered patrilineal descendants of the original “Palestine refugees” was estimated to be 4,950,000, according to UNRWA.No other people in the world are considered fourth-generation refugees. This is one delusion that must be dispelled before this issue can be resolved. Unfortunately, it has become part of a basic package of Palestinian delusions that must also be overcome. The principal one is that we don’t belong here from time immemorial; another would require the Palestinians to accept responsibility for causing the Palestinian and Jewish refugee problems in the first place, and accept UN Resolution 181 that was meant to create the original two-state solution.According to Jews for Justice from Arab Countries, at the same time Palestinians were suffering their Nakba, Arab and Muslim states displaced 856,000 Jewish citizens, in many cases seizing their personal and communal assets.Around two-thirds settled in Israel, arriving as penniless as were the Palestinian refugees moving in the opposite direction. The difference, to the unacknowledged shame of the Muslim world, was that Palestine refugees were kept in camps as a weapon against Israel, while Israel welcomed Jewish refugees as new and productive citizens.The idea of focusing on the nearly one million Mizrahi Jews whom Israel absorbed from Muslim lands is not new.In the 1970s, the Foreign Ministry began to deal with the matter, but the powers that be decided that the time wasn’t ripe to concentrate on the Palestinian refugee issue.In what was called in April 2012 a “sea change” from its traditional diplomacy, the Foreign Ministry decided to put the issue of Jewish refugees who fled Muslim countries after 1948 at the top of its agenda. “A true solution to the issues of refugees will only be possible when the Arab League will take historic responsibility for its role in creating the Jewish and Palestinian refugee problem,” it stated.The ministry calculates for the record that the 850,000 Jews uprooted from Arab countries since the State of Israel was founded lost assets of about $700 million (some $6 billion at today’s prices). While millions of fourth-generation Palestinian refugees are still living in camps scattered throughout the Middle East nearly 70 years later, nearly half of Israel’s population today is made up of former Jewish refugees and their descendants, the ministry noted.UN Ambassador Danny Danon recently pointed a finger at the world body for differentiating between Palestinian refugees and Jewish refugees from the same conflict. Jewish refugees, he noted, “do not have a special UN agency, and several UN organizations acting as a lobby on their behalf.”The time has come for the world to recognize that the displacement of Palestinians and Jews as a result of Israel’s War of Independence against a half dozen invading Arab countries amounted to an exchange of populations, and to classify it so retroactively, so we can move on to making peace.