The only democracy... right

"The occupation and control over millions of unprotected Palestinians are what will inspire the acts to come – indeed, will be their raison d’etre." 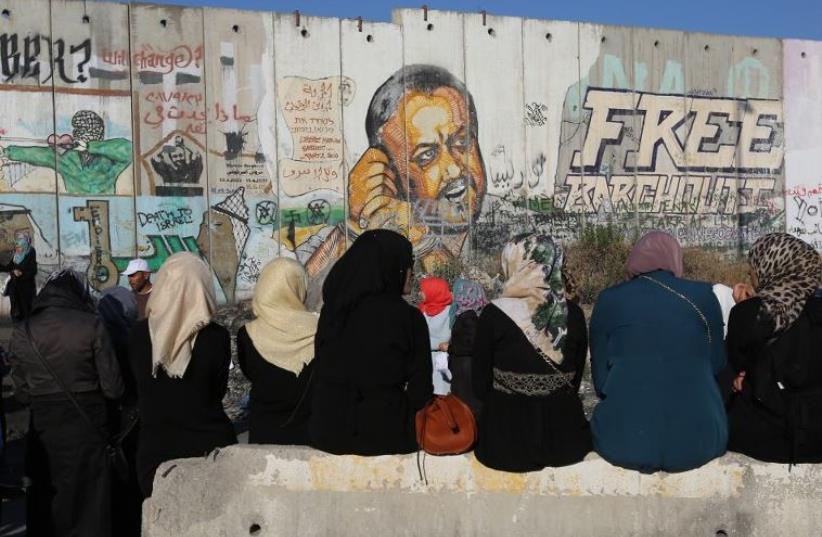 Palestinian women sit near a section of Israel's separation barrier at Qalandia checkpoint in front of a painted mural of Marwan Barghouti
(photo credit: AFP PHOTO)
Advertisement
With the end of the Knesset session last week, another phase in the degeneration of Israel’s legislature was completed. In a technocratic innovation, odious scaffolding that appeared in act one was used to construct new edifices in act two, and more is doubtless to come.Amendment No. 28 to the Entry into Israel Law, passed this month, introduced a screening process for foreign nationals seeking entry into Israel, based on their political convictions. Supporters of a boycott against settlements will be barred from entering both the sovereign territory of the Israeli democracy and the territories it controls. The groundwork for this law was laid in 2011, when the Law for the Prevention of Damage to the State of Israel (known as the “Boycott Law”) was passed. The definition introduced in that law was used as the basis for the current amendment.Another bit of scaffolding, the concept of “an organization that gets most of its funding from a foreign state entity,” was first introduced in the amendment made to the Not-for-Profit Associations Law in the summer of 2016. At the time, the move to single out certain nonprofits was pitifully excused as a means to promote “transparency.” But since then, it has served as the basis for a variety of bills that have nothing to do with transparency – in fact, just like the original amendment. The recently concluded parliamentary session saw the implementation of phase two: having laid the groundwork last summer, the Knesset proceeded to now deny National Service volunteer posts from the targeted organizations.Or, take Amendment No. 40 to the Budget Foundations Law (known as the “Nakba Law”), which introduced a glorious new democratic principle: “reduced funding or financial support due to actions against the state’s values.” The amendment passed in 2011, years before Minister of Culture Miri Regev invented “freedom of funding” (meaning, the government’s freedom not to fund). And that law is now the intellectual building block on which other tests of “patriotism” in the arts are currently being constructed, and the basis for new amendments to criteria for state support – or its denial – for cultural institutions.The viruses injected into laws in the first act may not have seemed too dramatic; a handful of definitions, some new possibilities. But, in spirit and in practice, they set the stage for using Israeli law to officially brand traitors (i.e., anyone who disagrees with the government line) and to employ sanctions against them on a purely political- ideological basis. Now that this scaffolding exists in Israeli law, the possibilities are endless.The whole thing is so brazenly unconvincing, that the humorous predictions almost write themselves. How about a “Law of Double Fees for Organizations that Get Most of their Funding from a Foreign State Entity”? Well, that is actually a bill already drafted by MK Shuli Moalem of the Bayit Yehudi party. The thing is, the joke is on us. With so many rotten ideas already legislated and introduced into Israeli consciousness, the cumulative damage cannot be overstated.With characteristic cowardice, the justices of the Supreme Court failed to keep the floodgates from opening. The 2011 Boycott Law and the Nakba Law are particularly shameful examples of blatantly unconstitutional laws, approved by justices whose grit is as feeble as the moral basis for the laws they were called to adjudicate. If a law will be passed to “Ban Apartheid Objectors from Publicly Subsidized Swimming Pools” (why should the taxpayer pay for their fun?!), the court would probably dismiss a petition against it, too – because it will be “too soon to rule on the issue,” or out of sheer intellectual weakness, or for tactical purposes – so that our precious defender-in-theory of eternal democracy, the High Court of Justice, can continue to protect itself, and to hell with human rights.This text cannot end without addressing the overall construct, the one that we have all been serving for 50 years. The construct that has bastardized any democratic concept of equality, rights or political participation. The one that has legally sanctioned almost every abomination – from punishing innocents to whitewashing the killing of innocents. The mutation of military orders, “the rule of law” and democracy for Jews wherever they may be between the River Jordan and the Mediterranean, coupled with wholesale legitimization of the vulnerable, exposed, transparent status of millions of Palestinians living under Israeli control. The multitude of rules, orders, judgments and regulations in a formalistic sense that has nothing to do with justice. Act two in 2017, which follows act one of 2011, originated in 1967. The occupation and control over millions of unprotected Palestinians are what will inspire the acts to come – indeed, will be their raison d’etre.The writer is executive director of B’Tselem – The Israeli Information Center for Human Rights in the Occupied Territories.