The Owl: Not everything about Purim is funny

One of the overriding lessons of a holiday in which so much seems arbitrary is the need for order and law. 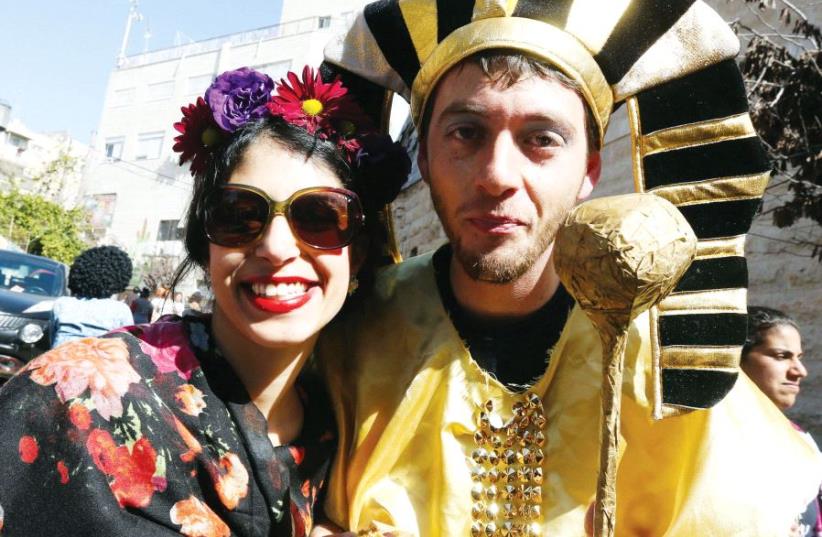 Purim celebrants in Jerusalem
(photo credit: MARC ISRAEL SELLEM)
Advertisement
Recently, a comedian interviewing random Israelis Jews on the street asked what Purim means for them. Far from being a scientific sample, they were a very diverse group: older and younger, men and women, religious and secular. Obviously, the questions were far from being serious, and most of them were intentionally designed to provoke a funny answer.Among other things, the comedian asked why we are celebrating the mass slaughter of 75,000 people in Persia. The answers could be divided to two main groups: those who saw Purim as a patriotic, religious or national holiday, celebrating the redemption of the Jews and the destruction of their enemies. Some, certainly a minority, saw this revenge as immoral. In all cases, the Jewish people, as a victim or as an avenger, was the focus of the answer. For me, however, the real meaning of Purim lies elsewhere. Personally, I don’t see the message of the holiday as pertaining to Mordecai, Esther or the Jews, but to King Ahasuerus and his hellish system of government.In all seriousness, there is nothing particularly Jewish in the Scroll of Esther.The monotheistic God, for example, is not mentioned even once. At heart, this is not a story about Jews and gentiles, but about courtly politics. A minister is trying to avenge a personal enemy from a religious minority group and extends his revenge to the entire tribe. The dim-witted king concurs, but the plan is foiled by the cunning, beautiful concubine from the threatened group. Take any other minority that lived in the Persian Empire at that time, and the story will remain the same.If there is an actual lesson that we can take from the Megila, it is less the particular story of the Jews, and more the hazard of ethnic politics combined with government arbitrariness. Read the scroll carefully, again and again, and you will never find a character who thinks about the public good – even for a fleeting moment.Ahasuerus is not only an absolute king, but a tyrant who decides the fate of multitudes on a drunken whim, forgets about his orders, manipulated by the last minister or concubine who whispers in his ear, and as a result sends his subjects to slaughter one another.Haman, the main antagonist of the Megila, doesn’t have any solid anti-Jewish ideology. His hatred for the Jews is only an extension of his desire to avenge Mordecai, who sullied his honor by refusing to bow down before him.Mordecai, too, does not care about anyone outside of his religious group, even when he becomes Ahasuerus’s great vizier.Compare him to Joseph, another biblical figure who served as a gentile king’s minister, and see the difference.Joseph cared deeply for Pharaoh, his lord, and the economic welfare of the Egyptian kingdom. When the scroll refers to Mordecai’s tenure as Ahasuerus’s minister, the only achievements described are particular benefits for the Jews. For the characters in the Megila, all of them, nothing is public and everything is personal.In such circumstances, both Haman’s attempt to slaughter Mordecai and the Jews, and the latter’s indiscriminate bloody revenge, take a completely different meaning. Both are the results of living in a highly volatile, arbitrary system, where fates of entire groups can radically change on a whim, without rules and reasons. In such an unpredictable society, one can never know what the morrow may bring. Therefore, when you have a chance to slaughter your enemies, you take it. When you have a chance for self-aggrandizement, you take it – whatever the price, and destroy anyone that stands in your way.Even if you are the kindest person, you cannot behave otherwise, because a living enemy may whisper your destruction into the ears of a drunken king tomorrow. In the world of the Megila, it is not necessarily viciousness that breeds extreme cruelty but unpredictability and insecurity. In the absence of rules, antagonistic groups cannot really live in peace with one another or contribute to the common good.If you don’t stick with your tribe, nobody will protect you when the direction of the wind is changing.So whenever you hear someone speaking with disdain on objective rules, boring procedures, “rotten” compromises and all the rest of the stuff of modern politics, remember the court of Ahasuerus.Today, too many populist politicians, in the White House and beyond, instigate their supporters to trample such rules in order to peruse personal or group interests.Such instigation works especially well for groups that feel disempowered or disadvantaged by the existing rules, procedures or power relations.In the absence of rules, arbitrariness abounds, and even if you win, who knows what will happen tomorrow? Remember the Megila: one day, Haman was an all-powerful potentate, and several hours later, a corpse hanging on a tree. The Jews were threatened with extermination, and a few days later they were on the slaughtering side, only because the whim of the king changed. So here is the real lesson of the scroll: don’t let yourself be ruled by an Ahasuerus or any such person – only by rules and laws.Then, you wouldn’t need a Mordecai and Esther to save you.■ The writer is a military historian and a senior lecturer for general history and Asian Studies in the Hebrew University of Jerusalem.His latest book, The Plots against Hitler, was recently published by Houghton Mifflin Harcourt.