Tough measures are needed toward the Islamic Republic. 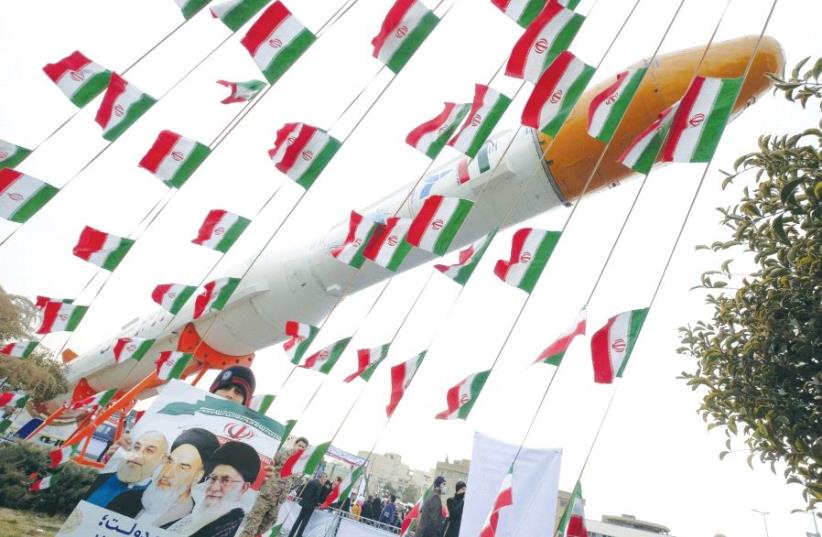 THE ISLAMIC Republic must stay at the top of the US State Department’s list of state sponsors of terrorism.
(photo credit: REUTERS)
Advertisement
We personally know of Iranian-Americans from Muslim families who voted for Donald Trump. Within that circle, we also know of a smaller circle who consider Radical Islam to be a blight on Persian greatness. These facts steer us toward recommending how President Trump should deal with the Islamic Republic of Iran – and with the Persian people over whom that theocratic regime unfortunately rules.Here we are offering a particular understanding of Persian greatness. We are not advancing the silly royalist views, still popular in some quarters in California, of the illiterate colonel Reza Shah, whose ersatz creation of a Pahlavi dynasty in the twentieth century spuriously claimed an ancient Persian pedigree. No, we are referring to something that goes back thousands of years, and that precedes both Islam and Christianity.We are talking about virtues such as strict education, regular habits, simplicity, piety, love of nature, endurance and order; values that supported the superb Persian projects of poetry, architecture, jewelry, chess, carpets, gardening and cinema; principles of government that earned respect even in the cradle of Western civilization – ancient Greece.For us, classical studies and historical memory remain essential elements of international statecraft. To ponder the career of Alexander of Macedon or to read the writings of Herodotus, Xenophon or Aeschylus is to come away with a deep appreciation of Persian culture. Alexander’s court historian (Arrian) emphasized that the conquered Persian empire had drawn its strength from its strict morals. The Greeks’ appreciation was passed down through the centuries to the British, the last colonizers of the Persians. During the British empire it made perfect sense for somebody destined to become a prime minister, Sir Anthony Eden, to study Persian as the main part of a degree in oriental languages.Now, for the American empire, it is time for the president to take up the Persian baton.There is no question: the president must draw hard lines in dealing with the Islamic Republic. But the president should also show a softer side. Above all, he should publicly highlight the great achievements of the Persian tradition. Such praise will create the sweet-andsour taste familiar, and pleasant, to the Persian palate.In other words, while Trump carries the big stick to the Middle East, he should sing about Persians with “yuge” kindness. A nationalist like the president should recognize and appeal to the nationalism of another great people.Tough measures are needed toward the Islamic Republic.The Islamic Republic must stay at the top of the US State Department’s list of state sponsors of terrorism.Iran should face new sanctions for its ballistic missile tests and other hostile actions. Efforts at limiting immigration from the Islamic Republic may be helpful.The US must sternly enforce the nuclear deal that the past administration negotiated with Iran – and if the Iranians do not fully and unhesitatingly keep their end of the bargain, then military options should be on the table.But this strategy should be complemented by a charm offensive: kindness will serve as gift-wrapping for the tough measures. On the first day of spring, also the pre-Islamic Persian New Year enormously popular in Iran, we imagine President Trump quoting a few lines of Persian poetry, Hafez, Saadi or Rumi, to be stored and distributed by the White House website, on Youtube and other sites. Coming from Trump, the message would be intriguing, mysterious and complex – downright Persian. From Obama, it came across as simple, naïve and desperate.Trump has already taken some steps to court the Persians. During the campaign, when commenting on the nuclear deal, he said “the Persians are great negotiators.” Trump meant that the Americans, who had not read his Art of the Deal, got hustled. Yet the Persians, proud and singular in their region, can easily accept Trump’s statement as praise for the negotiating techniques they honed over thousands of years. Trump, they might say, knows how to buy a carpet at a fair price.Going beyond the simple dualities between Christians and Muslims, Trump might praise the Zoroastrians, a religious minority in Iran. Zoroastrians predate Muslims by centuries, and are often associated with the enlightened rule of ancient Persian kings. Trump’s talk about these fire-worshipers, cunning and perverse, would be a psychological tactic that could leave even the Supreme Leader of Iran speechless.Trump’s courtship of the Persians, as distinct from tough measures toward the Islamic Republic, might even create a certain fondness for him. The Persians, after all, might decide that Trump “gets” them, that he is actually a kind of Persian himself. There is classical precedent for this move.Centuries earlier, to take the shame away from Macedonian conquest, the Persians decided that Alexander was really one of them. Trump’s name, you see, offers clues to a people always searching for hidden meanings.Trump’s middle name, John, means “dear” or “soul” in Persian. And Persian parents, unaccustomed to referring to their boys only by given names, almost always add “John” in their speech. That is how a Cyrus becomes “Cyrus John” or a Darius becomes “Darius John.” To the Persians, Donald John Trump should become the “dear” American president.In The Art of the Deal, Trump wrote: “I like thinking big. I always have. To me it’s very simple: if you’re going to be thinking anyway, you might as well think big.Most people think small, because most people are afraid of success.”When it comes to dealing with the Iranians, we urge Trump to think very big indeed.Afsheen John Radsan is professor of law at the Mitchell Hamline School of Law. Robert Delahunty is LeJeune Chair and professor of law at the University of St. Thomas School of Law. Both authors live in Minnesota.