By 1961, over 30,000 more Jews made the perilous journey from Morocco to Israel, weathering freezing seas and subhuman conditions in their hope to reach the Promised Land. 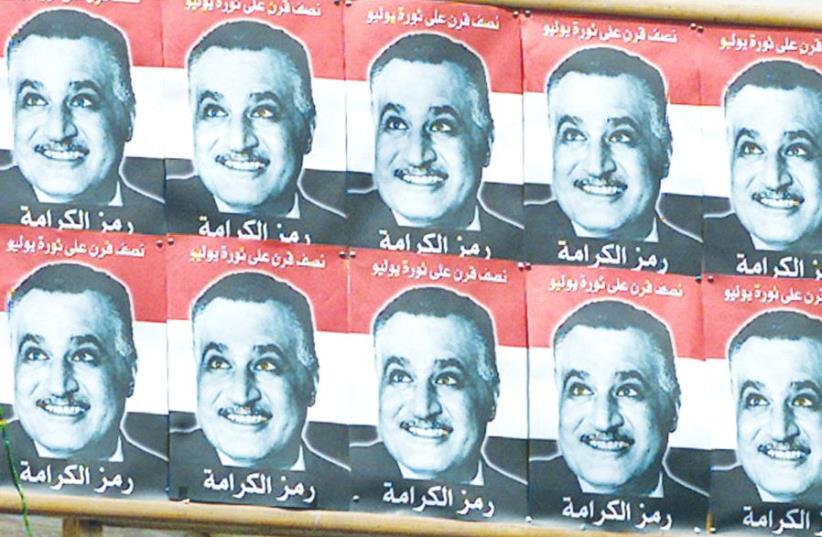 A BILLBOARD with images of former Egyptian president Gamal Abdel Nasser, who pressured Morocco to prevent immigration to Israel.
(photo credit: REUTERS)
Advertisement
On January 10, 1961, 44 Jews stood in the freezing night on El-Hociema beach in northern Morocco, waiting for a boat. They had traveled from Casablanca, taking with them only the barest essentials, as they had been instructed by the Mossad. As the boat approached, they could barely make out the word “Pisces” – changed to “Egoz”in Hebrew, on the boat’s renovated hull. After 12 undercover voyages bringing Jews to Israel via Gibraltar, the boat had undergone massive renovations to make it seaworthy. Still, there were doubts it was fit for the journey, but there were no other boats to be had and the need was great. Forty-four men, women and children boarded the boat, dreaming of seeing Israeli shores. Forty-four men, women and children drowned two hours later.The danger of the trip to Israel was not lost on the passengers of the Egoz. Thousands of Moroccan Jews had been making the perilous journey even before the reestablishment of the Jewish state. Throughout the centuries of Diaspora the yearning to return to Israel had been a central part of the ethos of the Muslim world’s Jews. After Israel’s decisive victory in the War of Independence, the Arab world intensified the persecution of Jews by seizing lands and properties, boycotting Jewish businesses and banning them from leaving the country lest they return to Israel. This wave of persecution created over 850,000 Jewish refugees who then became citizens of the young Jewish state.In Morocco, the story was a bit different.King Mohammed the Fifth, who some say had favorable views of his kingdom’s Jewry, continued to allow aliya. Moroccan Jews, raised on passionate Zionist ideals, had been making aliya in great numbers – over 72,000 Moroccan Jews made aliya between 1948 and 1955 – and still over 200,00 Jews remained in Morocco.In 1956, Egyptian president Gamal Abdel Nasser began pressuring Morocco to stop allowing Jewish return, reportedly saying to king Mohammed “every Jew you allow to leave becomes a soldier.” In the days of the War of Attrition and rising Pan-Arabism, king Mohammed could not refuse president Nasser, and the aliya efforts went underground. Secret immigration continued, with Moroccan authorities unofficially adopting a very lax enforcement policy.By 1961, over 30,000 more Jews made the perilous journey from Morocco to Israel, weathering freezing seas and subhuman conditions in their hope to reach the Promised Land.The Egoz tragedy was the catalyst for a new arrangement. Morocco, always more attuned to the Western world than other Arab countries, began facing pressure from France and the United States to stop preventing Jews from leaving to Israel and to an establish an organized channel for departure. Thus, an agreement was reached between the king and the leaders of Morocco’s Jewish community, with American and French involvement and the oversight of the Israeli government, to allow the immigration of Jews out of Morocco to any country except Israel. This agreement was the precursor to Operation Yachin, under which over 80,000 Jews made aliya to Israel through a third country, mainly France and Gibraltar.On Januray 9, a night before the departure of the Egoz, another family made the perilous journey across the Mediterranean to their homeland. My family, immortalized in a photo of them waiting for the next ship on the shores of Gibraltar, ended their journey home in the northern town of Hazor Haglilit, with nine children who have since begotten dozens of proud Israelis. Though they left Morocco in the dead of night with nothing but their heaviest blanket, the word “refugee” was never heard in my father’s house. Making aliya through choice and not for a lack of it, this Moroccan family, like thousands of others who make up Israel’s diverse nation, has never looked back – they are home.The author is an Israel activist and the civil affairs executive for StandWithUs. @giladkabilo