The gradually developing triad of powers in the Middle East is a challenge to Israel’s foreign policy. 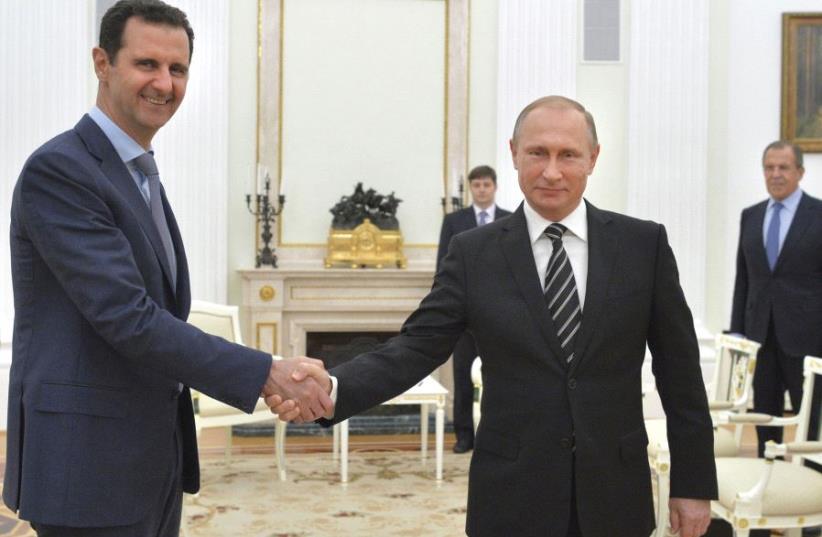 RUSSIAN PRESIDENT Vladimir Putin (right) shakes hands with Syrian President Bashar Assad during a meeting at the Kremlin in Moscow in 2015.
(photo credit: REUTERS)
Advertisement
The Middle East – from Morocco to Afghanistan and from Turkey to Yemen – has served since the dawn of history as a scene of fighting between powers. Even in modern times, the Levant and its surroundings are regions of geostrategic importance to global powers or those wishing to assume global standing.The presidency of George W. Bush was characterized by deep American involvement in the region, including initiating two wars in Afghanistan and Iraq. His successor, Barack Obama, relinquished the region to a great extent while Russia and China expanded their involvement. Trump is leading an American rapprochement with the region, which will soon form a triad of powers in the Middle East, with the United States, Russia and China competing over territory and influence, natural resources and profits, and increasing military power and acquisition of allies.Vladimir Putin’s Russia is a poor but well-armed power that is attempting to reestablish its former standing on the global scene. Apparently, Moscow is basing its strategy on the heartland theory, as developed by British researcher Halford John Mackinder in the early 20th century. The theory argues that a power that is attempting to gain global standing must increase its foothold in regions of geostrategic importance for their times, which today include Europe and the Middle East.Due to its economic limitations, Moscow is acting in three ways: expansion in former Soviet Union countries (such as Ukraine), increasing its presence in its former client states in the Middle East (such as Syria and in the future possibly Libya too), and cheap cyber warfare for advancing its global interest (as it apparently did in the last elections in the United States and France).China, in contrast, is a very rich power that lacks in significant military strength. On the way to its global status, Beijing is following a patient, long-term strategy. It would seem that Chinese policy makers have opted to adopt Alfred Thayer Mahan’s sea power theory from the late 19th century, but with necessary adjustments. While the theory states that a power that is attempting to gain global standing must hold and defend global sea trade routes, China is acting differently: before developing strong marine power, Beijing is investing hundreds of billions of dollars in building infrastructure in dozens of countries, focusing on acquisition and construction of commercial ports along international sea trade lines, such as the acquisition of a commercial port in Greece, which today is operating under Chinese ownership.Trump’s United States has not yet developed or presented a comprehensive global strategy. It would seem that the new administration is gradually adopting a combined strategy. The US is allowing Russian military activism and Chinese economic activism in the Middle East; at the same time, Washington is increasing its efforts on multiple fronts: strengthening ties with Washington’s traditional allies (such as Saudi Arabia and Egypt, South Korea and Japan); investing efforts to solve the Arab-Israeli conflict and remove the strategic threat posed by North Korea; and projecting global power in the Pacific (against North Korea) and in the Middle East (such as US bombing of Syria after the regime used chemical weapons in the Idlib Province, as well as dropping the “mother of all bombs” (MOA B) on an Islamic State stronghold in Afghanistan).The gradually developing triad of powers in the Middle East is a challenge to Israel’s foreign policy.Until recently, Israel has been required to manage its regional foreign policy in coordination with just Washington, but the evident change in the region will require Jerusalem to factor in Moscow’s security considerations and Beijing’s economic ones too.The developing triad of powers does pose a major challenge for Israel, but at the same time it is providing it many opportunities for improving its regional standing.

The author is a geostrategist and international security policy and Middle East expert at the Interdisciplinary Center (IDC) Herzliya.
Advertisement
Subscribe for our daily newsletter