The unknown legacy of a Japanese hero: Chiune Sugihara

Against orders from the Japanese government, Consul Sugihara issued the Jews of Kovno thousands of transit visas, allowing the recipients passage through the Soviet Union and Japan. 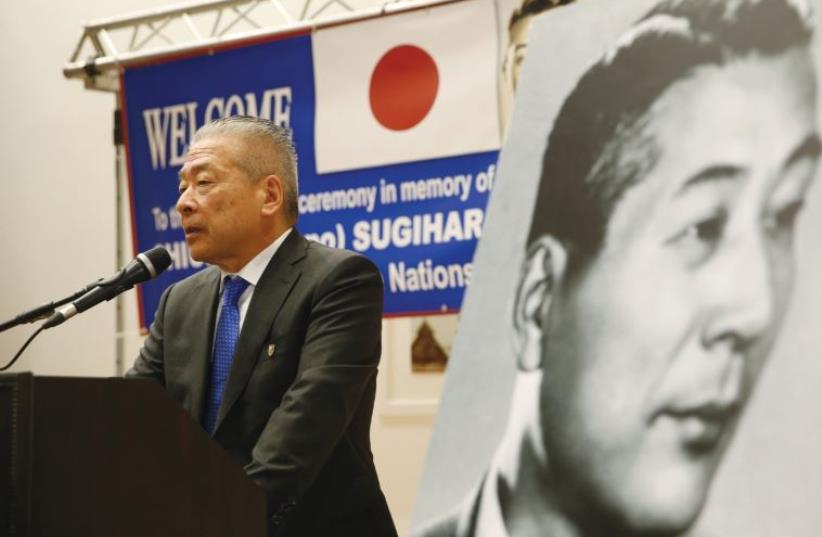 NOBUKI SUGIHARA, son of Japanese diplomat, Chiune Sugihara (in black and white picture), who helped save thousands of Lithuanian Jews in World War II, speaks during a street-naming ceremony in honor of his father in Netanya, earlier this month.
(photo credit: REUTERS/BAZ RATNER)
Advertisement
Kovno, Lithuania. Summer of 1940. Lithuania had just been annexed to the Soviet Union, and Consul Chiune Sugihara of Japan, along with all other diplomats in Kovno, had been told to leave Lithuania by the end of August. As he was packing his family’s belonging, Consul Sugihara was told that a Jewish delegation was eagerly waiting for him outside, with a desperate request. Thus began the rescue of over 6,000 Jews from war-torn Europe.Against orders from the Japanese government, Consul Sugihara issued the Jews of Kovno thousands of transit visas, allowing the recipients passage through the Soviet Union and Japan, to find refuge in different places around the globe at a time when the world was closed to Jews. He wrote out hundreds of visas a day, working 20-hour days until his forced departure. Even as he boarded the train, Consul Sugihara was still signing documents and throwing them out of the cabin window. It is estimated by the Simon Wiesenthal Center that the descendants of the Sugihara Visas survivors exceed 40,000.This week, StandWithUs Asia had the honor of taking part in the visit of Consul Sugihara’s only living son, Nobuki. The trip began as a modest effort to secure Israeli support for a small monument to his father in Fujisawa, where Consul Sugihara lived after the war, and quickly became a tour of Israel to meet the grateful descendants of the Sugihara survivors, with stops in Jerusalem, Tel Aviv, Haifa and Netanya. Though it was covered extensively by Japanese press, there was little or no mention of the visit in Israel.Sadly, Sugihara’s story still remains widely unknown today. We spare no expense in teaching about the Holocaust, yet an Israeli high school graduate would be hard-pressed to recognize the Sugihara name. This is a product of the eurocentric emphasis in the way we teach history to our children, and represents a missed opportunity to connect young Israelis with a broader view of the world in general. It is a valuable lesson in the power of one person who followed his conscience and did what was right in an impossible situation.Furthermore, the memory of Sugihara is a potential bridge to relations with the Japanese people, who are eager to see points of light in the darkness of World War II.Sugihara’s deeds are regrettably not alone in their obscurity – another Righteous Among the Nations, Consul Ho-Feng Shan of China, who issued transit visas to thousands of Jews against orders, is also a name rarely heard when discussing the Holocaust in Israel, and the unbelievable story of how 1,200 Jews fled Germany to Manila is also one rarely retold. European figures like Anne Frank and Oskar Schindler are studied and memorialized often, yet when it comes to East Asian heroes, things seem easier to forget.Consul Sugihara returned to Japan and was fired from the Japanese Foreign Office for his actions. He supported his family by doing menial tasks until his death in 1986, one year after the State of Israel named him “Righteous Among the Nations.” His friends and neighbors only found out about his deeds when a delegation of Jews, including the Israeli ambassador, arrived at his funeral to pay their respects. Sugihara deserved better, and we should not let his name fall into obscurity after he lost everything to save us when we needed it most.The author is the Asia director for StandWithUs.