The unused weapon of mass instruction

The West currently treats Muslim “grievances” as rational. Thus the extremists seem to come from nowhere. They do not. 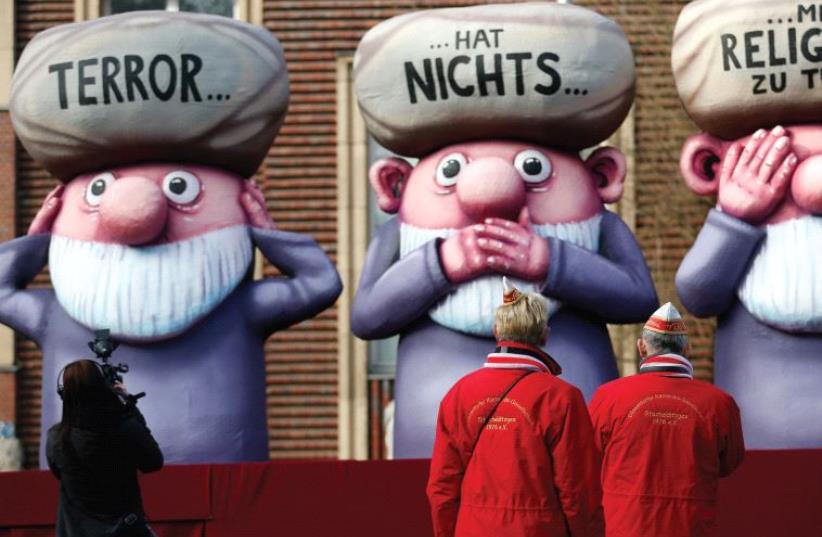 THIS FLOAT at a German parade has the words ‘Terror has nothing to do with religion’ written on three mullahs (monkeys). (
(photo credit: REUTERS)
Advertisement
As a result of this summer’s jihadist terrorist attacks in France and Germany, public discussion has become yet more urgent about how to combat Islamist radicalization.Over the years, many explanations for Islamic terrorism have been advanced to show that it has in fact nothing to do with Islam.These have included poverty, social exclusion, Islamophobia and “grievances” over conflicts such as Bosnia, Kashmir, Iraq, Chechnya, Palestine and now Syria.To the Western mind, these “grievances” have no common factor – even while the terrorists, along with other jihadis burning Christians alive in Africa or slaughtering civilians from London to Paris to Tunisia, scream “Allahu akhbar” as they commit atrocities in the name of Islamic holy war.The rise of Islamic State, committed to establishing a Muslim caliphate, exposed the vacuity of such thinking. Why were tens of thousands of young Western Muslims signing up to an Islamic supremacist death cult? In scrabbling for an answer, Western politicians still determined to deny the reality of religious fanaticism were sure about one thing. Islamic State was “un-Islamic” or even “anti-Islamic.” Religion couldn’t be the cause of such depravity.In the wake of this summer’s attacks, fresh explanations have been heard. If the terrorists appear to have acted alone (which usually turns out not to be the case) they are “lone wolves” and therefore not jihadi foot-soldiers. If they appear to have a psychiatric history, they are said to be mentally ill and therefore not jihadi foot-soldiers.Of course this is absurd. It is perfectly possible to act alone or be mentally disturbed and still be a jihadi foot-soldier.Indeed, jihadi recruiters specifically target disturbed people.This gets to the point about radicalization.It is not some cartoonish, one-dimensional process. It is complex. It wouldn’t happen without Islamic ideas, but those are the combustible tinder. The sparks come from elsewhere.Jihadi ideas become explosive when young Muslims are vulnerable. This is often due to an acute sense of rootlessness and cultural dislocation, a disgust with their hedonistic lives in the West and a deep need for an elevated purpose to their existence.The spark, however, is their overwhelming sense of grievance. This is where Western governments are missing a trick through a profoundly misguided analysis.They think that if the world’s conflicts involving Muslims are solved, radicalization will end. That’s why they pressure Israel to facilitate a state of Palestine which they think would draw the poison of Muslim rage.They’ve got it precisely the wrong way round. It is the poisonous Arab and Muslim rage against Israel and the Jewish people that prevents a solution to that Middle East conflict.The crucial point about the grievances felt by so many Muslims against Israel, the Jews and the West is that they are all based on lies. These are so incendiary it would be amazing if they did not incite violent feelings of hatred and vengeance.Millions of Muslims believe the lie that the Palestinians are the indigenous people of the Land of Israel. So of course they are enraged that “their” land has been “stolen” by the Jews.They believe the lie that the West intends to destroy the Islamic world. So of course they think Muslim attacks on the West are justified as self-defense.They believe the (religiously inspired) lie that the Jews are a cosmic evil. So of course they are inspired to slaughter the Jews wherever they find them.Moreover, their crazed belief in demonic global Jewish power controlling America and thus modernity is the most important factor fueling the onslaught against the West.These and other similarly paranoid fantasies are the “grievances” which drive so many young Muslims into the arms of the jihadis. Any effective counter-radicalization strategy must therefore tell Muslims facts to force open their eyes.Western leaders should be telling them, for example, the historic truth that the Jews are the only people for whom Israel was ever their national homeland.They should be telling them that the IDF sets a moral standard no Western army would ever match in trying to avoid killing innocent civilians, even to the extent of inflating IDF casualties.They should be telling them that a characteristic of Islamic thinking, based on the doctrinal perfection of Islam, is to invert reality and thus turn Islamic attack on Israel and the West into defense and vice-versa.They should be telling them that those setting out to murder Muslims are other Muslims, and that the lies told about Israel and the West are designed to protect tyrants by diverting the rage of the people they have enslaved.If these and other truths were told, the Islamist grip on the minds of Western Muslims who hear nothing but Islamic propaganda would start to weaken.Of course, this would not by itself solve the problem. Reason is no antidote to fanaticism. But many young Muslims are being radicalized not by piety but by political lies, which at present are not only unchallenged but actually amplified by the West’s self-destructive media and political echo chamber.The West currently treats Muslim “grievances” as rational. Thus the extremists seem to come from nowhere. They do not.They are created and sustained by a narrative of lies. Counter-radicalization must involve telling Muslims the truth – the West’s unused weapon of mass instruction.Melanie Phillips is a columnist for The Times (UK).