We hope the addition of Yisrael Beytenu is not simply a tactic being used by Likud to improve its chances of political survival. 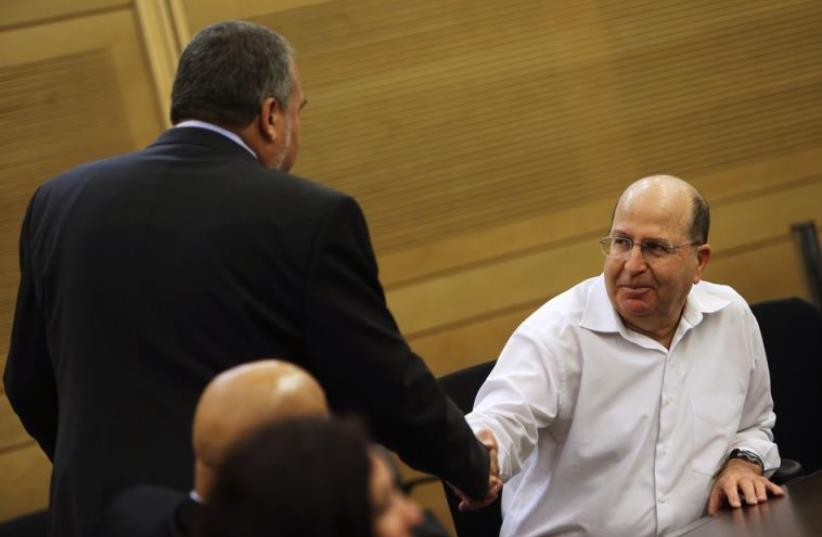 Moshe Ya'alon (R) shakes hands with Avigdor Liberman at the Knesset in Jerusalem
(photo credit: REUTERS)
Advertisement
With dizzying speed and over the span of just a few days one political upheaval after another dominated the nation’s attention. At the beginning of the week, it seemed that the Zionist Union’s Isaac Herzog and Prime Minister Benjamin Netanyahu were on the verge of signing an agreement that would allow Herzog’s party to join the government.The resulting partnership was seen as not just a means of widening the narrow coalition, but a step that would add dovish voices to a decidedly hawkish government.Then, in a sudden about-face, it emerged that Netanyahu and Avigdor Liberman had reached an agreement that opened the way for Yisrael Beytenu to enter the government. Instead of a more centrist political leadership, Israel’s right-wing coalition would instead be fortified by the addition of a politician who has repeatedly attacked Netanyahu’s government from the Right. Liberman would receive the Defense portfolio which would be taken from Moshe Ya’alon, one of the Likud’s more centrist ministers. Ya’alon came under attack in recent weeks from right-wing politicians such as Education Minister Naftali Bennett, Liberman and Likud ministers for siding with IDF officers critical of Israeli society’s approach to war ethics and rules of engagement.Admittedly, the logic behind bringing Liberman into the government is more convincing than the incorporation of the Zionist Union in Netanyahu’s right-wing coalition. Differences between the Zionist Union and the present government over economic policies, issues of state and religion and the Israeli-Palestinian conflict, would have generated tension and possibly lead to the government’s collapse.In contrast, Liberman began his political career in the Likud. During Netanyahu’s first stint as prime minister, Liberman served as the PMO director-general. Until July 2014, the Likud and Yisrael Beytenu were members of a joint faction. The ideological differences between the parties are minor. Therefore, Yisrael Beytenu’s addition will likely add stability to what was a coalition with a razor-thin majority.We have argued in favor of broadening the coalition for the sake of stability. Governments that live out their terms tend to be more successful at implementing policy decision, which is good for the nation. We also argued that a broader government coalition would weaken the bargaining power of each individual party, reducing to a minimum decisions that cater narrow interests and lack broad support. But the question is what does the new, broader government coalition wish to accomplish before it finishes its term? We hope the addition of Yisrael Beytenu is not simply a tactic being used by Likud to improve its chances of political survival.Treading water is not an option.It is unfortunate that Liberman – at least according to sources within the Likud such as Tourism Minister Yariv Levin – has dropped demands for religion-andstate reforms that have in the past been championed by Yisrael Beytenu. Apparently, he was asked to do this out of deference to Shas and United Torah Judaism, the two haredi parties in the coalition.Israel will also likely pay a price diplomatically for Netanyahu’s decision to choose Liberman over Herzog.Just this week, Egypt’s President Abdel Fatah al-Sisi, apparently under the impression Herzog was on his way to becoming foreign minister, publicly expressed optimism regarding the prospects for achieving peace with the Palestinians.But now, with one of the most right-wing governments in its history, Israel will likely be portrayed in international forums as the intransigent party in the conflict. Already, Palestinians are claiming that the Liberman’s appointment as defense minister is proof that Israel is not serious about negotiating a peace deal. The Obama administration will probably be less inclined to oppose or veto Palestinian-sponsored efforts at the UN Security Council and will be more willing to support the French initiative that could impose on Israel preconditions for talks.It is therefore imperative that the newly expanded coalition launch a diplomatic initiative of its own. The public expects – and deserves – more than just an extension of the coalition’s life expectancy.