More and more nations are unwilling to lend a hand to subverting international institutions in order to vilify Israel. 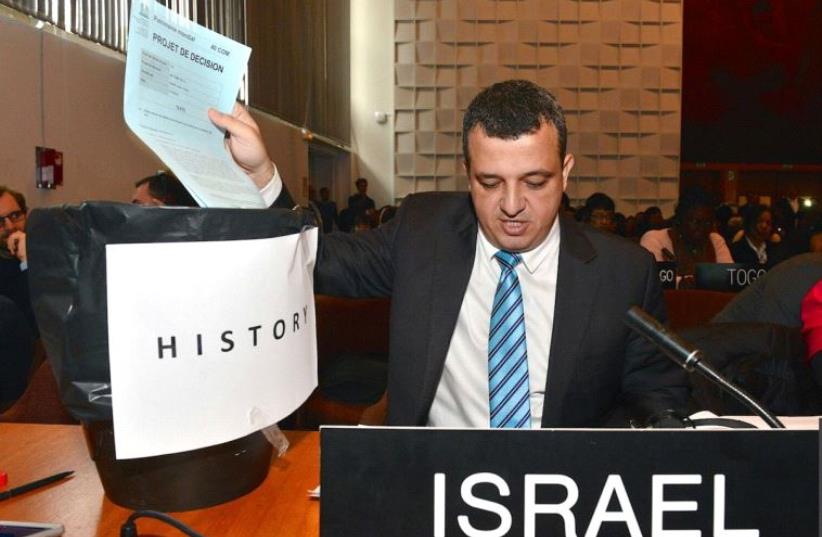 Israel's envoy to UNESCO Carmel Shama-Hacohen puts the resolution on Jerusalem in the trashbin of history
(photo credit: EREZ LICHTFELD / PERMANENT MISSION OF ISRAEL TO THE UN)
Advertisement
In yet another outrageous decision that comes as no surprise to those familiar with the workings of the United Nations, UNESCO the international body’s premier cultural agency passed a resolution on Tuesday indicating that Israel has no legal or historical rights anywhere in Jerusalem.Luminaries of ethical behavior and historical accuracy such as Egypt, Lebanon, Qatar and Sudan exploited the automatic anti-Israel majority in the 58-member body to pass the resolution on “Occupied Palestine.”Adding insult to injury, the resolution was passed as millions of Israelis celebrated the 69th anniversary of the Jewish state’s independence. But, of course, that was the whole point – what better way to hurt Israel than to pass a resolution denying the Jewish state’s claims to its capital city on the day that commemorates the Jewish people’s return to political sovereignty after nearly two millennia of exile from its historical homeland and its spiritual center? The Jews’ right to rule in Jerusalem is undeniable. Never before have the religious freedoms of all religions been so meticulously guarded in Jerusalem. Muslim, Christians and Jews, as well as other religions, have access to the holy sites in this holy city. Jordan denied Jews access during the time it controlled the Old City. Under the British Mandate, Muslim extremists intimidated Jews and effectively prevented them from praying freely. The situation was similar during the Ottoman rule. But under Israeli rule, law and order are maintained and religious rights for all are respected.Jerusalem’s centrality in Judaism is undeniable. The city is mentioned more than 800 times in the Bible. Jews throughout the ages turn toward Jerusalem when they pray. Hope of returning to a rebuilt Jerusalem is an integral part of Jewish liturgy and practice. Jerusalem’s rise and fall followed the waxing and waning of the Jews’ connection with the Land of Israel. The city’s destruction marked the demise of Jewish sovereignty and the remarkable resurgence of the holy city, today, is a reflection of the Jews’ renewed political, cultural and social vibrancy.Russian Jews that sat in Soviet gulags were kept alive by the hope of one day seeing Jerusalem in all its splendor; Ethiopian Jews trekked hundreds of kilometers by foot to unite with Jerusalem. No other people can claim such powerful ties.Those who despise and envy Israel for its successes chose Independence Day and the 50th anniversary of the unification of Jerusalem to continue the delegitimization of the Jewish state. But this campaign has increasingly come to be recognized for what it is: a surreal and risible hatefest motivated by a powerful anti-Israel bias, as well as antisemitism.Countries that in the past automatically supported such anti-Israel resolutions have come around to acknowledging the irrationality of singling out Israel for castigation. If a year ago 33 countries supported an even more outrageous version of a resolution denying the Jewish connection to Jerusalem, six months ago it dropped to 24 and is now down to 22 countries.Ten countries voted against the resolution: the US, UK, Italy, the Netherlands, Lithuania, Greece, Paraguay, Ukraine, Togo and Germany. Support for Israel has nearly doubled and spread to Africa, South America and Eastern Europe, noted Carmel Shama-Hacohen, Israel’s envoy to UNESCO. The days when the US was Israel’s lone ally in the UN are over.More and more nations are unwilling to lend a hand to subverting international institutions in order to vilify Israel. They have realized that aiding and abetting historical revisionism, which has as its goal the demonization of Israel, does nothing to further the Palestinian cause. The strength of the Palestinian national movement is not built up by spreading lies about Israel.Palestinian Authority President Mahmoud Abbas, one of the figures leading the campaign to delegitimize Israel is slated to meet Wednesday with US President Donald Trump. The US president has a unique opportunity now, while the absurd UNESCO vote is still fresh, to point out to Abbas the futility of disseminating lies about Israel and the Jews. Abbas would better serve his people by providing direction and vision, not engaging in deceit that is ultimately self-defeating for a people that should base its own national ethos on positive values and goals, not lies and fabrications.