Daily interactions are not only inevitable, but potentially rewarding and mutually beneficial. If Palestinians and Israelis can do business together and interact on a daily basis. 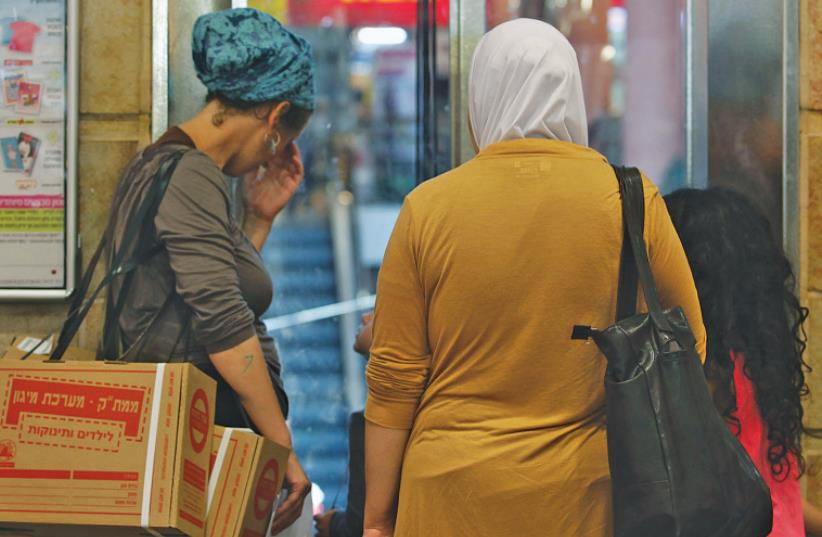 JEWISH AND ARAB Israelis wait outside a distribution center to trade in their First Gulf Warera protective gas-mask kits for newer models in 2012.
(photo credit: MARC ISRAEL SELLEM/THE JERUSALEM POST)
Advertisement
The bottom-up approach to solving the Israeli-Palestinian conflict posits that peace begins with people.Only when both Israelis and Palestinians accept the notion that their societies are inexorably tied to one another will it be possible to realize peace.The two societies must reconcile themselves to the fact that they share the same geographic area; that their economies are intertwined in deep and intricate ways; that the environmental negligence of one people has ramifications for the other; and that Israelis and Palestinians must learn to communicate with one another for the betterment of both peoples.In short, Israelis and Palestinians need to internalize the idea that relations cannot be reduced to a zero-sum game in which one side must lose and the other must win.Rather, the growth and prosperity of one side is ultimately beneficial to the other.A new mall launched this week in Gush Etzion, which caters to both Israelis and Palestinians living in the area, exemplifies the potential power of the bottom- up approach to bringing about positive change. The three-story, 5,000-meter structure has 15 shops, including a FOX clothing outlet and home goods retailer.During a small ribbon-cutting ceremony on the top floor that was attended mostly by politicians from the Right, Muslim women wearing hijabs and traditional dress could be seen shopping alongside religious Jewish women in skirts, and scarves tied over their hair. Here was coexistence in action.Another mall planned for next year located near Ramallah takes the coexistence concept one step further. Israeli supermarket mogul Rami Levy is building the first Israeli- Palestinian mall in which both Israeli and Palestinian shop owners will rent space. A number of Palestinian food providers have already taken space in the new mall, as have Israelis.The idea for the mall, Levy said, comes from his existing shopping centers and supermarkets in the West Bank, which are points of friendly interaction between Jews and Arabs looking for jobs and the cheapest prices.Daily interactions are not only inevitable, but potentially rewarding and mutually beneficial. If Palestinians and Israelis can do business together and interact on a daily basis in other constructive ways, maybe they will be able to cooperate politically and diplomatically as well.To a certain extent, former Palestinian prime minister Salam Fayyad’s failed plan to reform the Palestinian Authority – which was articulated in a paper entitled “Palestine: Ending the Occupation, Establishing the State” – was built on the premise that daily cooperation with Israel was essential for the creation of a de facto Palestinian state.In order to achieve peace with the Palestinians, however, on-the-ground efforts to improve cooperation in the fields of business and environmental issues must be accompanied with diplomatic measures. The bottom-up approach must be complemented by a top-down plan – malls and joint ventures must be backed by political leaders and diplomatic arrangements.Israeli and Palestinian prime ministers, presidents and ministers must proactively advocate for peace. They must extol the importance of reconciliation and convince their respective peoples that peace is an imperative. They must be willing to lead substantive diplomatic initiatives for settling long-standing points of conflict. Both sides need to show a willingness to compromise on Jerusalem, the Palestinian refugee problem, settlements, borders, and military cooperation, and show a willingness to make painful concessions.Consecutive Israeli governments have demonstrated this readiness. Ariel Sharon pulled out of Gaza, Ehud Olmert offered 98 percent of the West Bank, and Benjamin Netanyahu froze settlement construction. Despite these efforts, all were met by Palestinian intransigence.Mall openings are helpful, but real peace needs to see a combination of a top-down and bottom-up approach.Diplomatic gestures will be meaningless if they are not accompanied by substantive business and social ties between Israelis and Palestinians. At the same time, improved economic ties will not solve the conflict until political leaders prepare their people for peace, and negotiate diplomatic and military arrangements that provide a framework and a direction forward.One won’t work without the other.