The popularity of US Senator Bernie Sanders signals an ominous change in American public opinion. 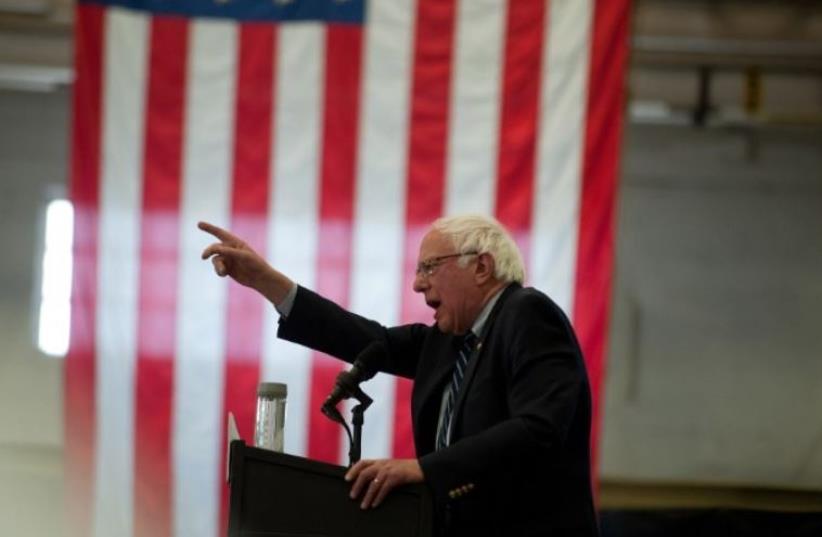 Democratic presidential candidate Bernie Sanders speaks to supporters in Pittsburgh
(photo credit: AFP PHOTO)
Advertisement
Israel has been a bipartisan issue in US politics, at least since Democratic US president Harry Truman recognized the world’s only Jewish state. Support for Israel was instinctual regardless of one’s party affiliation because it was synonymous with American values.But the rise in the popularity of US Senator Bernie Sanders signals an ominous change.In the run-up to the 2016 elections, Sanders, the first Jewish presidential candidate to win a major party’s nominating contest, surrounded himself with people openly antagonistic to Israel. He chose Professor Cornel West and James Zogby as members of the 15-member Democratic platform committee. He tapped Simone Zimmerman, a vocal critic of Israeli policies, as director for Jewish outreach before firing her in the wake of outcry from a number of Jewish leaders.Sanders’ position on Zionism is generally favorable. But he has on occasion revealed his own bias against Israel and sympathy for Palestinian leadership.In a 2016 interview with the New York Daily News, Sanders said he thought the number of Palestinian civilians killed by Israel in the 2014 Gaza conflict was 10,000. To his credit, when Sanders was confronted with the real number, he eventually accepted it.Sanders is making headlines again after claiming in an interview Friday with the left-wing website The Intercept that the US is “complicit” in Israel’s occupation of the West Bank and Gaza and that, under certain circumstances, he would consider supporting reduction in the yearly $3.1 billion military aid provided by the US to Israel.Sanders was careful to nuance his comments by noting, “It’s not to say that Israel is the only party at fault.” But it is clear that his statements and appointment choices reflect a sentiment held by a growing number of progressive Democrats.Democrats’ support for Israel has traditionally been lower than that of Republicans. But the gap has grown. A Pew Research Center survey conducted at the beginning of January found that the difference between the two parties’ support for Israel is at an all-time high since 1978, when Pew starting checking.Pew asked the following question: In the dispute between Israel and the Palestinians, with whom do you sympathize more? Seventy-four percent of Republicans said they sympathized more with Israel, compared to 33% of Democrats.About the same percentage of Democrats (31%) said they sympathized more with the Palestinians, while just 17% of Republicans said they did.Similar levels of Democratic support for Israel vis-a-vis the Palestinians were registered in the early 1990s and in mid-2000. And Republican support for Palestinians has not changed much. What has changed is the level of Democratic support for Palestinians, which is at a new high, at least since 2001. Among liberal Democrats, support for Palestinians surpasses support for Israel, according to a 2016 Pew survey.This needs to be of concern not just for Israelis but also for Americans who cherish democratic values and their constitutional rights.If your judgment is flawed on the Israeli-Palestinian conflict it is bound to be flawed on domestic issues as well.Progressives like former Vermont Gov. Howard Dean – who has declared the need to be “even-handed” in the Israeli-Palestinian conflict – are also the ones denying ideologues like Ann Coulter the right to speak at venues such as University of California Berkeley, even though this right is protected by the First Amendment.Sanders revealed his loose grasp of American values when he attempted to disqualify a Trump administration appointee for avowing the orthodox Protestant position that Muslims, like other non-Christians, are not eligible for salvation. Article VI of the US Constitution forbids religious tests for federal appointments. Would Sanders demand the same religious test for Muslims? It it not clear if the shift within the progressive wing of the Democratic Party away from support for Israel and toward greater support for the Palestinians is something Israel can change or if it is part of a larger abandonment of traditional American values.Either way, the breakdown of bipartisan support for Israel has far-reaching implications.