Netanyahu’s basic argument – that the Palestinian demand to uproot Jewish settlements reveals bigotry and intolerance – has been made by this paper in the past. 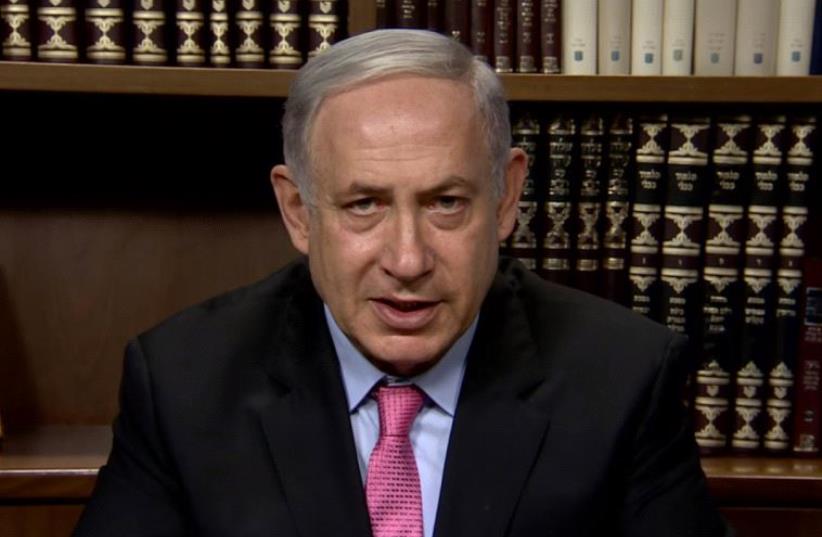 PM Netanyahu: Dear Arab citizens of Israel--take part in our society in droves
(photo credit: screenshot)
Advertisement
A video message from Prime Minister Benjamin Netanyahu has elicited outrage from Washington. Netanyahu accused the international community – Washington included – of promoting ethnic cleansing by backing the Palestinian demand that all Jewish settlements be dismantled in areas that become part of a future Palestinian state.While Israel has nearly two million Arabs living inside its borders, the Palestinian leadership “actually demands a Palestinian state with one precondition: no Jews,” Netanyahu said in the video released by his office.“There is a phrase for that, it’s called ethnic cleansing,” the prime minister said. He went on to say that the international community’s decision to support the Palestinians’ demand was “even more outrageous” than the demand itself.Netanyahu’s basic argument – that the Palestinian demand to uproot Jewish settlements reveals bigotry and intolerance – has been made by this paper in the past. If the peace process is genuine, a future Palestinian state should be tolerant enough to accommodate and protect a Jewish minority in its midst. That the Palestinian political leadership is unable to contemplate such an arrangement is a worrying sign that any purported peace process would be empty of meaning. Only when settlements cease to be perceived as the key obstacle to peace, will there be hope of a true reconciliation between Israelis and Palestinians.However, Netanyahu’s choice of words was unfortunate. The US and other pro-Zionist supporters of a two-state solution to the Israeli-Palestinian conflict are not advocates of ethnic cleansing. They view the dismantling of Jewish communities as a means of reducing tension between the sides. These settlements should be removed not because Jews’ unalterable ethnic affiliation disqualifies them to live in this geographic area, rather because the legacy of the conflict makes it impossible for the two peoples to live together right now. It is, therefore, better to separate the two peoples in the short term.The US position – shared by a large swath of the international community – should not be confused with support for ethnic cleansing of Jews. The idea that Israelis and Palestinians cannot live with one another and therefore must be separated underlies the reasoning of the two-state solution. Zionist political parties that support such a solution – such as Labor and Meretz, and even Netanyahu according to his famous Bar-Ilan speech in 2009 – believe that peace is worth the heavy price of uprooting Jewish settlements. They also believe that maintaining control over Judea and Samaria with its large Palestinian population for the sake of the settlements undermines Israel’s standing as a democracy.Indeed, it was Menachem Begin, Israel’s first prime minister from the Right, who set the precedent for uprooting settlements and transferring Jewish populations as a precondition for peace with our Arab neighbors. The 1979 Israel-Egypt Peace Treaty was made possible after Begin agreed to dismantle Jewish settlements built in Sinai.Begin was not engaging in ethnic cleansing when he agreed to relinquish control over the Sinai Peninsula to Egypt, nor was then-prime minister Ariel Sharon when he dismantled the Jewish communities of the Gaza Strip and northern Samaria in the summer of 2005. These pullouts were the result of a realization that Egyptians and Israelis and Palestinians and Israelis are unable to live together in peace on the same piece of land.In the case of the Palestinians, the pullouts only encouraged more violence and terrorism.Whether the dismantling of settlements is ultimately needed to obtain a peace deal with the Palestinians remains to be seen. First and foremost, Palestinians need to stop their incitement against Israelis and to begin a process of reconciliation that makes it possible for a future Palestinian state to exist side-by-side with the Jewish state. Once that happens, the possible existence of a Jewish minority within that state can be contemplated.At the same time, the US - alongside the Israeli political parties on the Left that support a two-state solution - should not be accused of advocating ethnic cleansing. Making such a charge is unfair and unhelpful diplomacy, particularly when the accused party is Israel’s most important and strongest ally.