Regardless of differences on certain issues, a boycott of Israel is extremism which must be rejected. 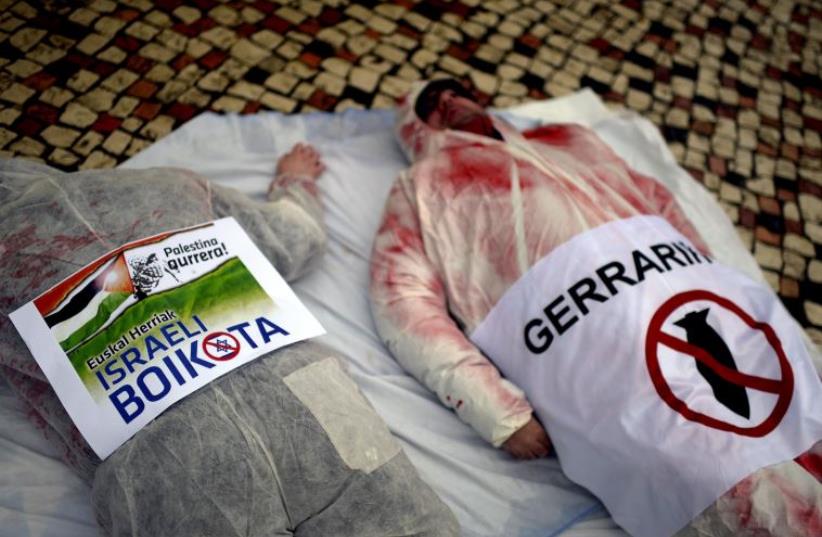 Demonstrators lie with posters in Basque which read, "Up With Palestinians. Boycott Israel" (L) and "No To War" as they wear suits covered in fake blood during a pro-Palestinian protest at the Plaza Moyua in Bilbao
(photo credit: REUTERS)
Advertisement
There are many issues one can debate in the Jewish community, but endorsing a boycott of Israel is completely off limits. Why, then, does the president of Hebrew Union College sit in leadership positions with people who endorse BDS and meet with Hamas? Founded in 1940 by the sons of John D. Rockefeller, the Rockefeller Brothers Fund claims to be a “private, family foundation helping to advance social change that contributes to a more just, sustainable and peaceful world.” This organization, that wants “peace,” gave $140,000 in June to the Jewish Voice for Peace, an organization that openly endorses BDS and supports a Palestinian “right of return.” It calls Palestinian stabbings and shootings “Palestinian popular resistance” and shared a statement on its Facebook account that praises “a new generation of Palestinians… rising up en masse against Israel’s brutal, decades-old regime of occupation, settler colonialism and apartheid.” Melissa Berman, the founding president and CEO of Rockefeller Philanthropy Advisors, Inc., “an innovative nonprofit philanthropy service launched by the Rockefeller family in 2002,” sits on the International Advisory Council of the New Israel Fund, which openly boycotts Israel and supports labeling of products.Kathleen Peratis, an advisory board member of the New Israel Fund and a partner at the New York law firm of Outten & Golden LLP, supports BDS – and is a leader of the New Israel Fund, also sitting on its International Advisory Council. Peratis wrote an op-ed, “If you want two states, support BDS.” Describing BDS as a “non-violent tool,” she writes“[N]ot buying Sodastream or Gush Etzion wine is a start.” Peratis has met with Hamas members. As The Washington Post describes, she recounts her experience with Hamas “as a fun-filled joy fest spent with friends.” She quotes one smuggler as saying: ”Please tell your friends that Hamas people are ordinary people. We are not barbarians.”These idiots are joined on the International Advisory Council of NIF by the president of Hebrew Union College, Rabbi Aaron Panken, the largest Reform college in the United States, and the senior rabbi of Temple Israel of White Plains, one of America’s preeminent Conservative synagogues. Regardless of differences on certain issues, a boycott of Israel is extremism which must be rejected.There are many issues one can debate in the Jewish community, but endorsing a boycott of Israel is completely out of bounds.Leaders of Hebrew Union College and Temple Israel of White Plains must stand with Israel, and demand that their leaders resign from the board of an organization which boycotts Israel and endorses labeling.

George Birnbaum is an international political consultant, who formerly served as chief of staff for Prime Minister Benjamin Netanyahu.Hank Sheinkopf, CEO of Sheinkopf Communications, is a leading political strategist who has worked on campaigns in four continents. His clients have included former president Bill Clinton.Ronn Torossian is a New York-based public relations executive and author of For Immediate Release.