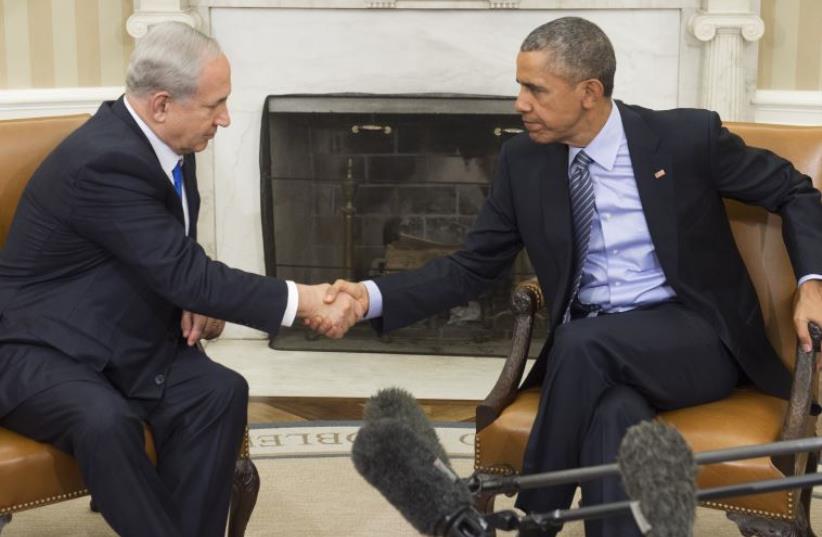 Benjamin Netanyahu shaking hands with Barack Obama at a meeting at the White House on November 9, 2015
(photo credit: SAUL LOEB / AFP)
Advertisement
Benjamin Netanyahu didn’t leave the White House Monday with everything he wanted, but he did get one very big gift he’s always craved, and the promise of another.The White House announced it was throwing in the towel on efforts to broker a peace deal between Israel and the Palestinians for the remaining 14 months of Barack Obama’s term.Obama made Middle East peace a priority on his second day in office, which set him on a collision course with the conservative prime minister, who has shown little interest and a lot of excuses to stay away from the negotiating table.Former president Shimon Peres said recently that when it comes to peacemaking Netanyahu is all talk and no action.In an Oval Office photo op before Monday’s private meeting, Netanyahu went through the motions of reiterating his commitment to a two-state solution that he only embraced under considerable pressure from Washington in 2009. He offered no evidence of his sincerity, which much of the world doubts, but he didn’t need to. He won the battle; it was now a moot issue, at least until there is a new president.The White House response to Netanyahu’s talk about wanting peace was “show me.” Press secretary Josh Earnest said Netanyahu’s words were “encouraging” but the president is looking for “action.”Netanyahu’s mantra is “security is the basis for peace,” meaning his definition of security, not that of Israel’s defense and intelligence professionals. He seems to prefer an extended status quo, with Israel holding on to most of the West Bank and settlement expansion continuing, with just a tolerably low enough level of violence to permit him to declare the time for peace isn’t right.It still rankles administration officials that on the eve of his election last March Netanyahu promised supporters there would be no Palestinian state on his watch. His effort to walk that back didn’t impress Obama or just about anybody else.Netanyahu’s aides said the prime minister felt the meeting – the 16th between the two leaders since 2009 – was the best ever. Each man looked like he’d rather be somewhere else.Netanyahu didn’t get everything he came for. He was hoping to wrap up a new 10-year strategic agreement. He is asking for a $50 billion aid package, including the best the Pentagon has. The current level is $3.1b. and Obama has in mind something closer to $4b. a year, not counting extras like the Iron Dome, Arrow and David’s Sling anti-missile programs.The administration may be holding off on some final decisions to see what Netanyahu does after his visit to implement some promised confidence building measures to calm the violence. And whether there will be another burst of settlement construction, which the administration considers “counterproductive” and a message to Palestinians that they can forget about statehood.Obama strongly condemned Palestinians for the current wave of “violence against innocent Israeli citizens” and repeated his “strong” support for Israel’s right... [and] obligation to defend itself.”Senior aides briefing reporters before the Oval Office meeting said neither the Israelis nor the Palestinians took “sufficient steps” toward peace over the past seven years.The price tag on the aid package is a potential problem.US Ambassador to Israel Dan Shapiro said, “We have to take into account our budget reality as well.”The administration is facing intense pressure from the Republican-controlled Congress, going into an election year, to cut spending, particularly in domestic programs important to Democrats.Netanyahu may be Obama’s most frequent foreign visitor, but is not his favorite. There was little warmth in their photo op. The prime minister appeared uncharacteristically subdued, without any of his usual swagger.He repeatedly expressed “gratitude” to “you” as he looked directly at Obama, “for sustaining and strengthening the tremendous friendship and alliance” between the two countries.Netanyahu’s efforts to make shalom with Obama were cast into doubt before he even arrived, when he appointed as his spokesman Ran Baratz, who has – outrageously – called the president of the United States an anti-Semite and said the secretary of state has the intellect of a 12-year-old.Even several members of Netanyahu’s own cabinet have called on him to withdraw the appointment, but he has so far refused, saying he will deal with it when he returns home.Hours after the White House meeting he was honored by some of Obama’s fiercest critics, the neocon American Enterprise Institute. The invitation no doubt was arranged by his ambassador, Ron Dermer, the former GOP operative who also set up Netanyahu’s congressional speech last March behind the White House’s back.As an afterthought Dermer set up an appearance before the liberal Center for American Progress to appear “fair and balanced” and to try to repair some of the enormous damage the two have done to Democratic and liberal support for Israel.The peace process is dead for the rest of the Obama administration and that could continue if the next president is a Republican. None of the GOP candidates for president has shown any interest in pushing the peace process. Just the opposite. Most sound more hawkish than Netanyahu.Their party has been trying for years to make Israel a partisan wedge issue, with the enthusiastic cooperation of Netanyahu and Dermer. The small Republican Jewish base, particularly the big-money people like Sheldon Adelson, is conservative and largely opposed to Palestinian statehood. Moreover, the GOP’s much larger evangelical wing, eagerly awaiting the fulfillment of apocalyptic Bible prophecies that predict Israel’s fiery demise as a Jewish state, is also to the right of Netanyahu.But the prime minister won’t be returning home empty handed. He will have his hall pass to get out of the peace talks and a promise of billions in new aid, which he will then tout as a confession that Obama’s Iran deal was indeed the big threat to Israel that Netanyahu and the Republicans said it was. Not a bad haul for poking your fingers in the eye of the American president.