Voices on both sides are increasingly saying it may be time to end US aid to Israel. 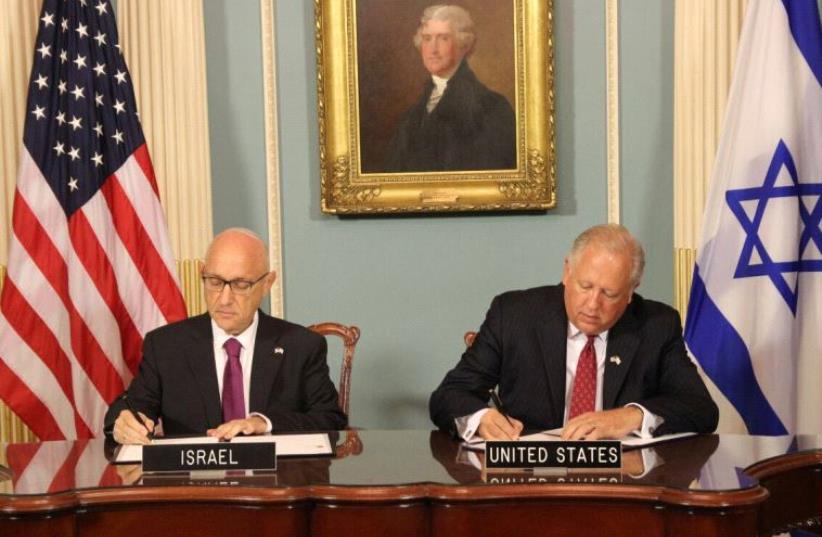 Yaakov Nagel and Thomas A. Shannon sign the 10-year defense agreement
(photo credit: ISRAELI EMBASSY IN WASHINGTON)
Advertisement
The signing of a 10-year, $38 billion military assistance package for Israel gives the Jewish state more US aid than all other countries combined.Yet there is a chorus of complaints from Israel and some of its American friends that it is not enough.Two former defense ministers said any other Israeli prime minister could have gotten a better deal but Prime Minister Benjamin Netanyahu’s antagonistic relationship with President Barack Obama reduced the package by as much as $10b.Netanyahu disingenuously accused his critics of “ingratitude to our greatest and best friend, the United States.” He’d reportedly sought $5b. annually – under the agreement expiring next year Israel gets $3.1b. a year – and threatened to wait for the next president if Obama didn’t go along.Republican and Democratic supporters in Washington told Netanyahu to take the money and run because budgetary restraints that kick in next year worked against him.Under the new agreement, some $750 million in annual aid that went to support Israel’s domestic defense industry will be phased out and spent in the United States. Another provision renews earlier agreements dating back to the Reagan administration that once the two governments agreed on an aid level neither would go to its friends in Congress to change it.What does the US get for its $3.8b. a year beyond helping defend a good friend and ally? Netanyahu will take the money and “immediately spit in the US administration’s face,” wrote Raviv Drucker in Haaretz. “Netanyahu has proven that the billions create no dependence” because he believes he could still get the funding from Congress and ignore the White House.Netanyahu seems to consider American aid as an entitlement program. He feels free to oppose US policy with impunity, reject presidential calls for a settlement freeze and derail peace negotiations by putting all the blame on the Palestinians for the lack of progress while continuing to take actions clearly intended to create new roadblocks to negotiations.But it’s a winning strategy, at least in the short term.President Obama, like his predecessors, quit trying to make peace but kept signing bigger and bigger aid bills for Israel and voting at the United Nations and in international agencies the way Netanyahu wanted.So far. There are rumors that could change between the November 8 election and the January 20 inauguration.In President Obama’s speech at the United Nations Tuesday he called on Palestinians to “reject incitement and recognize the legitimacy of Israel” and for Israel to recognize “it cannot permanently occupy and settle Palestinian land.”Permanent occupation, notwithstanding Netanyahu’s two-state rhetoric, seems to be his long-term plan.What can Washington do to change that? Does $38b. give the United States leverage it isn’t using? That thought worries a growing number of Israel’s friends on the Right. They argue that American aid comes with too many strings that limit Israeli freedom of action.Critics on the Left say that the aid bonanza fails to produce the influence and cooperation America deserves and needs.Voices on both sides are increasingly saying it may be time to end US aid to Israel. They should be taken seriously.Moshe Arens, the former defense minister and ambassador to Washington, has said Israel may “love” getting US aid but “it’s not essential to Israel’s survival.”Economics Minister Naftali Bennett, leader of the Bayit Yehudi Party and a strident opponent of Palestinian statehood, feels “we need to free ourselves” from US aid.Noah Pollak, executive director of the neocon Emergency Committee for Israel, told Eli Lake of the Daily Beast that US aid gives “presidents with bad ideas” too much leverage over Israel.I’ll bet Obama wishes that were so.Critics on both sides agree Israel’s strong economy can absorb the loss of much of the US aid (while keeping joint critical programs like development of anti-missile defense systems).“The appearance of Israel, a high-tech mecca, demanding the largest share of US foreign aid – by far – is disturbing and will ultimately undermine Israel’s image in this country. So will the fact that it demands this aid even as Israeli policy so often conflicts with US interests and its leaders so often spit in the face of administrations in Washington,” said a longtime Washington correspondent for Jewish newspapers.Aid is fungible, which means those billions of American dollars free up billions of shekels for other purposes, particularly deepening and broadening the settler footprint in the West Bank in defiance of US policy.Israel has been called our most uncooperative ally. It is hard to imagine any other country receiving billions of dollars in aid and being so defiant. But no other country has a domestic political base that sees that aid as a measure of the US-Israel relationship.There is a major industry dedicated to raising the billions in aid, the Israel lobby. Politicians say they support high levels for all the noble reasons, rarely questioning what the US gets in return as long as they enjoy the dividends it pays in campaign contributions and votes. Any competition, from the Jewish Left and peace camp or from the pro-Arab camp, is ineffectual.These politicians not only vote for aid to demonstrate their support but compete with each other to see who can come up with the most sycophantic resolutions, speeches, letters and amendments extolling the lucrative relationship, hoping to open still more pro-Israel checkbooks.It’s about the money. Policy is secondary.With this 10-year Memorandum of Understanding finished and a new administration coming in, 2017 would be a good time for the US to thoroughly examine the relationship (the word “reassess” has a bad history) to determine how it can better serve American interests.