We honor, we prevail 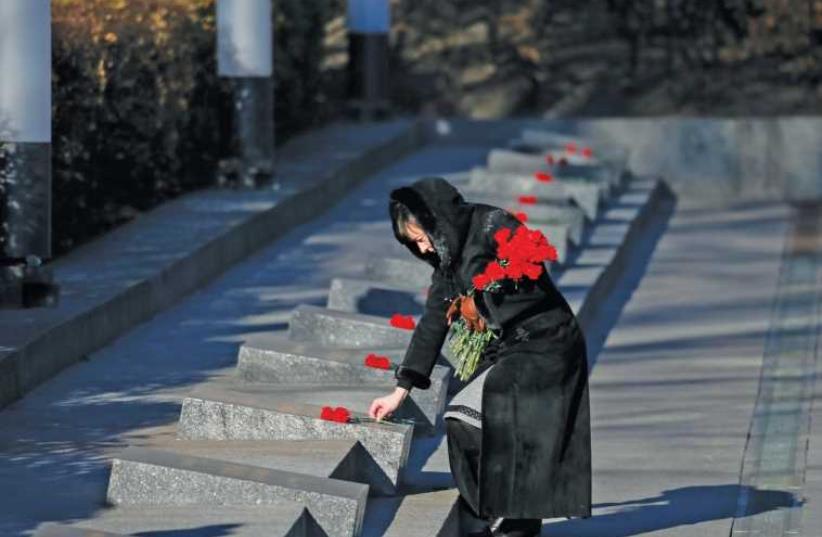 A WOMAN lays flowers during a wreath laying ceremony at the Unknown Soldier’s Tomb in Kiev
(photo credit: REUTERS)
Advertisement
Since last year the official symbol of Victory Day in Ukraine has been the red poppy, an international symbol honoring all victims of war. This year, in the Ukrainian cultural center in Israel volunteers made “Remembrance Poppies” which were handed to veterans and all guests of the concert “Songs of Peace” organized by the Embassy of Ukraine in the State of Israel in cooperation with the Tel Aviv Municipality and Tel Aviv-Jaffa Old Railway Station (HaTachana). The concert was dedicated to the 70th anniversary of the Allies’ WWII victory.V Day has been among the biggest holidays on the Ukrainian calendar ever since 1965, when it was established.In the Western world V Day has been commemorated on May 8 because that’s when the German Nazi leadership declared its capitulation. Yet Soviet dictator Joseph Stalin declared Victory Day to be on May 9 because it was 0:43 a.m. Moscow time when the act was signed (22:43 in Berlin).This year, the Ukrainian Parliament voted to eliminate the official status of the term “Great Patriotic War,” replacing it with “the Second World War.”
See the latest opinion pieces on our page
The same bill established May 8 as the Day of Memory and Reconciliation.This symbolic move was intended as a break from the past and as indication of Ukraine’s European integration.“Attempts to rewrite history, to appropriate the victory in the Second World War and appropriate this sacred and historic struggle over Nazism, should be suppressed. Ukraine is a winner country in the Second World War.Ukraine is the founder of the United Nations”, urged Ukrainian Prime Minister Arseniy Yatsenyuk.During WWII, Ukraine lost more people than the Great Britain, Canada, Poland, the USA and France combined.The total Ukrainian losses during the war are an estimated 8.1 million lives, and 1.4 million of them were Ukrainian Jews, i.e. nearly every one in four victims of the Holocaust in Europe. The number of Ukrainian victims can be compared to the modern population of Austria.During the WWII, the front passed the whole of the Ukrainian territory twice. Through Kharkiv, the second largest city in the country, the front passed by four times.The Ukrainians fought against Hitler and his allies in the Polish, Soviet, Canadian and French armies along with those of the American and Czechoslovakian and in the European, African and Asian theater of war and on the Pacific and Atlantic oceans. Ukrainian Alexei Berest was one of those who put the Soviet flag on the Reichstag in Berlin; Ukrainian Michael Strank was one of the American Marines who raised the American flag at Iwo Jima.But only one army formation fought under the Ukrainian flag during the war – the Ukrainian Insurgent Army (UPA).Ukrainians became cannon fodder for two dictators – Hitler and Stalin. Every third man in the Red Army was lost (compared to every 20th in the British army). The reason for this terrible situation was simple – Stalin did not count the losses because, as he said: “Women can give birth to more children!” The victims of this clash of two totalitarianisms were both the military and civilian Ukrainians; the area between the Carpathian and the Don River became known as the “Bloodlands.”That was the price Ukrainians paid for a lack of their own independent state.Ukrainian President Petro Poroshenko called on Ukrainians and the international community not to forget victims of totalitarianism.“Forgotten sins are unforgiven sins. And when it goes about the atrocities of totalitarianism, the question of remembering such sins or not becomes a choice – to be or not to be a human being,” Poroshenko said.“And God forbid us seeing a new Babi Yar [massacres of Jews by German forces in Kyiv in September 1941], Bykivnia, Katyn [mass executions of Polish nationals by the Soviet secret police, or the NKVD, in April and May 1940], and a new Holocaust or Holodomor [an artificial famine in Ukraine in 1932-1933]”, Poroshenko said.Ukrainian righteous who saved Jews during the occupation covered themselves with eternal glory, just as collaborators who participated in the genocide of the local population covered themselves with eternal shame.Today, an objective for the Ukrainian country is to honor each person, to demonstrate historical justice of what happened 70 years ago and to prevent repetition of such tragic and horrible events that occurred in the last century.We honor, we prevail.The author is Ukraine’s ambassador to Israel.