Israel's Ambassador to the UN describes his American counterpart as almost Israeli in her directness and her visit here as a huge opportunity for Jerusalem's diplomacy. 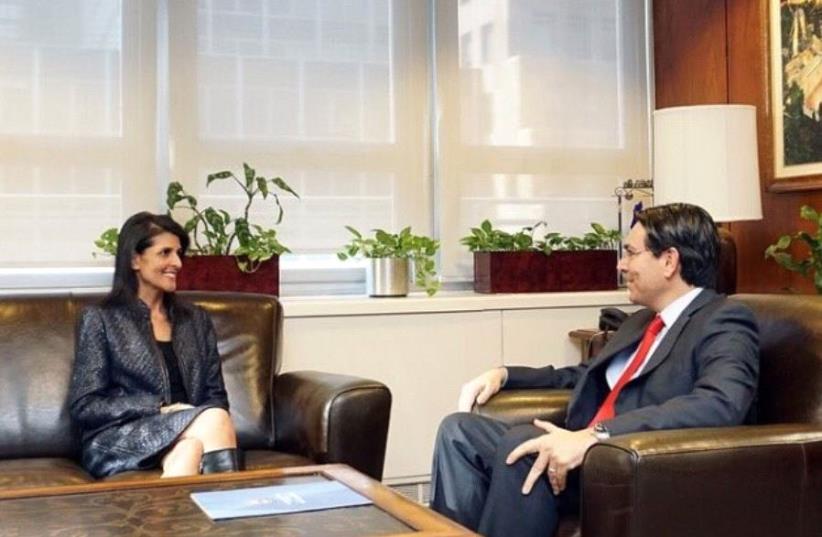 Israeli Ambassador to the UN Danny Danon (R) meets with US Ambassador to the UN Nikki Haley in New York
(photo credit: TWITTER)
Advertisement
The visit this week by the United States Ambassador to the United Nations, Nikki Haley, can mistakenly be viewed as trivial. After all, not a week goes by without Jerusalem hosting leaders from around the world. Nevertheless, Ambassador Haley’s visit is significant. By bringing moral clarity and a clear sense of justice to the UN, Ambassador Haley is serving as a model to leaders around the world, proving what can be accomplished when the simple truth serves as our guiding star. During my time at the UN, I have found the most discouraging aspect of diplomacy to be the gap between private words and public actions. On nearly a daily basis, ambassadors from around the world meet with me privately to discuss joint interests and possible areas of cooperation. Yet, when we appear together at public forums, these same diplomats make sure never to let on about our existing relationship. Worse, too often they go on to vote blindly against Israeli interests, and oftentimes their own, as they pander to the worst elements of the international community.Such behavior is almost understandably common among countries with which Israel does not have official diplomatic ties, but sadly it also exists among our allies. On a variety of issues, quiet support expressed for Israel behind closed doors often melts away amid explanations about regional interests or organizational commitments.As Israelis, we are used to speaking our minds and then acting accordingly, even when it may not be the most popular course of action. This is what makes Ambassador Haley’s approach so refreshing. In March, the UN’s Economic and Social Commission for Western Asia (ESCWA) issued an infuriating report declaring Israel an apartheid regime. Unfortunately, such biased and needless to say baseless, reports are a regular occurrence. In the past, meetings with our colleagues from allied countries on such matters would result in promises to work quietly behind the scenes using the UN system to eventually mitigate some of the damage inflicted on Israel by such lies. This time was different. Ambassador Haley and I met and it was clear to both of us that public outrage was more than warranted by these attempts to libel Israel. In addition to working with our partners from around the world to seek diplomatic remedies, we both issued public statements expressing our outrage. Within hours, the UN officialdom had distanced itself  from the report, and two days later, Rima Khalaf, the antisemitic head of ESCWA, quit. For years, we have warned our colleagues that the insistence by UN bodies to focus disproportionately on Israel is not only wrong, but it also diverts the international community’s limited time and resources from real crises around the globe. A prime example of such absurdness is the regular Security Council meetings on ‘the situation in the Middle East’ which have become regular Israel-bashing gatherings. When we raise this issue with our counterparts, we are met with nodding heads and promises to debate the matter further. Here again, Ambassador Haley showed the UN that it does not need to adhere to past failed models. During the month of April, when the US held the Security Council presidency, Ambassador Haley insisted that the debate focus on Iran, the real menace to peace and stability in the region.This straightforwardness of the American ambassador is not limited to areas concerning Israel. When it comes to the atrocities committed by the Assad regime in Syria, or the aggression by North Korea, Ambassador Haley insists on ending UN double-speak.As she tours Israel for the first time, Ambassador Haley is sure to be confronted with our trademark honesty head-on. The unequivocal support she has expressed for Israel will only be strengthened by her visit to our special country. I know this because I have witnessed this phenomenon after accompanying scores of ambassadors from around the world on their first encounters with the Holy Land.When we walk through the Old City of Jerusalem’s ancient alleys, Ambassador Haley will hear how steadfast and unwavering our connection to our birthright is, and how countless powers over the millennia failed to sever this bond. When we fly to Israel’s northern borders and observe firsthand the unique challenges Israel faces as the outpost of western democracy in the Middle East, her strong support for Israel to defend itself will only be reinforced. Finally, when we visit the world’s leading hi-tech companies and Ambassador Haley hears firsthand from entrepreneurs whose innovations are bettering the world, her appreciation for Israeli ingenuity will only be affirmed.I know that a first visit to Israel by anyone is a life-changing occasion. The visit by Ambassador Haley is sure to not only reaffirm her strong support for us at the UN but will hopefully serve as a model to the moral majority in the parliament of nations that the time has come for them to not only speak out in support of Israel but to finally act accordingly.The writer is Israel’s Ambassador to the United Nations.