What is preventing Kurdish independence?

If Kurds find a way to be a key US ally against Iran, the situation might change radically. 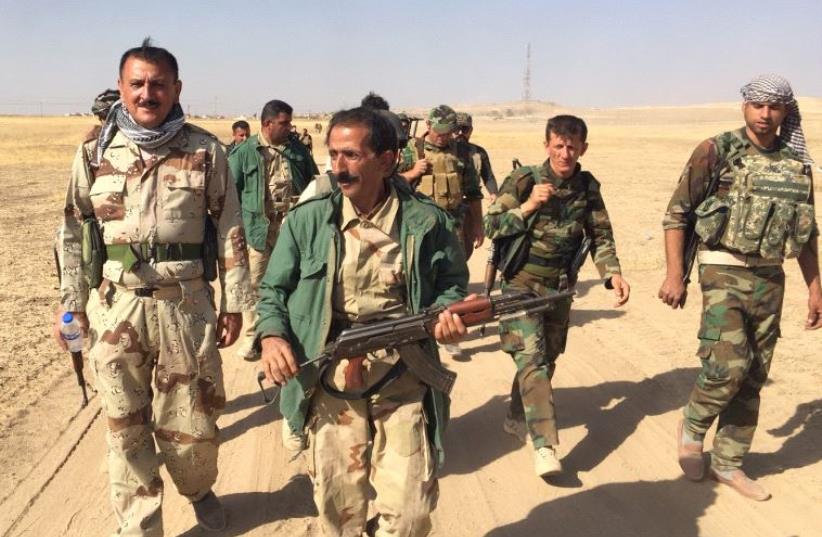 Kurdish peshmerga forces on the way to Mosul
(photo credit: SETH J. FRANTZMAN)
Advertisement
The Kurdish enclaves in both Syria and Iraq have never been so close to independence as they now are. Although the issue is a priority for all Kurdish parties and factions, the possibility of the emergence of a unified Kurdish state is quite low, as relations between Syrian and Iraqi Kurdish authorities are complicated.Iraqi Kurdistan nearly gained independence from Baghdad during the reign of Saddam Hussein. In the aftermath of Saddam’s ouster by the US, the Kurds, led by Masoud Barzani, became the only potent and organized force amid political and economic chaos in Iraq. The Erbil government has managed to establish workable state institutions, including an electoral system, institutions of local government and a military, the Peshmerga. The Kurds successfully carried out military operations against Islamic State in order to take control of oil-rich districts across Kirkuk, thus securing a solid economic basis. Moreover, the current constitution of Iraq, which guarantees a large degree of autonomy to Kurdistan, also considers the possibility of Kurdish independence.In Syria the progress of Kurdish independence has been far more difficult, as president Hafez Assad actively repressed any Kurdish civilian activity in the country. It should also be noted that the Kurdish parts of Syria in the north and south are divided and now under the control of the Turkish army and various pro-Turkish groups. Nevertheless, the same process that occurred in Iraq seems to have happened in Syria: successful countermeasures against ISIS as well as government troops, and the emergence of local government institutions. Syrian Kurdish forces went further by proclaiming the unification of three self-governing cantons under the name Rojava, which literally means “west,” in March 2016.Rojava contains not only ethnic Kurds but also other ethnic and religious minorities such as Assyrians, Arabs, Yazidis, Turkmens and so on. Such a well-organized policy toward minorities in Iraq and Syria allowed Kurds to chart a perfect political course: declaring nascent Kurdish states not nationalistic but multi-ethnic. In this way the Kurds contrasted their “tolerant” approach compared to other actors in the region. (In fact, however, there were several reported instances of ethnic cleansing in Kurdish enclaves against non-Kurds who fled the country during the civil war in Syria.) Members of the international anti- ISIS coalition, including Russia, actively supported Kurdish militia groups during the main battles in Iraq and Syria. In this regard, growing numbers of politicians in the West openly express their hope for Kurdish independence in the region. President Barzani has called on global leaders to acknowledge that the Sykes-Picot pact that led to the boundaries of the modern Middle East has failed, and urged them to broker a new deal paving the way for a Kurdish state.Several controversial statements have also been made by regional officials, and in particular by Qatar’s foreign minister Khalid al-Attiyah, whose official visit to Erbil in July 2016 caused a diplomatic scandal. Undoubtedly, Baghdad considered this act as support for Kurdish independence.The same controversial policy was enacted by the US and Russia. Both financially support the Kurdish role in Iraq and Syria, though Russia has no significant means to affect the larger question of Kurdish independence and despite close US-Kurdish ties, Turkey’s interference prevented Kurdish representatives from attending the Geneva talks over the Syria crisis in 2016. (Moreover, during Operation Euphrates Shield the US openly supported the Turkish offensive by demanding Syrian Kurds withdraw insurgent groups to the other side of the Euphrates.) Despite all the foreign policy controversies, four regional countries with significant Kurdish populations (Iran, Iraq, Syria and Turkey) show unprecedented solidarity when it comes to the question of Kurdish independence. Resistance to such independence is also widespread: even the Syrian opposition supports Bashar Assad’s position on this matter. All those resisting Kurdish independence justify it differently; Damascus and Tehran claim that an independent Kurdistan is a US-manufactured project designed to further split the Muslim world. Meanwhile, Turkey says it will only discuss the issue when the terrorist group the Kurdish Workers’ Party (PKK) is excluded from the debate.For now, the West seeks loyal allies in the Middle East to defeat ISIS, and a consolidation of regional allies against Iranian influence. Obviously, the future depends on what US Middle East policy under President-elect Donald Trump will look like. If Kurds find a way to be a key US ally against Iran, the situation might change radically.The author is a foreign affairs analyst and political commentator. Currently he is policy analyst at Wikistrat Inc. He is the author of Syria 1946-2012 and The Tunisian model of Democracy in the Arab World. He blogs
at www.fuadshahbaz.com.