What remains of the religious status quo?

Instead of Judaism being what unites Jews in Israel with Jews around the world, our religion has become the main source of conflict. 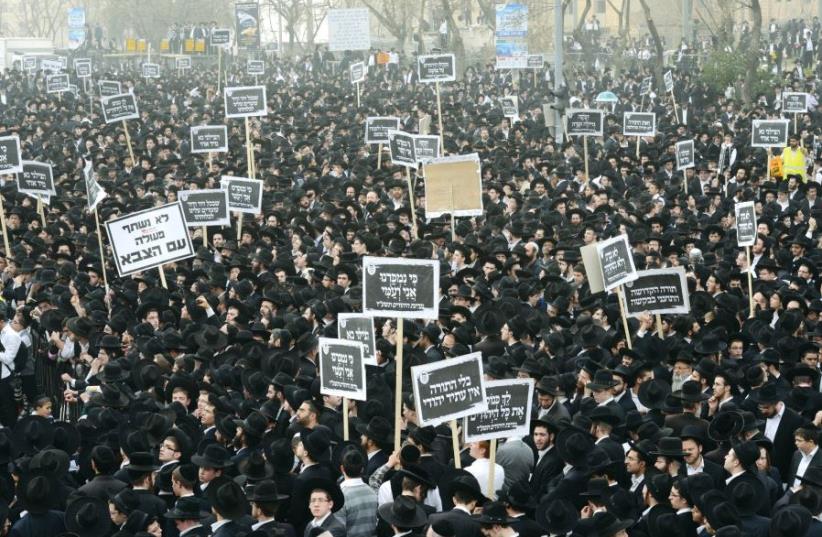 Ultra-orthodox Jews gather for a mass prayer in protest to the government’s army conscription laws in Jerusalem in 2014
(photo credit: KOBI GIDEON/GPO)
Advertisement
Relations between the Jewish religion and the State of Israel began to take form even before the state was founded. Since then, and over the past 70 years, it has been customary to speak about a “status quo” on matters of religion and state. Politicians, the courts, the media and the wider public regularly refer to this status quo. But it is mistaken to believe in a status quo that is a mere illusion.Beyond a symbolic framework and some legal arrangements, not much is left of the status quo. The result is chaotic arrangements of religion and state that endanger the Jewish character of the state and its relations with Jews around the world. In fact, a new survey by the Israel Democracy Institute found that more than one-third of religious Israelis and 80% of people who define themselves as not religious but traditional either support the separation of religion from state or reducing religious influence on life in Israel.What is the religious status quo? Seventy years ago, David Ben-Gurion sent a letter to the leaders of the ultra-Orthodox Agudat Yisrael movement. He promised that the state being established would have marriages and divorces conducted according to religious law; that Shabbat would the statutory day off for Jews; that all public kitchens would observe kashrut; and that the educational institutions of the various religious streams would be allowed autonomy.This letter, it must be said, was sent to Agudat Yisrael under pressure. The group threatened that it would not support the founding of the Jewish state if such an agreement was not made.When the state was founded, its leaders asked to establish a constitution. This project failed in part because of an inability to reach agreements on the relation of religion to the state. In lieu of the constitution, they reached an ad hoc agreement on the central issues, which became the status quo on matters of religion and state.These arrangements lasted a few years. However, relatively quickly, they began to erode to the point of irrelevance. Israeli society changed. The High Court of Justice took on the role of activist, taking a central role in creating arrangements on religion and state. The marketplace strengthened and pluralist organizations came on the scene. Collectively, these changes crashed the status quo and, in practical terms, emptied it of its content.The reality today on matters of religion and state is chaotic. The poll found that 70% of secular Israelis believe that in recent years life in the public sphere has tended to favor the ultra-Orthodox and modern Orthodox, while only 25% of the modern Orthodox and 22% of the ultra-Orthodox agree with this assessment. The gap between the law as it is written and the reality on several issues, including Shabbat, conversion and kashrut certification, is growing.In practice, anyone who has money or political power attempts to influence reality. The result is recurring crises among the sectors of Israeli society and between the State of Israel and the Jews of the Diaspora – conflicts that endanger the unanimity of society in Israel and the unity of the Jewish people.This situation also causes grave damage to the Jewish identity of the state. Instead of Judaism being what unites Jews in Israel with Jews around the world, our religion has become the main source of conflict. In addition, the erosion of the arrangements on religion and state has moved the situation to be one that more reflects political strengths than a principled and enlightened choice of Israeli Jews. This is a dangerous result for the “Jewishness” of the state.The only solution to this conflict is dialogue. Proper discussions among Israel’s religious sectors could lead to agreements. And these talks should include honest listening to the voices of Jews who live outside of Israel, who are likewise affected by arrangements of religion and state.To reach a political and societal agreement, there must be a majority among the secular, the traditional and the modern Orthodox who care about the Jewish character of the state and are willing to speak up. Only then will the politicians who represent them be willing to clash with the ultra-Orthodox and reach arrangements that better reflect the current Israeli society and the character of the Jewish people. Only if this task is completed, will Israel continue to be a Jewish and democratic state.Dr. Shuki Friedman is director of the Israel Democracy Institute’s Center for Religion, Nation and State.