While the EU continues to fund hate, let’s not kid about the peace process

Over the years PA President Mahmoud Abbas and his hate-preaching acolytes have received millions and millions in direct EU aid. 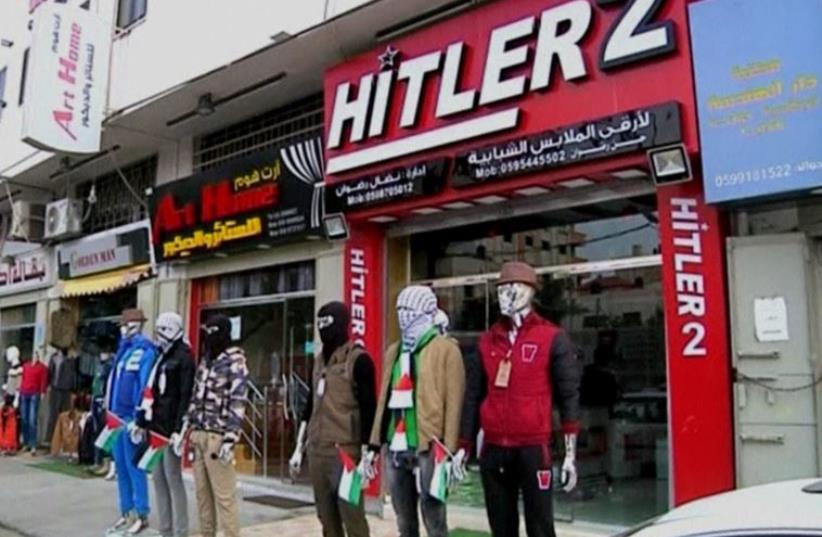 'Hitler 2' clothing store in Gaza
(photo credit: REUTERS)
Advertisement
What were you like as an eight-year- old? I can’t imagine most of you can remember, but I can be pretty sure it involved dolls or an action figure, a train or a shop set, coupled with seemingly unlimited amounts of energy in playing with friends and generally, as the saying goes “acting the maggot.” It was, as it should have been for most of us, a time of innocence, and while we might have played cowboys and Indians, we never thought of actually hurting anyone.There isn’t much that shocks me. I moved to Northern Ireland when I was sixteen, the IRA came to our house and held my mother and aunt at gunpoint to hijack our car, we knew families ripped apart by terrorism. I was involved in the Northern Ireland Peace Process for a number of years, and then my Jewish path led me to be an advocate for Israel. So similarly to Northern Ireland, when it comes to the sadistic and barbaric means that incited Palestinians find to kill, maim and wound innocent Israelis, I rarely flinch.This week, though, was different. Army cameras captured two figures on the Israeli side of the security fence at Migdal Oz, and when the IDF sent out a team to intercept the pair, they found two eight-year-old kids armed with knives.When questioned they admitted that they had been sent to kill Israelis.IDF spokesperson Peter Lerner, talking to the media, said, “When two eight-year-old children are sent on a mission to attack Israeli civilians it is clear that the hateful rhetoric that echoes within Palestinian society abuses the most vulnerable of minds.”I couldn’t agree more. Let us remember (as if we could ever forget) that so far in the year-long wave of terrorist attacks that has killed at least 34 Israelis and injured dozens, some of the terrorists carrying out stabbing attacks were as young as 11 or 13.But eight is a new, tragic and stomach- churning low. Maybe I’m being overly sensitive, maybe it’s because my wife is due to give birth in two weeks, but this barely reported incident really struck me.I’m director of a pro-Israel advocacy group here in Brussels, and I’ve been saying what I’m about to tell you so often to members of the European Parliament and their advisers that I’m beginning to sound like a broken record. But I promise you I will never stop saying it: what hope of peace is there when your supposed partners are incited to such a degree that they will send eight-year-old children to kill indiscriminately? What hope of peace when the Palestinian population is constantly fed a narrative that Jews, Israelis, are scum, pigs, dogs, apes, rapists, cockroaches that must be killed and constantly resisted? Whose “filthy feet” are a desecration? That every drop of Palestinian blood spilled in Jerusalem is “pure”? The worst part is that us, the population of Europe, we the taxpayers, are paying for this murder-provoking rhetoric.That’s not an exaggeration. The EU is the largest supporter of the Palestinian Authority in the world. Over the years PA President Mahmoud Abbas and his hate-preaching acolytes have received millions and millions in direct EU aid.Is this aid conditional on a rejection of incitement to violence? Does the EU say we will only fund you if you stop supporting violent acts, stop praising them and embracing the perpetrators as martyrs? Did it turn the funding tap down significantly when Mr Abbas made his ‘filthy feet’ comment, like the US Congress did? That would be a big, fat, and in our opinion, utterly shameful “no.”The PA knows that whatever it does and says, it will get its millions in pocket money regardless. And that can’t be right, can it? That’s why I have made it my organization’s priority, through the establishment of a European Parliamentary Working Group, to look at the whole issue of how EU funding can and should be made conditional on a commitment – to borrow from the Northern Ireland Peace process playbook – to exclusively peaceful and democratic means.That means no incitement. That means laying the ground with your population and preparing them for peace. That means an end to language that dehumanizes.And above all it means that sending two eight-year-old kids with knives to murder indiscriminately should result in a heavy political price being paid.Until that happens, let’s not kid ourselves that there can be a meaningful peace process.The author is the director of EIPA: Europe Israel Public Affairs, a multi-disciplinary pro-Israel advocacy group based in Brussels, with offices in Paris and Berlin.