Who are the people killed by Nouri al-Maliki, and why?

During his tenure from 2006 to 2014 he used the same routine as previous Iraqi governments, increasing his authoritarian power to maintain control. 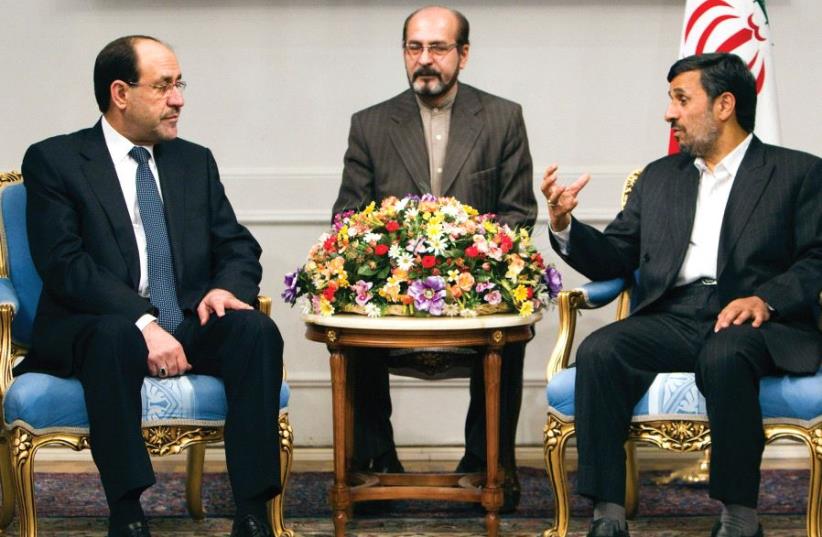 FORMER IRANIAN president Mahmoud Ahmadinejad (right) speaks with Iraqi Prime Minister Nuri al-Maliki (left) during a 2010 meeting in Tehran
(photo credit: REUTERS)
Advertisement
Former Iraqi prime minister Nouri al-Maliki raised the power of sectarianism to new heights and proved to the world that Shi’ites, Sunnis and Kurds cannot live together. Maliki proved that Iraqi rulers only change names, but not mentality.During his tenure from 2006 to 2014 he used the same routine as previous Iraqi governments, increasing his authoritarian power to maintain control. Maliki sees Iraq as a country where there must be revenge against Sunni leaders for suppressing Shi’ites under Saddam Hussein.The sectarian strife between Shi’ites and Sunnis is not a new thing, and it is not restricted to Iraq. It has a history going back 1,400 years, to a dispute following the death of Muhammad in 632 CE over the succession.The schism intensified after the Battle of Karbala, in which Hussein ibn Ali and his household were killed by the ruling Umayyad Caliph Yazid I, and the outcry for revenge divided the early Islamic community.Today Maliki, who left power in 2014, has huge support from Iran and wants to take revenge once again and suppress Iraq, encouraging Shi’ites with memories of the Hussein regime and the killing of Ali. Many Shi’ites protested last week in Baghdad calling for revenge. They even killed some Sunnis.Maliki now represents the Iranian agenda, and if in the past he couldn’t carry it out because Sunnis stood against him in the government, he purposely surrendered Sunni areas to Islamic State (ISIS) in 2014 to create an excuse to erase Sunnis and Kurds and make their areas a burned land. Many Iraqi army soldiers who were supposed to stand against ISIS in 2014 have said how they were told not to fight to hold Mosul and Ramadi when ISIS attacked.Those who have been obstacles to the Maliki agenda have been hunted down and killed by militant groups. We attempted to make a list of all the cases of opponents who have been assassinated by Maliki’s henchmen and the list has come to 600 people, including academics, pilots, soldiers, physicians, chemists, tribal leaders and those in various governorates such as Basra in the south, Najaf, Dhi Qar, Maysan, Baghdad and Anbar. In recent times Maliki has even tried to seek support for various Iraqi groups, including Kurdish political parties such as the Change Movement and Patriotic Union of Kurdistan, and other pro-Iranian parties. He also seeks more support from Shi’ite clerics in Iran, including representatives of Ayatollah Khamenei in Najaf.He works closley with the Shi’ite religious establishment and it helps Maliki in his relations with Hashd al-Shaabi (Popular Mobilization Units-PMU), and Iranian-backed Shi’ite militias in Iraq. In many ways the PMU have become like the Iranian Revolutionary Guards Corps. They too are supported financially by Iran. For this reason the Shi’ite militias are seen as a threat by Iraqi Sunnis who perceive an Iranian agenda behind them and a plan to erase Sunnis and create a massive Shi’ite crescent that stretches from Syria to Iran.The author is a Middle Easy analyst.