Who will write France’s future?

What story might a futuristic novel published in 2057 tell? 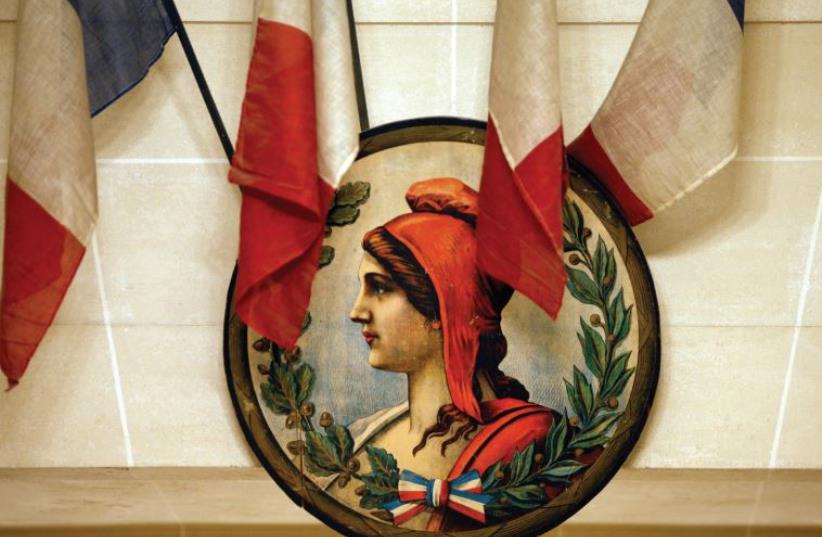 WHAT DOES the future hold for the land of enlightenment?
(photo credit: REUTERS)
Advertisement
Two high-profile French novels, dissimilar in timing and tone, portray two influential visions of France in the future. Not just good reads (and both translated into English), together they stimulate thought about the country’s crises of immigration and cultural change.Jean Raspail (1925-) imagines a racial invasion coming by sea, of rafts and boats taking off from the Indian subcontinent and heading slowly, inexorably for the south of France. In Le Camp des Saints (The Camp of the Saints, 1973), he primarily documents the helpless, panicked French reaction as the horde (a word used 34 times) “kept coming to join the swelling numbers.”It’s a stark dystopian fantasy about the white race and European life that corresponds to fears articulated by no less than Charles de Gaulle, the dominant politician of post-war France, who welcomed non-white French citizens “on condition that they remain a small minority. Otherwise, France would no longer be France. We are, after all, primarily a European people of the white race.”Camp also anticipates the notion of “The Great Replacement” (Le Grand Remplacement) conceptualized by the French intellectual Renaud Camus, which anticipates the quick replacement “of the historic people of our country by peoples of immigrant origin who are overwhelmingly non-European.” Roughly this same fear – of immigrants pushing the indigenous French people aside and taking over the country – inspires the National Front party, now polling close to 30 percent of the vote and growing.Michel Houellebecq (1956-) tells the story not of a country (France) but of an individual (François) in Soumission (Submission, 2015). François is a weary, somewhat decadent professor of the decadent movement in French literature. He lacks family, friends and ambition; although only in his mid-40s, his will to live has eroded through the ennui of take-out food and a procession of interchangeable sex partners.When an ostensibly moderate Muslim politician unexpectedly becomes president of France in 2022, many radical changes to French life follow quickly. In a surprise twist, what begins ominously (a corpse in the gas station) soon enough turns benign (delicious Middle Eastern food). Lured by a well-paying and satisfying job with the perk of having access to marry multiple pretty, covered students, François readily abandons his old life and converts to Islam, which offers him the rewards of luxury, exoticism and patriarchy.If the 1973 novel never mentions the words Islam or Muslim, its 2015 counterpart dwells on them both – starting with the title: Islam in Arabic means “submission.”Conversely, the first book focuses on race while the second hardly notices it (François’ favorite prostitute is North African). One takeover ends hellishly, the other agreeably. The earlier book is an apocalyptic political tract disguised as entertainment, the later one offers a literary and sardonic take on Europe’s loss of will while not expressing animus toward Islam or Muslims. The one documents an aggression, the other a consolation.The novels capture two major, almost contradictory post-war cross-currents: The lure of a wealthy and free Europe for remote, impoverished peoples, especially Muslims; and the lure of a vigorous Islam for an enfeebled, post-Christian Europe. Both ways, Europe – just 7% of the world’s landmass but the dominant region for five centuries, 1450-1950 – stands to lose its customs, culture and mores, becoming a mere extension, or even a dependency, of North Africa.The novels imply that the alarming concern expressed decades ago (masses of angry, violent dark people) has become familiar and even benign (Middle Eastern universities pay higher salaries). They suggest that the time for panic has passed, replaced by a time for graceful capitulation.Camp made a splash on the Right when it first appeared but both books address more widely-held concerns today; Camp’s reissue in 2011 rocketed to the top of the bestseller list in France and Submission simultaneously became the #1 bestseller four years later in France, Italy and Germany.Forty-two years separate these two books; jumping another 42 years ahead, what story might a futuristic novel published in 2057 tell? Such thinkers as Oriana Fallaci, Bat Ye’or and Mark Steyn would expect an account that assumes Islam’s victory and narrates the chasing down of France’s few remaining Christian believers. But I predict nearly the opposite: a report that assumes Camus’ great replacement failed and imagines a violent repression of Muslims (in the words of Claire Berlinski) “shambling out of the mists of European history” accompanied by a nativist French reassertion.The author is president of the Middle East Forum.
© 2016 by Daniel Pipes. All rights reserved.
Advertisement
Subscribe for our daily newsletter