Anti-Semitism is irrational, sometimes unconscious and often counterproductive – as it will be to the mission of the UCC and other churches who have embraced the BDS poison. 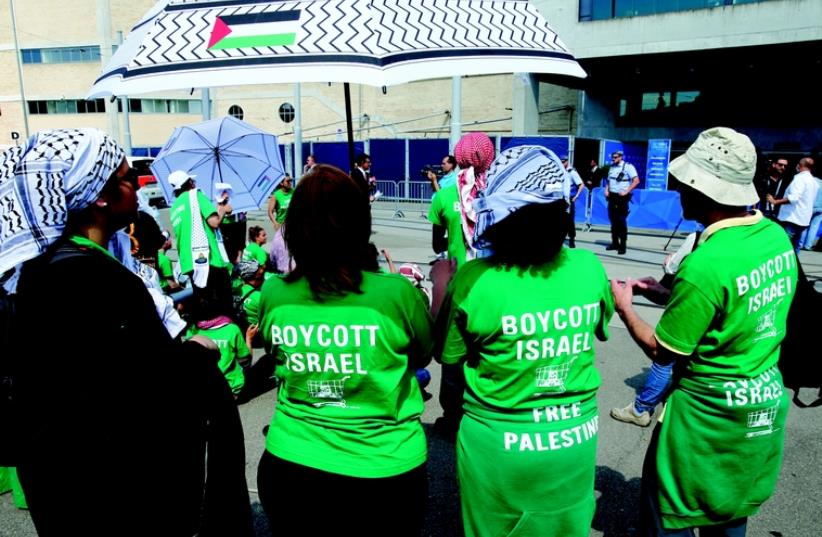 Des militants du BDS en action
(photo credit: REUTERS)
Advertisement
Islamic State at the gates. Iran on the brink. You can be forgiven if you didn’t hear that the General Synod of the United Church of Christ (UCC) just overwhelmingly passed a resolution to divest from companies that “profit from the occupation” and to boycott settlement products.In the era of massive anti-Israel campaigns from the UN to US campuses, why should we care about a small and rapidly shrinking denomination? In fact, their votes provide us a shocking moment of clarity into the mindset of Boycott, Divestment and Sanctions (BDS) supporters in mainline Protestant churches. For once, they came clean about what they really hoped to accomplish: Sticking it to the Jews, it turns out, is more important than pursuing global justice – or even protecting fellow Christians.Two resolutions aimed at Israel reached the floor. Each required a two-thirds majority. The first to be voted on was the divestment and boycott resolution, and it passed by a vote of 508 to 124. This after a rousing appeal by Rev. Mitri Raheb, one of the worst anti-Israel Palestinian agitators, who flew from Israel for the event. Raheb used the occasion to change every reference to Israel in the scriptural passages he read with the word “Palestine.”
See the latest opinion pieces on our page
(Raheb on an earlier occasion has argued that Jesus was a Palestinian; that he, Raheb, would be a closer DNA match to Jesus than Israelis, who are imposters descended from Khazars of the Russian steppes who converted to Judaism a thousand years ago.) No equal time was given to any pro-Israel speaker. Also absent was any condemnation of Hamas rockets and tunnels, of Palestinian Authority-inspired terrorism, or of the saturation of Palestinian media with exhortations to hate all Jews.A SECOND resolution only garnered about 51 percent of the vote, thus failing to achieve the required two-thirds. Nonetheless, for the first time, a majority of delegates at a US church convention had voted to hang the “apartheid” noose around the Jewish state’s neck.The failure to achieve the twothirds vote was likely due to an impassioned speech by the Rev.Marisa Brown Ludwig, a courageous associate pastor from Massachusetts, whose church dates back to 1714. Rev. Ludwig argued that passing such a resolution would be a “knife in the heart” of their Jewish friends. As the last speaker before the vote, her words apparently had some effect. The “big lie” would have to wait to gain this church’s seal of approval.The digital ink on the two resolutions had scarcely dried when Rev. John Dorhauer, the new general minister and UCC president, made a remarkably honest statement. He said that he had no choice but to comply with the vote, but that he did so “with a deep awareness at the pain that I will cause to people...wondering if the benefits of our divesting from those companies is equal in cost to the relationships that we have with people who are critical to our movement towards justice, not just in Palestine but in many other places.”In other words, while the theme of the synod was justice, and aware of the chilling effect the resolutions would have on joint work with other partners in parts of the world where the UCC could make a difference, the delegates still prioritized sticking it to the Jews.Indeed, the synod did not turn its attention to trouble spots around the world in which hundreds of thousands have lost their lives, women and girls have been kidnapped and raped, children forced into armies and 60 million people in the last few years have left their native lands desperately seeking a safe future.Nor did the synod spend time developing an action plan to assist those we would think are most on their minds: endangered and persecuted Christians. Entire historic Christian communities have been destroyed. Christians live in perpetual fear of their lives in a huge swath of the globe from Nigeria northeast to Iran. None of that seemed to matter to the church activists of the UCC. Demonizing the Jewish state does.Anti-Semitism is irrational, sometimes unconscious and often counterproductive – as it will be to the mission of the UCC and other churches who have embraced the BDS poison. Whatever resolutions they pass about the Holy Land, we can be sure that no Palestinian will be helped, hopes for peace will be pushed back further as Palestinian leaders are given to believe that they can have it all without even having to return to the negotiating table.Those Jews committed to interfaith dialogue and mutual trust with Christians should take heed of the extreme anti-Israel sentiments seeping their way into mainstream Christendom. These developments demand that we engage our Christian neighbors, that we debunk the lies – political and theological – with the truth about our people’s 3,500- year relationship with the Land of Israel. If we fail to do so, the UCC votes will be a mere harbinger of the onslaught to come. Rabbi Abraham Cooper is Associate Dean of the Simon Wiesenthal Center. Rabbi Yitzchok Adlerstein is the Wiesenthal Center’s Director of Interfaith Affairs.