Was this a reversion to segregation, like the Jim Crow laws, or an expression of women’s empowerment and multiculturalism at its best? To me, choice is usually a hallmark of democracy. 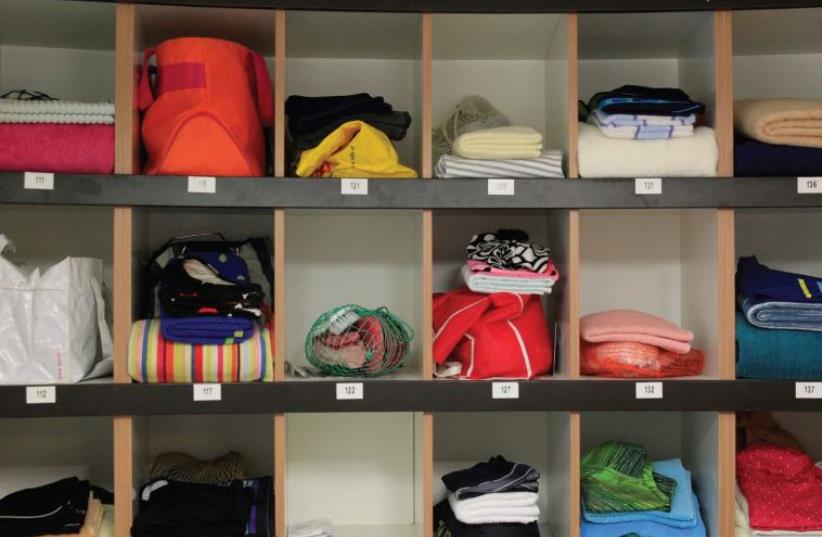 Towels and swimsuits are seen at a private pool
(photo credit: REUTERS)
Advertisement
Summertime, and the living isn’t easy if you can’t go swimming. Today, it’s 35° and humid. That would be 95° Fahrenheit in Brooklyn.I’m in line at a public swimming pool, accompanied by my sister and five granddaughters in below-elbow sleeves. The cashier inquires if perhaps we might be seeking the gender-separate swimming pool entrance 30 meters away. Indeed. As it happens, we’re seeking the women’s swim we’ve seen advertised. There are womens’/girls’ hours six days a week, from 3:30 to 10 p.m. I’m surprised and pleased that there’s a choice: two swimming pools – one gender-separated and one mixed to provide for the needs of the community.This is Rehovot, not Bnei Brak or my city of Jerusalem. Somehow, this small city of fewer than 120,000 people manages to both be home to the renowned Weizmann Institute of Science and provide generous separate swimming hours for those citizens who prefer to swim in gender-separate pools.THE TERM “gender-separate” brings to mind the bathroom controversy in the United States, related mostly to transgender Americans. According to Time magazine, “the bathroom has also been a battleground for women and handicapped workers fighting for equal treatment in the workplace. Because of the nature of things people do in the bathroom, it can be a space where they feel exposed or vulnerable and therefore resist change.”Swimming pools are also places where people feel exposed and vulnerable – not only those women who are used to covering their hair, elbows and knees, and not just the elderly or the corpulent, but a large number of women prefer not to be seen in bathing suits by members of the opposite sex.On June 1, the editorial board of The New York Times condemned separate swimming.“Four times a week this summer – Mondays, Wednesdays and Fridays from 9:15 to 11 a.m., and Sunday afternoons from 2:45 to 4:45 – a public swimming pool on Bedford Avenue in Brooklyn will be temporarily unmoored from the laws of New York City and the Constitution, and commonly held principles of fairness and equal access.”The editorial went on to say that this policy had been instituted a quarter of a century ago “apparently without any serious community objection.” But now, one anonymous complaint had moved New York City’s Commission on Human Rights to notify the parks department that the policy violated the law.The pool in question was in Williamsburg, home to tens of thousands of hassidic Jews. Separate hours had been approved in less-likely places in the US, among them Harvard and Princeton, with the activists being mostly Muslim women. Municipal pools offered gender- separate swimming in Denmark and Sweden, countries with reputations for a relaxed attitude to nudity.The Times editorial pronounced that the exemptions to human rights law only include those “on bona fide considerations of public policy,” but this case, “with its strong odor of religious intrusion into secular space – does not seem bona fide at all.”Negative reactions to the particular choice of language and the decision to pick on Jewish women while ignoring the growing number of communities sensitive to the desires of Muslim women were made by many before me. Legal experts weighed in on both sides, and so did feminists.Was this a reversion to segregation, like the Jim Crow laws, or an expression of women’s empowerment and multiculturalism at its best? To me, choice is usually a hallmark of democracy.The repercussions go beyond clothing style to impact women’s health. We know from research done right here in Jerusalem by the Linda Joy Pollin Cardiovascular Wellness Center for Women at the Hadassah Medical Organization, that women in very religious Jewish and Muslim homes in Jerusalem – usually with many children, less money for nutritious food and less time for self-care – have high levels of diabetes and dangerous heart disease.“They are limited in what they can do within the norms of their community,” says Dr. Donna Zfat, who heads the center, where cross-cultural gaps are taken into consideration when planning hearthealth outreach programs. The same women who prefer to swim among other women are a high-risk group for heart disease and desperately need the exercise.I wonder how many women’s health initiatives or women’s gyms or women’s yoga classes are running in government- sponsored institutions. (If you Google “exercise classes for women in Brooklyn,” you get 798,000 mentions.) IN BROOKLYN, a compromise was reached for the swimming pool, with the limited hours cut back further. In my experience in Israel, women’s swim hours are intensely crowded, which makes me guess that people who want separate swimming are under-serviced.I once attended a gathering for women’s health advocates in Abu Ghosh. The women focused on healthier eating and more exercise. After they received permission for women’s walking groups from their imam, they convinced him to let them swim if they went during separate- swimming hours. I’m always touched to see women take off their sheitels and hijabs and get into the water.In Rehovot, the Weisgal Pool – named for a former president of the Weizmann Institute – fills up. Toward evening, women drag in ice chests for a girls’ night out on the lawn. Hats off to Rehovot.

The author is a Jerusalem writer who focuses on the wondrous stories of modern Israel. She serves as the Israel director of public relations for Hadassah, the Women’s Zionist Organization of America. The views in her columns are her own.