The IDF has neither confirmed nor denied the reports, as is their policy regarding foreign reports on purported Israeli strikes.

IAF fighter jet during the Red Flag joint exercise at Nellis air force base in Nevada
(photo credit: COURTESY IDF SPOKESMAN'S OFFICE)
Advertisement
The Syrian regime has accused Israel of launching surface-to-surface missiles targeting the Mezzeh airbase near Damascus early Wednesday morning, causing damage but no casualties.According to a military source quoted by Syria’s SANA state media “The Israeli enemy launched at 3:00 am Wednesday a number of surface-to-surface missiles from inside the occupied territories to the west of Tall Abu al-Nada (hill) that landed in the surroundings of al-Mezzeh Airport west of Damascus.”Earlier on Wednesday, Hezbollah accused the Israeli Air Force of striking Mezze west of the Syrian capital close to President Bashar Assad’s palace at around 4 am, causing large explosions but no casualties. According to Syrian reports the strike would “only make the Syrian Arab Army even more determined to cut off the hands of the terrorists agents of the Zionist entity, which should be held fully responsible for the repercussions and consequences of these criminal attacks.” t. 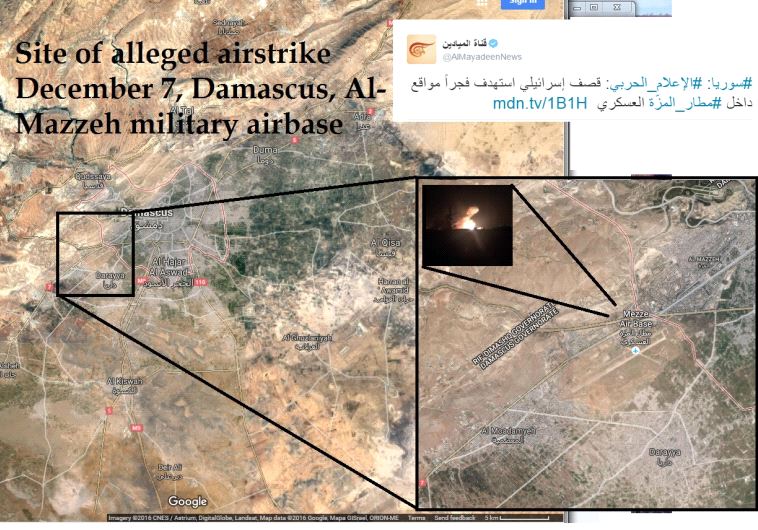 Map of location of allefed strikeUnnamed Syrian sources quoted by Lebanon’s Al-Nashrah, the strikes targeted the airport’s runway and operations command center while another unnamed source said that the strikes targeted the regime’s 4th division operations center at the airport.The airbase is home to the headquarters of the notorious air force intelligence service and its prison. The IDF has neither confirmed nor denied the alleged strikes, as is their policy regarding foreign reports on purported Israeli strikes. Damascus has still not confirmed the report. The allegations mark the second instance of suspected Israeli strikes against targets in Syria in two weeks. While Syrian state media said the attack came from “inside the occupied territories to the west of Tall Abu al-Nada,” or Mount Avital in the Golan Heights, Hezbollah’s Al Maydeen channel said the group “was almost certain” that the Israeli Air Force carried the strikes from Lebanese airspace, similar to the last reported Israeli airstrike against Hezbollah weapons convoys near Damascus as well as an arsenal belonging to the Syrian Army's Fourth Battalion. The border with Syria has been tense since the war there erupted in 2011, and while Israel has never publicly admitted to carrying out any strikes, Israel is suspected of carrying out occasional retaliatory strikes on Syria after stray rockets or mortar rounds struck Israeli territory.In April, Prime Minister Benjamin Netanyahu admitted for the first time that the IDF had carried out strikes in Syrian territory."We will not agree to the supply of advanced weaponry to Hezbollah from Syria and Lebanon," he said at the time. "We will not agree to the creation of a second terror front on the Golan Heights. These are the red lines that we have set and they remain the red lines of the State of Israel."On Tuesday night the IDF Spokesman’s twitter account posted a map showing over 200 towns and villages which Hezbollah uses as operations bases, as well as thousands of potential targets that Israel could strike.Speaking at the Jerusalem Post Diplomatic Conference in late November, Brig.Gen. Ram Yavne, Head of the IDF Strategic Division said that almost every Shiite village of neighborhood in southern Lebanon is being used Hezbollah fighters.One civilian village pointed out by Yavne, Chakra which has 4,000 Shiite inhabitants, “reflects the situation every neighborhood, town, or village of Shiite in Lebanon.  In that village, ⅓ of the homes includes a military assets of Hezbollah.”Several weapons warehouses, rocket launching sites, anti-tank positions, underground infrastructures and a command post in Chakra was identified on the map.