A Hungarian way to get through the holidays

By PASCALE PEREZ-RUBIN
SEPTEMBER 28, 2017 15:40
Hungarian chopped liver.
(photo credit: PASCALE PEREZ-RUBIN)
Nurit Peled has fond memories of spending time in her grandparents’ kitchen in Safed as they prepared meals for hotels in the area for the holidays. Peled, who is currently the vice principal of the Hadassah WIZO Canada High School in Netanya, recently added a baking course to her school’s curriculum. Over the years, Peled has participated in cooking and baking workshops with some of Israel’s top chefs and currently writes a blog with pastry chef Oren Bakar.I was overjoyed when Peled recently agreed to meet with me for a day of preparing special Hungarian dishes for the holidays.HUNGARIAN CHOPPED LIVER
Makes 8 to 10 servings
½ kg. liver, cleaned and koshered
2 to 3 Tbsp. oil
2 onions, sliced thinly
1 tsp. paprika Salt and pepper, to taste
3 hardboiled eggs 1 Tbsp. oil
4 Tbsp. freshly chopped onion
Read More...
Roast liver over an open flame. Salt the liver.Heat the oil in a large pan and fry the onion until caramelized. Add the liver and fry. Add the paprika, salt and pepper. Mince the liver with the hardboiled eggs. Add the oil and chopped onion. Store in the fridge until serving.HUNGARIAN MEAT-FILLED PANCAKES
Makes 8 to 10 servings
1¼ cups flour, sifted
2 tsp. oil
1 cup water
3 eggs, beaten
1 tsp. sugar
Pinch salt
2 tsp. oil Meat filling:
2 Tbsp. oil
2 onions, chopped thinly
½ kg. ground beef
½ tsp. salt
1 tsp. paprika
¼ tsp. caraway, ground
1 light green pepper, cut into small cubes
1 tomato, peeled, seeded and chopped
½ cup soup stock (can also use 1 tsp. soup powder dissolved in boiling water) Sauce:
50 gr. margarine or oil
¾ Tbsp. flour, sifted
1½ cups prepared soup stock
6 Tbsp. tomatoes, peeled, seeded and crushed
Salt and pepper, to taste
¼ tsp. paprika
2 tsp. lemon juice To make the pancakes, pour the flour into a large bowl. Gradually add the eggs while beating with a whisk. Add the rest of the ingredients and beat well. Let mixture sit for 2 hours. Mix again and add another ¾ cup water while beating.In a 20 cm. pan, heat the remaining 2 Tbsp. oil over low flame. Use a ladle to pour the batter onto the frying pan. Shake the pan a little to make sure the batter covers the entire pan in a thin layer.Fry pancake for two minutes until the sides lift up. Flip it over and fry on other side. Prepare all of the pancakes the same way.To prepare the filling, heat the oil in a large pan and fry the onion until golden. Add the meat and fry until it turns gray.Add the salt, paprika and caraway and stir. Add the green peppers and tomatoes. Stir-fry for 10 minutes. Pour off extra liquid into a bowl and reserve for later use. Add the soup stock to the meat, cover and cook for 30 minutes over a low flame.To prepare the sauce, melt the margarine, add the flour and fry until golden. Add the tomatoes, soup stock and spices. Stir and cook while mixing constantly until sauce thickens. Add the lemon juice and stir. Pour half of the sauce into the meat mixture and mix well.Put two heaping spoonfuls of filling on the pancake and fold up like an envelope. Prepare all of the pancakes in the same fashion. Arrange in a pan so that they’re all touching each other.Stir the sauce over a low flame. Add the remaining liquid that you poured off from the meat. Then, pour the sauce over the stuffed pancakes and put pan in an oven that has been preheated to a medium heat. Bake for five minutes and serve immediately.RUSTED ROAST
Makes 8 to 10 servings 2 kg. beef, cut into cubes
1 cup flour, sifted 8 Tbsp. oil
3 onions, chopped finely
2 cloves of garlic, crushed
3 red peppers, cut into small cubes
3 carrots, coarsely grated
1 Tbsp. paprika
1 cup tomatoes, peeled, seeded, cut into cubes
1 cup semi-dry red wine
1 tsp. ground caraway Salt and pepper, to taste Dumplings:
1½ cups flour, sifted
1 large egg
1 egg yolk
3½ Tbsp. water
1 Tbsp. oil
1 tsp. salt Flour the beef cubes and remove excess flour. Heat half of the oil in a large, flat pot and sear beef on all sides. Remove and set aside in a bowl.Add the rest of the oil and heat. Fry the onion, garlic, peppers and grated carrots. Stir well. Add the tomatoes and pour in the wine. Add the spices. Stir and then add the meat. Pour in water so that it just covers the meat. Cover the pot and cook for four hours over a low flame.In a medium bowl, mix all the dumpling ingredients. Cover and let rest for 20 minutes.Pour water into a large pot. Add 1 tsp. salt and bring to a boil.Split the dough into an even number of pieces and shape each one into a thin string. Cut the strings into pieces and then drop them into boiling water. Alternatively, you can just tear off pieces of the string and drop them into the boiling water.Stir the pieces a little so they don’t stick to the bottom of the pot. Cook for 8 to 10 minutes or until they float. Remove and rinse in cold water.Heat margarine in a pan and add cooked dumplings. Stir gently.Serve dumplings on a separate plate with roast. MEAT SOUP 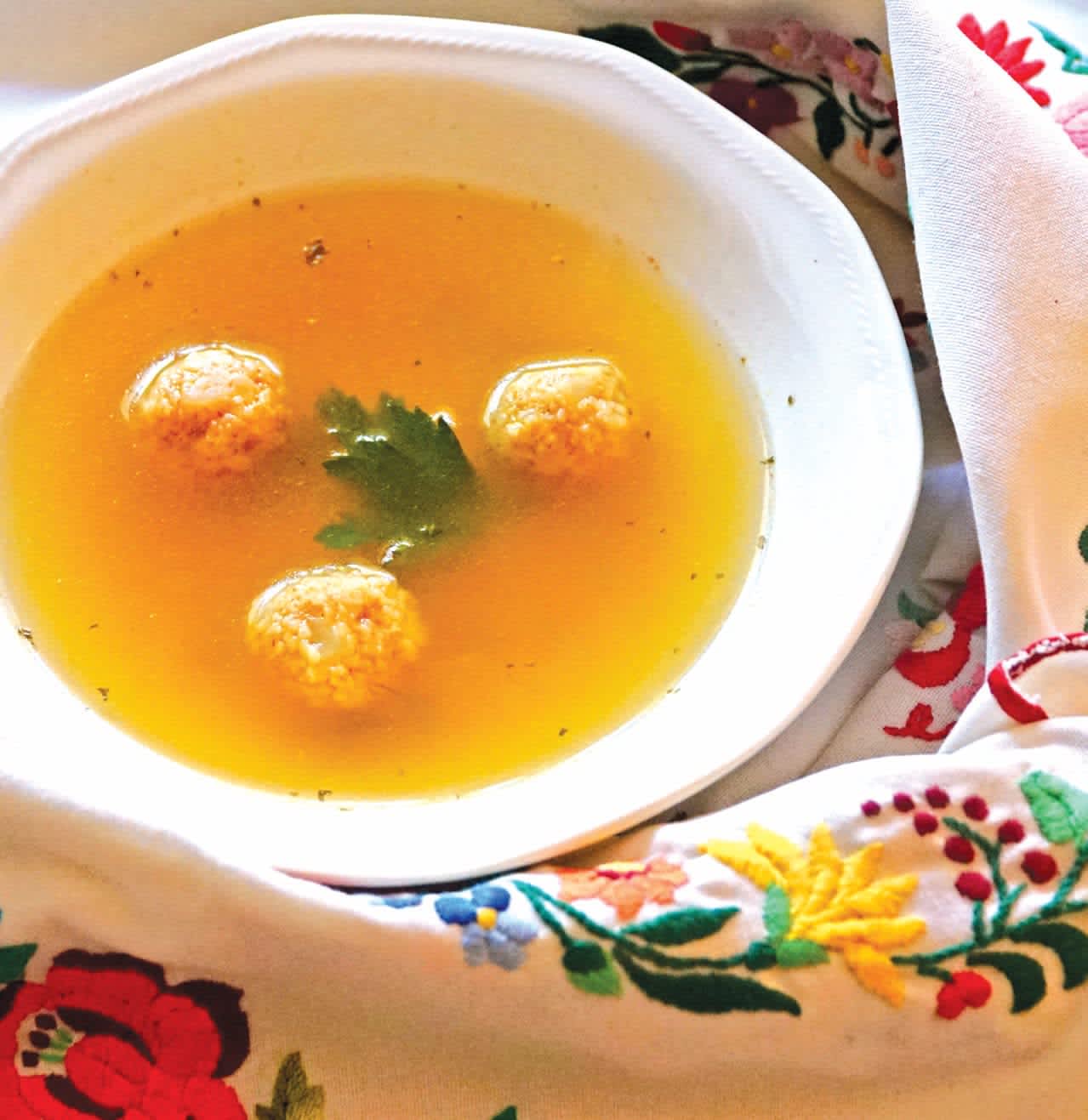 Makes 8 to 10
servings 5 bones
250 gr. beef
12 cups of water
1 Tbsp. salt
2 onions
4 cloves of garlic
3 carrots
1 celery root
2 parsnips
1 light green pepper
1 tomato
5 cabbage leaves
1 bunch of parsley
1 bunch of dill
8 whole peppercorns
½ tsp. paprika For meatballs:
2 slices of bread soaked in water and then squeezed
300 gr. beef (neck)
1 small potato, grated and squeezed
2 Tbsp. semolina
½ tsp. paprika Salt and pepper to taste Place the bones and meat in a tall, large pot. Add the water and salt and bring to a boil over medium flame. Lower the flame and cook for an hour. Remove the froth that forms on top.Peel and wash the vegetables and add them to the pot whole. Add the spices, stir and bring to a boil. Cover and cook over medium-low flame for 2½ hours.To prepare the meatballs, mince the bread with the meat and transfer to a bowl. Add the grated potatoes, semolina, paprika, salt and pepper. Mix well.Form small 2- to 3-cm. balls.Pour five ladles of soup into a separate pot and bring to a boil. Add the meatballs and cook until they float. Remove and put aside.Strain the soup. Serve the meat and vegetables separately, or use them as filling for another dish. Bring the soup to a boil, add the meatballs. Heat for another minute then serve soup with 3 meatballs in each bowl. Garnish with parsley leaves. HUNGARIAN HONEY CAKE 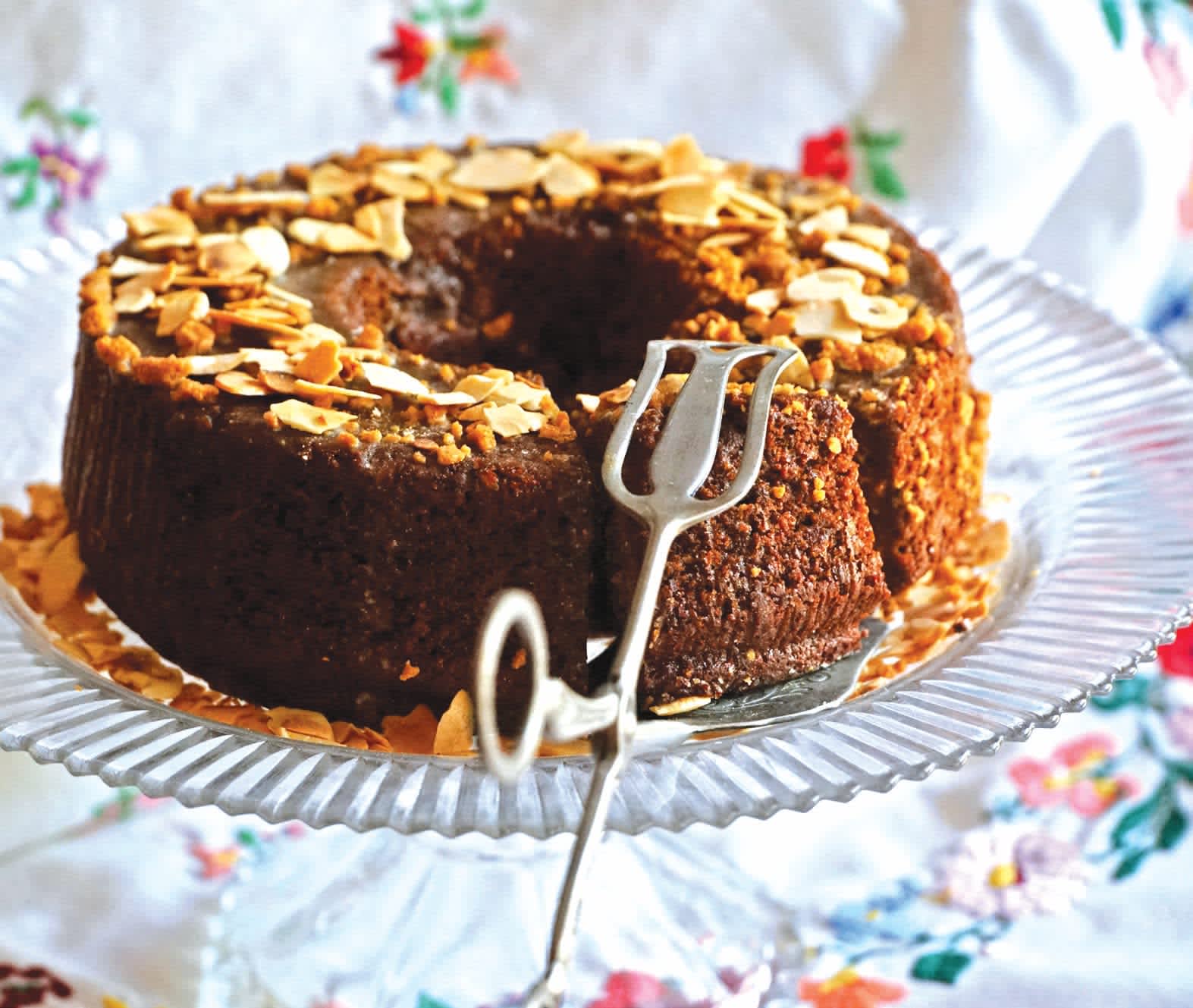