AMIT Children: Ever heard of ‘The Gogya’?

Meet AMIT’s Gogya: Based on the Hebrew word for pedagogy, it is both a physical space and an educational philosophy
(photo credit: AMIT)
Advertisement

Few have, but the innovative educational platform used in AMIT schools is reviving a tired Israeli public school system.

As part of her 10th grade studies, Shirel Gueta, a 15-year-old in Ako, Israel, is working with three classmates to create an app to match potential employers with people who have special needs and disabilities and are seeking work. It’s not just an academic exercise, but rather part of an Eco-Medicine project that brings students together with physicians and engineers to solve real-life challenges.

“We learn the problems and help find solutions,” Shirel explained. “It’s exciting because we get out of the classroom and it opens our minds in new ways.”

Gavriel Schuster, a 15-year-old 10th grader in Rehovot, is taking part through his school in a three-year project with fellow students to create, develop and find a market for products with possible commercial use. He said that after taking several courses on how to choose and research a viable product, “my group created a solution for a cast (for healing) that is reusable and water-proof.”

Next year judges from various industries will visit Gavriel’s school and choose the most promising products.

In a country whose public schools often operate with over-crowded classes and a traditional – many say outdated – frontal approach to teaching, Shirel and Gavriel are fortunate to attend schools in the AMIT educational network, which leads the country in innovation.

The schools take a holistic, multi-disciplinary educational approach that seeks to empower students, allowing them to realize their full potential – not just academically but in social skills and self-esteem as well.

Renana Menkin directs AMIT’s Ecosystem Track that allows students like Shirel and Gavriel to interact directly with professionals in the fields of science, math, engineering, medicine, finance and start-ups. “It’s about learning from the world by being out in the world,” she said, “and they grow from it.”

What’s particularly impressive is that 70 percent of the 40,000 students attending AMIT’s  96 schools around the country are from disadvantaged communities on the socioeconomic or geographic periphery.

“We wanted to level the playing field in public education,” said Audrey Axelrod Trachtman, president of AMIT (Hebrew for colleague), the American-based non-profit that since 1925 has focused on expanding educational opportunities for all children in Israel. “In dealing with income disparity and social disparity, education is the best leveler,” she said. “Not just in terms of academic excellence but in fostering values like leadership, self-confidence and responsibility in giving back to Israeli society.”

In its early years, AMIT focused its efforts on youth villages, vocational schools and residential facilities, a number of which housed orphans. But the organization has adjusted to societal changes; there are only two remaining residential schools. The rest serve elementary, high school and post-high school students from both religious and secular backgrounds in 32 cities around the country.

AMIT has been ranked as the No. 1 education network in the country for four consecutive years. Much of its success is attributed to a cutting-edge methodology developed by AMIT called the Gogya (from the Hebrew word for pedagogy) that is both a physical space and an educational philosophy emphasizing emotional development as well as academic excellence. 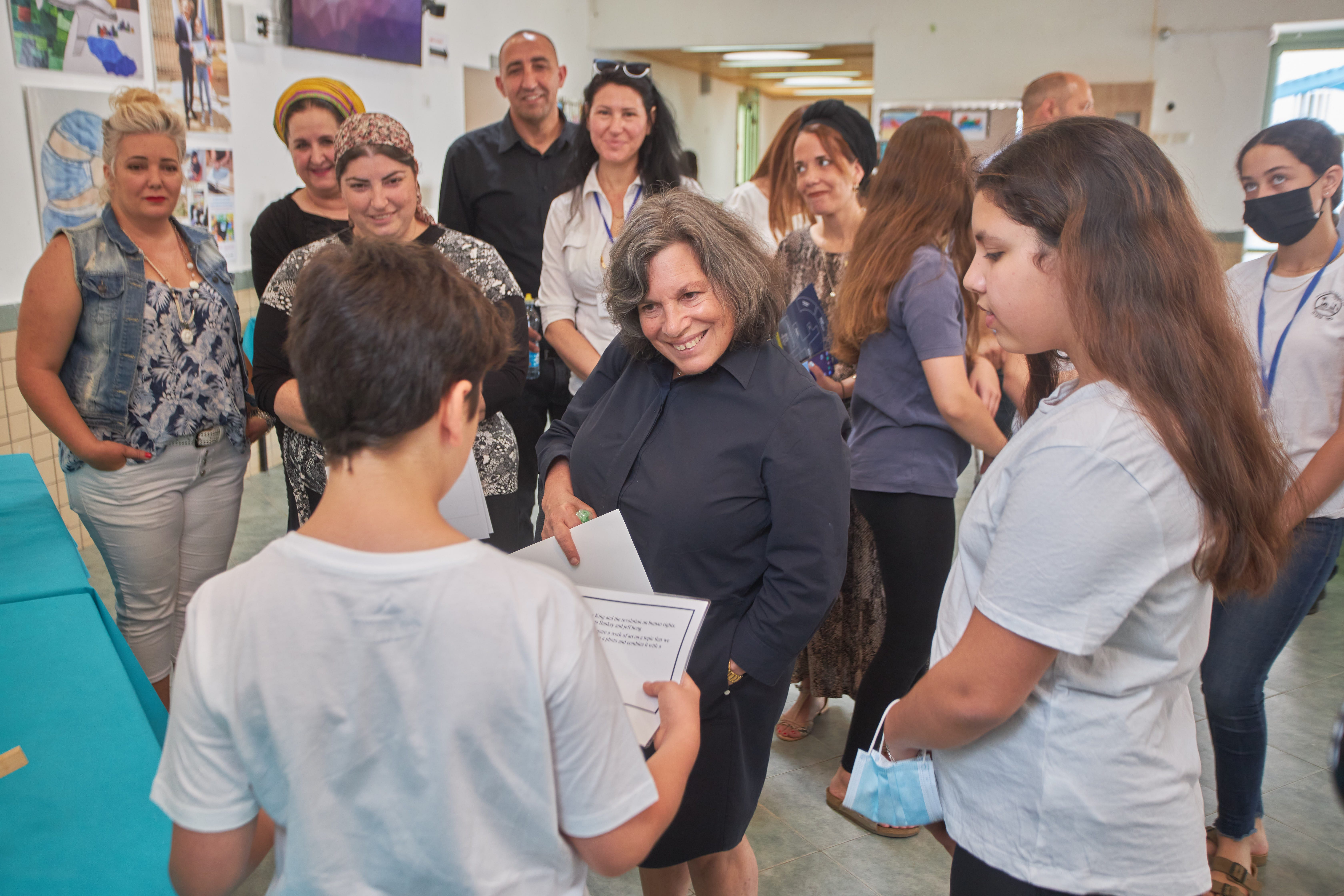 AMIT president Audrey Axelrod Trachtman visiting one of the organization’s 96 schools around the country (Credit: AMIT)

Launched in 2014 after years of research by visiting, and adapting elements of, a number of cutting-edge universities, private and Jewish day schools in America, the Gogya platform “brings the classroom into the real world and the real world into the classroom,” AMIT president Trachtman said.

She noted that in encouraging children to aim higher, and in giving them the tools to do so, the AMIT schools

are playing a key role in strengthening Israeli society by closing the gaps between the “haves” and the “have-nots.”

AMIT has embarked now on an ambitious project to expand the Gogya project to reach and revitalize schools throughout Israel and beyond. On November 22, 2022, at Sony Hall in New York City, famed violinist Yitzhak Perlman performed at an event previewing a planned $70 million campus in Kfar Batya for “educational transformation” that will include “training thousands of teachers in the Gogya method to be implemented throughout the AMIT network,” according to the organization’s website. (https://kfarbatya.org)

Miriam Koren, principal of Amit Bellow Ulpana Noga High School, explains that the Gogya offers “a dynamic, flexible space – a large room, the size of three classrooms – with chairs on wheels so students can move around, and tables for small groups, computer stations and walls and white boards to write on.”

The core values of the Gogya, she said, include “independence, cooperation in learning with a team, taking initiative and building self-confidence.”

The teaching that takes place is not from textbooks but is project-based, personalized, hands-on and experiential. The teacher’s role is more as mentor, presenting a challenge – whether it be in analyzing themes in a Jewish text or solving a math or science problem – and encouraging the students to approach it individually or in groups, large or small..

“I focus more on what the student is learning than on what the teacher is teaching,” said Koren, who has been at the school for six years. She said teachers are trained in ways to “break the boundaries of the classroom” and utilize 21st century tools to engage students in creative ways.

The high schools’ academic success can be measured in the high rate of students who graduate with a bagrut diploma, a prerequisite for higher education in Israel: 90 percent, compared to 70-82 percent in other academic schools.

“The students tend to develop a kind of grit during the high school years,” observed Koren, “stepping out of their comfort zone to challenge themselves.”

AMIT officials say the Kfar Batya campus will make Israel a global leader in education through the Gogya’s advancements and new methodologies. For now, students who have experienced the Gogya are pleased by how it is changed their views on what it means to be educated.

Shirel Gueta, the 10th grader in Ako, said school was boring before she was exposed to the Gogya. “Now we can explore and see what we are learning with our own eyes, not just by listening to the teacher. It’s changed my way of thinking, not being closed off in four walls. It gives you confidence to go out in the world.”

Gary Rosenblatt was editor and publisher of The Jewish Week from 1993 to 2019. Follow him at garyrosenblatt.substack.com

This article was written in cooperation with AMIT