Technological solutions for heating, cooling and much more!

“I like to solve complicated puzzles,” says Yossi Bornstein. “Things that people think are unsolvable.” Eight years after an unfortunate incident left him with post-traumatic stress and a disability, Bornstein has returned with a multitude of ideas and plans that he hopes will propel him into the first rank of hi-tech entrepreneurs.

Bornstein has four different projects that he is developing from the offices of Hirschman Holdings Maintenance Company in Jerusalem, together with a team of talented engineers. The first is called Ruach Chama (‘A warm wind’), and it is a solution that is intended to save energy using an upgraded heat pump in four standard household devices that use hot water– washing machines, dryers, dishwashers, and boilers.

Using a boiler during the winter months costs approximately NIS 1.70 per hour of operation, says Bornstein. He has developed a new type of flange for boilers that uses far less electricity and lowers the cost to just 25 agorot per hour. “When people use less electricity, it has an effect on a worldwide level,” he says.

Bornstein’s new technology is based on upgrading existing heat pump technology. The heat pump absorbs heat from the environment using an evaporation process that compresses the gas formed and emits the required heat. This dramatically reduces the energy needed to heat a water heater from 11.5 to 2.5 amps per hour. The system can be powered using solar and wind energy, providing off-grade operation. Unlike competing technologies that require the replacement of the entire boiler and are far more expensive, Bornstein says that his solution requires just a simple replacement of the flange, which will cost just $200. The Ruach Chama heating solution can be connected to radiators or even under-floor heating systems. 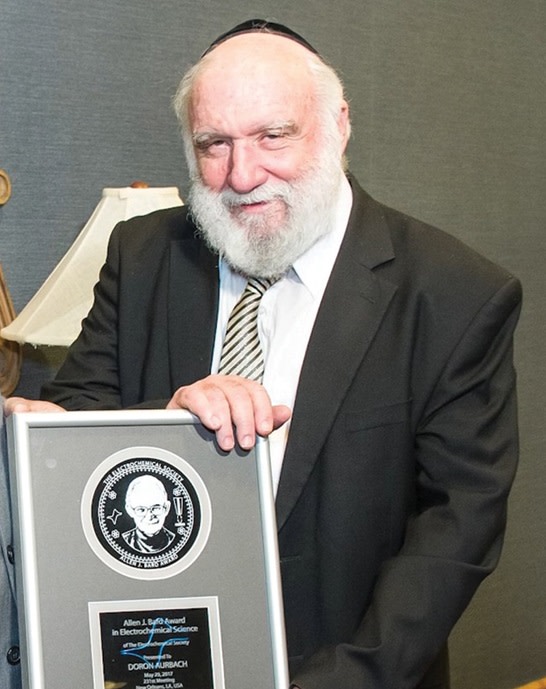 The project is led by Professor Doron Auerbach. Credit - PR

Ruach Chama is conducting all of its product development in Israel, and Professor Doron Auerbach, a world-renowned researcher and expert in the fields of electrochemistry and energy systems, is an integral part of Bornstein’s team. “We have the best minds and professors here in Israel,” says Bornstein. “I want the Jewish people to be a light to the nations.”

“As a customer, you won’t feel the difference,” Bornstein points out, because it is inside the appliance. “You will only notice the difference in the lower electric bill.” Bornstein says that his goal is to ensure a lower usage of electricity, correspondingly lower electric bills, and ultimately a reduction in the worldwide emission of greenhouse gases. The company is planning on expanding the heating pump solution to industry in phase II of the project. “I didn’t invent the wheel,” he says. “I took something that hadn’t been changed for 100 years, and I made some technological innovations to it.”

Yossi Bornstein’s second business is intended to solve gasoline fraud conducted by people who establish fictitious companies, that he says is costing the Israeli government upwards of NIS 500 million per year. Bornstein explains: “Gas in Israel costs roughly NIS 7 per liter. If one has a business, the car belongs to the business, and the Israeli government allows the owner to deduct NIS 1.50 per liter as a business expense.” Bornstein began working on this project in 2014.

In Israel, certain unscrupulous people create a company and buy cars or other vehicles but don’t actually use them. They then call the gas company, inform them they own a business, and buy a large quantity of gas that is delivered to them, to be used for their fleet of cars, that they don’t use. They then deduct NIS 1.50 from their per-liter cost as a business expense, call a neighboring gas station, and sell the gas to the station at a discount. In this manner, the tax authorities are being bilked out of hundreds of millions of shekels.

Bornstein says he has a solution. “From now on,” he says, “businesses will not receive a rebate for gas expenses based on how much gas they purchased, but rather on how much gas they actually use.” How can this be calculated? Bornstein says the answer lies in the OBD, or on-board diagnostics, a computer system built into every car that monitors vehicle systems such as the engine, fuel pumps, the exhaust and much more. The company integrates existing technologies, through which they can extract the data of the actual amount of fuel used from the on-board diagnostic systems. Bornstein is working with I.S.R. Technologies in Israel and expects to have the system running in just a few months. He says that this solution will also be used in other countries that allow business fuel deductions in order to prevent cheating.

Bornstein’s third project is a defense-oriented invention that he calls ‘Esh Shamayim,’ or ‘Fire from Heaven.’ “Speed is important on the battlefield,” says Bornstein, who predicts that future conflicts will be fought with thousands of drones attacking multiple locations in seconds. Drone technology is advancing by leaps and bounds, both in terms of performance and lower costs. Low-cost drones are easy to operate and can be difficult to intercept, making them a serious threat in battle and terrorist and criminal incidents. Standard missile defense systems, such as Israel’s Iron Dome, will be incapable of intercepting a vast army of drones attacking in a matter of seconds.

The Esh Shamayim is a tank-like device that will be able to intercept drones using a “smart” multi-purpose cannon with a firing rate of 6,000 bullets per minute, which can provide an immediate response to an army of drones. The Esh Shamayim will be simple to operate and will require just one operator with minimal training, and it will consist of largely off-the-shelf parts, making it inexpensive to manufacture and maintain.  Bornstein again touts his advantage in employing creative solutions rather than ‘inventing the wheel.’ The company is developing unique algorithms, he says, that will enable all of the standard systems in the device to communicate with each other and work efficiently. These advantages position Esh Shamayim as an ideal solution for the price-sensitive semi-security market.

The fourth and final project disclosed by Bornstein is called ‘Best Air,’ a new type of home air conditioning unit that does not require an external unit outside the home. This project, like Ruach Chama, was in development until the unfortunate incident that incapacitated him, and he has revitalized the project in recent months. In traditional air conditioners used today, the outside unit the part of an air conditioning system that contains the compressor, propeller fan, circuit board and heat exchange coil. It’s situated outside and pumps refrigerant to and from its companion indoor unit. We don’t know how Yossi has solved this problem, but we’re sure he’s got a clever solution!