EuroBasket: Close, but not close enough 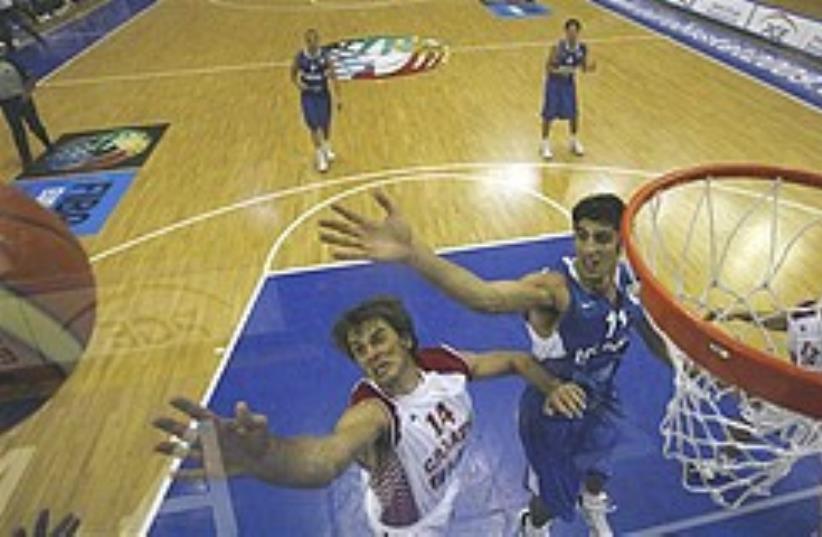 Lior Eliyahu fights for a ball with Croatia's Sand
(photo credit: AP)
Advertisement
Israel pushed Croatia all the way in itsEuroBasket opener on Monday, but was eventually edged 86-79 in Poznan,Poland by a superiorly talented team.

Lior Eliyahu fights for a...
Lior Eliyahu fights for a ball with Croatia's Sandro Nicevic.
Photo: AP
Despitestruggling in the first half, Israel trailed by just five points(42-37) at the break and surged into the lead in the third quarter. Thegame remained tight throughout the second half, but the Croats werebetter at the crucial moments.
The national team can not afford to lick its wounds for long ason Tuesday it faces Macedonia in a game which will likely determine ifit advances to the next round.
Three of the four teams in the group will progress to thesecond group stage, so a single victory against Macedonia could wellprove to be enough to ensure the side is still playing in the secondweek of the European Championships.
"We need to lift ourselves because this is adisappointing loss," coach Tzvika Sherf said. "The game againstMacedonia is nothing like the one against Croatia. We need to be readyand win the game in any way possible."
Lior Eliyahu was superb on Monday, hitting 13 of 17 shots onhis way to a career-best 31 points. Point guard Gal Mekel had anoutstanding debut, scoring 16 points and controlling Israel's offense.
IdoKozikaro and Tal Burstein added 12 and 10 points, respectively, but theteam was always going to struggle to win with Yotam Halperin scoringjust five points.
Former Maccabi Tel Aviv star Nikola Vujcic led Croatia with 21points, with guards Roko Ukic, Marko Popovic and Davor Kus each scoring13 points.
"We played well and made the Croats look bad," said Kozikaro.
"However, the better team won and we now need to focus on thegame against Macedonia. We knew this would be a key game and we mustwin it."
The Croats began the game with a hot hand from beyond the arcand led 6-0 within the first minute after two three-pointers. Kozikaro,who scored all his 12 points in the first half, was keeping Israel inthe game and one his baskets closed the gap to 11-8.
However, the national team paid a dear price for its poorrebounding and Nikola Vujcic's three-point move opened an 11 pointmargin (23-12).Croatia began to lose its scoring touch as the halfprogressed, but remained comfortably in front thanks to 13 offensiverebounds in the first two periods.
Six straight Eliyahu points, capped by an elegant dunk, broughtIsrael within four points (33-29), and despite its under par defenseand rebounding, Sherf's men were down by only five points at the break(42-37).
Halperin's three gave the team its first lead of the night early in the third (50-48) and Burstein's triple opened a 55-51 lead.
Vujcic came to his team's rescue when it needed him most, andhis 14th point of the night made sure the score was tied at 59-59entering the final period.
The lead traded hands at the beginning of the fourth quarter, with Eliyahu
andMekel the stars of the show for Israel. However, Marko Popovic wasunstoppable at the other end and maintained Croatia's slender leadthroughout the period.
Eliyahu edged the team within one possession with just under aminute to play (80-77), but that was as close as Israel would come andthe team will have to rebound from the loss when it plays Macedonia onTuesday.
Advertisement
Subscribe for our daily newsletter