A closer look at the IDF's field hospital for Syrian victims

Despite the fact that Israel and Syria are officially still at war, the IDF has treated hundreds of civil war victims, following ethical code.

By JPOST.COM STAFF
JANUARY 29, 2014 15:14
Soldiers in the IDF Medical Corps treat Syrian victims.
(photo credit: COURTESY IDF SPOKESMAN'S OFFICE)
Advertisement
Col. Tariff Bader, the senior medical officer of the IDF's Northern Command, shared stories from inside the field hospital treating Syrian refugees in an interview published on the IDF blog on Tuesday. The hospital on the in the Golan Heights' border with Syria was set up by the IDF last year to treat an increasing flow of wounded Syrian civilians. Many of these refugees are in such bad condition that they might not have time to be transferred to a civilian hospital for treatment. “When we realized we would be receiving many patients, we decided to build a field hospital so that we could treat people with serious injuries who require immediate care,” Col. Bader was quoted as saying. “The ethical code of the IDF Medical Corps clearly states that soldiers must assist anyone who is sick or wounded – whether they are associated with the enemy or not.”The field hospital includes surgery, radiology and orthopedic units. The IDF Medical Corps cooperates with Israeli civilian medical services for very serious cases. 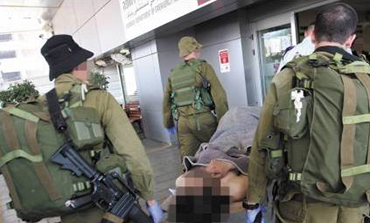 Soldiers treat Syrian civil war victim at field hospital.Soldiers often risk their lives to treat Syrian victims, as the location of the hospital makes it a potential target for either side of the Syrian conflict, the blog said. Mortar fire has wounded IDF soldiers in the area in the past.In order to protect the patients, whose time in Israel may put their lives in added danger upon return to Syria, "the IDF takes painstaking measures to remove any indication that they received care in Israel," the blog said. 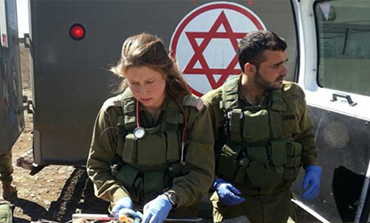 Soldiers prepare to treat Syrian victims at border.While the first Syrians who approached Israel for medical care were reportedly rebel fighters, there has been an increasing amount of women and children seeking care. "The injuries of children leave the greatest impact on me," Col. Bader said in the IDF blog. "I remember a girl whose femur was completely shattered. Had our forces not been there to help her, she would have died or been disabled for the rest of her life. I am honored to do this work, both as a physician and a citizen of Israel." In an attempt to ease the immense psychological trauma many patients have suffered, clowns visit the field hospital on a regular basis, particularly to entertain the children and put a smile on their faces.A total of over 500 Syrians have received treatment in Israel, with 40 percent being treated at the field hospital, according to an IDF Spokesperson. Ziv Medical Center in Safed has been the main site for civilian medical treatment, with at least 200 Syrian patients over the last year. Over the last three years the Syrian conflict has claimed the lives of at least 100,000 civilians, according to the United Nations.