This Week: Obama strives for Twitter perfection (but misses), Meghan McCain strikes back.

By NIV ELIS
MAY 29, 2012 13:21
Barack Obama Tweeting at computer 370
(photo credit: YouTube Screenshot)
Advertisement
It all began with a Tweet from US President Barack Obama.

Let's try this: After I speak here in Iowa about clean energy jobs, I'll answer a few questions on #CongressToDoList. Ask w/ #WHChat -bo
&mdash; The White House (@whitehouse) May 24, 2012

Yes, the most powerful man in the world was preparing to reach out to the people one-on-one. Though the White House has an active Twitter feed run by social media professionals, the president sometimes personally Tweets on the account using the abbreviated signature “-bo.”In holding an impromptu, town hall-style question and answer session on Twitter, Obama hoped to engage his constituents directly. What better way to address real people and their concerns, to show that you are a receptive candidate who pays attention to what people outside the Beltway have to say, than to converse with the masses via Twitter?Over the course of about 20 minutes, Obama answered seven tweets from a variety of users, using the opportunity to highlight his #CongressToDoList and tout his record thus far.Then, he reached for Twitter perfection: the Twoosh. For those not in the Twitter know, a Twoosh is a Tweet that perfectly fits the 140-character limit.Tweet of the Week:

Obama was so pleased with his perfect Tweet, he went as far as to dub himself a "Twoosh Master." (Skip to 4:38)Viral Video of the Week:
But there was just one problem: The whole event was, as campaign events are wont to be, highly produced, planned and staged. As the good people at The Atlantic noted, the Tweets Obama responded to were sent out hours before his initial call for questions (probably responding to a an earlier, preparatory call for questions by the White House pros), and likely hand-picked ahead of time with ready-made responses.  And the Twoosh?Well, it seems that it was artificially made to appear 140 characters long for the video, employing extra space at the end and in the middle, specifically so the audience could see “0" characters remaining on the screen in the video of the Tweet session. 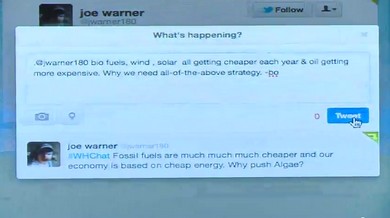 Twoosh? Not really.Meanwhile, the Republican National Committee was focusing its efforts on a smaller, but still significant number: 14. That’s the number of Democrats they counted who “mutinied” against the Obama campaign’s attacks on Bain Capital, the private equity firm that Republican Mitt Romney used to run.  But while Romney (expected to finally pass the delegate threshold to become his party's nominee on Tuesday when he wins the Texas primary) kept focus on the campaign, the GOP was pulled into the wrath of the Twitter-verse by their party’s far-right camp.Meghan McCain, moderate Republican and daughter of 2008 US presidential candidate Senator John McCain, found herself at the center of some nasty Twitter attacks after questioning the extreme wing of the party. After telling MSNBC that she doesn’t “understand the popularity of Michelle Malkin and [the late] Andrew Breitbart,” both uber-conservative figures, Twitter took off with negative attacks against her with an unfortunate, sexist bent.

@greggutfeld Breitbart had more class in his pinky finger than @McCainBlogette has in her entire 4 foot, 300 lb body.
&mdash; Levin Inches™ (@LevinInches) May 25, 2012

If @mccainblogette's daddy wasn't a senator she'd be a pole dancer in Phoenix.
&mdash; Eric Praline (@Eric_Praline) May 25, 2012

@McCainBlogette probably just missed snack time. We know how she gets when she misses snack time!!!
&mdash; Brian Ellis (@WSPanictime) May 25, 2012

In a column for The Daily Beast, McCain responded to her critics resolutely, expressing dismay at the incivility of the reactions.“When people don’t like my politics, I am happy to have a political discussion with them. But when they don’t like my politics and call me fat and say I should die, what’s left to say?” she wrote.Very little, indeed.  Not even enough to fill a perfect 140-character Twoosh.#USelections2012 offers weekly insight into the US Presidential election through a social media lens, tracking candidates as they try to reach 270 electoral votes in 140 characters or less.The writer is a Breaking News editor and blogger at The Jerusalem Post. Read his blog ‘The Bottom Line’ here.