Visit Bethlehem and sample the best of the biblical city over the course of one day.

By LAURA NICHOLS
Church of the Nativity
(photo credit: Laura Nichols)
Advertisement
For further information on Christian tourism and Holy Land Tours to Israel contact Traveluja.Bethlehem is more than just the birthplace of Jesus Christ and a destination for Christian pilgrims. The city is a living, breathing piece of history both ancient and modern. Biblical architecture that spans eras is placed side by side with modern constructions resulting from decades of conflict between Israelis and Palestinians. Bethlehem's small size make it easy to walk around and, contrary to salacious headlines, the city is relatively peaceful and an important destination not to be missed.GETTING IN AND GETTING OUTA quick Google search explains getting into Bethlehem is immensely easier than trying to compromise on a two-state solution. The Jerusalem light-rail runs along Jaffa road for NIS 6.60 to the Damascus gate stop. When you exit the train the Arab bus station is behind you. The number 21 bus runs every 15 minutes and is NIS 7.60. The bus ride takes around 30-40 minutes and makes around 3 stops before it alights at the Bab al-Zqaq stop along the Jerusalem-Hebron Road in Bethlehem. From here, most main centers are walking distance but taxis are lined up with negotiable prices.To leave Bethlehem to return to Jerusalem, take the same number 21 bus, on the same side of the street where you originally got off. If you're nervous about the direction of the route, just double check with the driver that he is heading back to Jerusalem, he'll say yes. The only difference on the ride back to Jerusalem is a stop at an IDF checkpoint. Sometimes the bus overcrowds with passengers standing and when the bus stops at the checkpoint, these passengers must get off and stand outside so a soldier can come on and check ID's. Make sure to have your passport, the process is quick and painless and there is no reason to feel scared.BETHLEHEM ACCOMMODATIONSCouchsurfing.com is a great way to meet expats or locals living in Bethlehem. Registration on the site is free and you can peruse profiles and send messages to potential hosts. People offer up couch space or spare rooms for free to backpackers or anyone traveling through. The community in Bethlehem is small and most of the couch surfers know each other. It's not uncommon to meet someone you had previously emailed with while staying at the house of another host.On the other side of the price spectrum, the five star Jacir Palace, part of the Intercontinental Hotel chain, is only a five-minute walk from the Bab al-Zqaq bus stop and it is the lap of luxury. Rooms start from around $140. Even if you're not staying there it is worth a moment to explore the building. The palace dates back to 1910 and the Palestinian Jacir family. In renovations and decoration, great care was taken in the furnishings and interior décor to reflect this time period. The impressive façade rises above the Jerusalem-Hebron road and one could easily mistake it for a museum if not for the "Intercontinental" signage on the front.BETHLEHEM SITES TO SEEManger Square is the reason to visit Bethlehem with the Church of the Nativity its center point. Church fatigue, exhaustion resulting from numerous trips inside holy houses of Christianity, is a common affliction. But it's worth rising above to explore this historical site. The basilica was commissioned under the rule of Constantine in 327 AD and was built on the site believed to be where Mary gave birth to Jesus. The crypt is accessible through the church and during the Christmas season, pilgrims gather en-masse for the chance to experience such divinity. It is deceptively massive, a combination of the original Basilica and the more modern era Roman-Catholic Church of St. Catherine. The holy site impresses upon the visitor a curious mix of modesty, in comparison to European Cathedrals, but an intangible sense of greatness in the scope of its sheer history.Another not-miss sight is the Milk Grotto church. The entrance descends into a renovated hollowed out cave dating back to the Crusades. The story goes that the Virgin Mary hid in this cave to flee the massacre of the male children of Bethlehem ordered by King Herod. While nursing her newborn child, a drop of her milk fell on the rock she was sitting on and became a source of many miracles. The unique space is impressive enough just by virtue of its architecture and design. Marble pillars rise up into the natural arc of the cave. Tourists kneel in front of altars dedicated to the Virgin mother and kiss her portrait.Walking through an alley out of Manger Square, many steps lead up and into the Old City of Bethlehem. Here, a new-age market has evolved in an ancient surrounding. The souvenir shops, fashion stores and housewares are for sale. An unspoken evolution of the needs of Bethlehem's community is reflected in the goods but bakeries, fresh falafel and the fruit and vegetable market are as necessary today as they were in Biblical times. 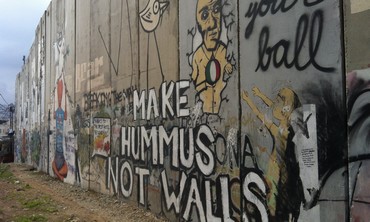 The separation barrier, the contested concrete wall dividing Israel and the West Bank, is a short walk from the Jacir Palace and is as much a border marker as a canvas for political art. One of the walls most famous visiting artists was anonymous British guerilla stencil-artist, Banksy. Visiting the West Bank in 2005, Banksy created nine murals based on some of his most popular and notable sketches. Arrows and advertising on the wall point to the "Banksy giftshop" where prints can be purchased and a registered tour guide also offers up his service to point out some of the famed murals. On the Bethlehem side of the wall it is hard to tell if any original Banksy's remain but other contributions make the wall an impressive and moving site. Additionally, an initiative to publish first hand stories by Palestinian women hang on the northern side of the wall. According to one of the posters, the stories were chosen to reflect suffering, oppression, inner strength and steadfastness. An anecdote posted by Banksy on his website said that a Palestinian man approached him and told him his art made the wall look beautiful. When Banksy thanked the man he replied, "We don't want it to be beautiful, we hate this wall. Go home." BETHLEHEM PLACES TO EATCafes and restaurants are plentiful along main boulevards in Bethlehem but street food and small snacks allow for eating and sight seeing in a short time span. For coffee on the go, the Stars and Bucks café looks eerily similar to another popular North American coffee chain. Ice cream is in the display case and all major styles of caffeinated drinks are made and travel ready. Even a simple cup of black coffee is dressed up with whole coffee beans dropped in. It's worth it to patronize this coffee spot if only to acknowledge Palestinian entrepreneurship. The familiar green and white logo is hard to miss on the road up to Manger Square. 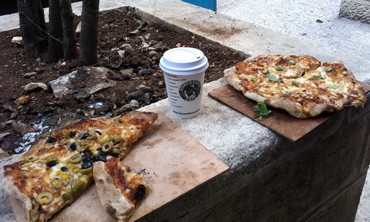 While site seeing in the bazaar of the old city, meals can be grabbed on the go from fruit and vegetables stand, fresh pita and falafel or even a personal pizza. Across from the Syrian Orthodox Church in the Old City a stand alone oven bakes fresh pizza for NIS 10. Without any instruction the pizza comes with a heap of green and black olives or can be made margarita style if specified. Tea is hocked through the streets and its fun to sit and enjoy while people watching. 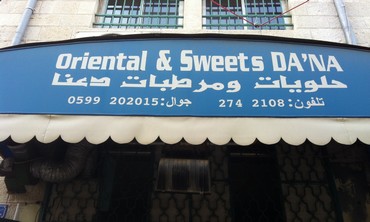 If you're more in the mood for something sweet, the small café of Oriental & Sweets DA'NA serves up quality pastries, coffee and tea in unpretentious settings. The café capitalizes on its prime location just steps away from Manger Square but it's a popular spot for locals and tourists alike. Trays line the counter with any and all sugar soaked philo dough pastries. The most important pastry to order is Kanafeh. The traditional Palestinian cheese pastry originated in the city of Nablus and is traditional Middle Eastern white brine cheese sandwiched between layers of philo dough and soaked in sugary syrup. A traditional cup of Arabic coffee with cardamom completes the Levant dish.Whether a short, tourist stay or religious pilgrimage, Bethlehem is an important city both historically and in present day. It is a worthwhile visit at any time of year.

Laura Nichols is contributing writer to Travelujah-Holy Land tours, the leading Christian social network focused on travel to the Holy Land. People can learn, plan and share their Holy Land tour and travel experiences on Travelujah.
Advertisement
Subscribe for our daily newsletter