A hop, skip and a jump into the past

A number of fascinating historical sites such as Tel Arad, Tel Afek and Herodion are closer than you might think.

By JOHN BENZAQUEN
Avdat
(photo credit: Courtesy)
Advertisement
How many New Yorkers have visited the Empire State Building or how many Romans have actually visited the Coliseum? Not many.For them, these landmarks are part of their ordinary lives, and very few take the time to visit them as tourists.The same holds true of Israel. Our country is filled with historical sites and monuments, yet few Israelis take the time to visit them.Israel is a small country, thus most major sites are not very far from the centers of population. So set some time aside to see some of the many historical sites in Israel, such as the ruins of the Nabatean city of Avdat in the Negev or the remains of the old Israelite city of Tel Arad with its temple and holy of holies modeled after the First Temple in Jerusalem.Other places of interest are the Crusader fortress of Belvoir overlooking the Jordan Valley; the fortress of Nimrod built to block the expansion of the Crusader kingdom; and Beit She’an, Israel’s Pompeii. All these places are not difficult to reach and are well worth a visit.The following sites have been declared national parks and are maintained by the Israel Nature and National Parks Protection Authority.The opening hours are from 8 a.m. to 4 p.m.Tel Arad, a glimpse of what the first temple looked like 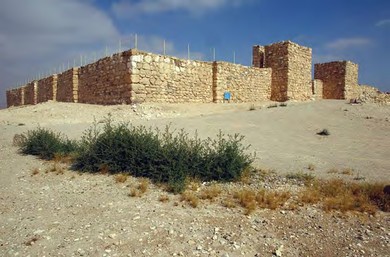 Tel Arad (Courtesy)
Tel Arad is a 10- to 15-minute drive from the modern city of Arad, which is named after its urban predecessor. This is the very well-preserved site of a city that was inhabited by the Canaanites more than 5,000 years ago. The city was founded circa 3150 BCE and was inhabited by the Canaanites until 2200 BCE, when it was occupied by the Israelites.It was one of the most important urban centers in Canaan, as evidenced by its long walls, well-planned streets, water collecting methods, etc. The city was divided into a lower and an upper city. The lower city was abandoned during the Israelite period. At that period, the urban hub was centered in the upper city, with its castle and temple. During the Israelite period, the city of Arad was much smaller than it was during the Canaanite period.Nevertheless, it was a major strong point, a well-fortified city of the Israelite and Judean kingdom.In the courtyard of the castle is a temple modeled on the Solomonic Temple in Jerusalem. In those times, there were such temples all over the country, and each one had its holy of holies. Some religious Jews do not enter the temple for fear of treading on and desecrating sacred soil.How to get there: Drive to the Tel Aviv-Beersheba highway (Route 40), turn left at the Lahavim Junction and onto the road to Arad. At the Shoket Junction, turn north and drive for another two kilometers.Recommended length of visit: One and a half hours.Admission: Adults NIS 12; children NIS 6. Groups: NIS 11 per adult; NIS 5 per child.Tel Afek, the citadel that David built 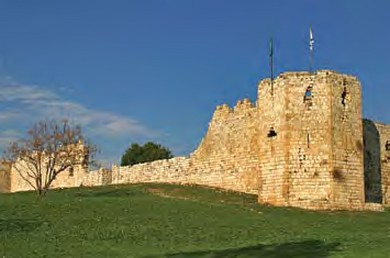 Tel Afek (Courtesy)
When King David defeated the Philistines in Afek in the 11th century BCE, he had a citadel built on the site. It commanded an important part of the Via Maris, the ancient main route from Egypt to Damascus. After the destruction of the First Temple, the citadel was abandoned.Much later, the city was rebuilt by Herod and named Antipatris. The remains of this city are on view, as well as the remains of a fine Turkish fortress called Biner Bashi. This fortress had a view of the surrounding area and commanded the source of the Yarkon River. The headwaters of the Yarkon are now used for irrigation, but 50 years ago it was the main source of fresh water for that rich agricultural region.How to get there: It is located near the end of the road from Petah Tikvah to Rosh Ha’ayin.Recommended length of visit: Two hours Admission: Adults NIS 23; children NIS 12. Groups: NIS 19 per adult; NIS 11 per child.Herodion, the palace fortress that Herod built Herodion is one of the most fascinating structures of the ancient world in existence. It combined the functions of a palace and a fortress. Built by King Herod just outside Bethlehem, it is an artificial hill with massive walls around it, with Herod’s palace at the center. It had large public rooms, private rooms, bathrooms, etc.Outside the walls were lush gardens and a swimming pool. Since the area around Herodion is arid, water was brought in via pipes and over an aqueduct.This structure, started in 22 BCE, took seven years to build. According to legend, Herod intended it as his burial ground.How to get there: From Jerusalem’s Gilo Junction, take Highway No. 356 past Har Homa and the settlements of Nokdim and Tekoa and from there to Herodion.Recommended length of visit: Up to two hours.Admission: Adults NIS 23; children NIS 12. Groups: NIS 19 per adult; NIS 11 per child.Beit She’an, the local Pompeii Well, not exactly Pompeii, since the city was not destroyed by a volcanic eruption but an earthquake. However, it is very well preserved.Like Megiddo, Beit She’an was a center of Egyptian rule in the area. Its importance was in its strategic location overlooking the Jordan Valley and the rich agricultural land around it.But the fame of Beit She’an is due to its Hellenistic heritage. After the conquests of Alexander the Great, the area around Beit She’an was resettled by Greeks, who founded a city state and called it Scythopolis- Nysa. The city flourished and later was part of the confederation called the Decapolis, a grouping of 10 Hellenistic city-states in the region.The remains of the city attest to its former glory. Temples, an amphitheater, bath houses and luxurious dwellings are evidence of one of the great cities of the Ancient Middle East.How to get there: Drive to the city of Beit She’an.Recommended length of visit: At least half a day.Admission: Adults NIS 23; children NIS 12. Groups: NIS 19 per adult; NIS 11 per child.The Nabatean cities of the Negev The Nabatean city of Petra in Jordan is internationally renowned. The three lesser-known Nabatean cities within Israel are Avdat, Mamshit and Shivta.Avdat, watchdog of the Spice Route 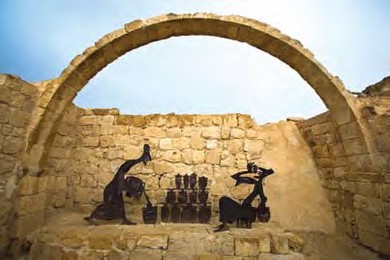 Avdat (Courtesy)
Avdat is the largest Nabatean city in Israel. It is located on the Spice Route, the route taken by the caravans of the ancients to transport spices and essence collected from Arabia at the commercial entrepot of Petra to the port of Gaza for export to Greece, Rome and Egypt. Such a rich and important commercial city had to be well defended. Its acropolis on the hills above the city is proof of its strategic importance and its attraction to predators, mainly Beduin.The city had many ups and downs, which is reflected in its architecture. Its prosperity was founded on the transfer of goods from Arabia to Gaza and vice versa. When Gaza fell to the Hasmonean Alexander Janneus, trade decreased dramatically. But it received a big influx of refugees from Gaza and began to recover.The city itself survived the fall of the Nabatean Kingdom when it was captured by the Romans. It remained a major desert urban center until it was captured and destroyed by the Arabs.Not much is left of the town itself, although the remains of the Nabatean temple and houses and public buildings are proof of its past power and prosperity. The best-preserved part of Avdat is the acropolis, or castle, 650 meters above sea level, with spectacular views all around.The Nabateans were experts in growing food in the desert. Adjacent to the site is a large farm that uses Nabatean agricultural techniques of irrigation sowing and reaping to this day, with very successful yields.At the visitors’ center, the city and the Spice Route are brought to life. There is also a shop that sells snacks and souvenirs.How to get there: Drive to the Beersheba-Mizpe Ramon road (Route 40), some 10 kilometers past Kibbutz Sde Boker, and turn left. The site is on a prominent hilltop.Recommended length of visit: 2 hours.Admission: Adults NIS 23; children NIS 12. Groups: NIS 19 per adult; NIS 11 per child.Mamshit, the birthplace of the Arab horse The Nabatean city of Mamshit (Memphis in English) is the smallest but bestpreserved Nabatean city in the Negev. Like Avdat, it was an important trading center and sat on the trade route from Arabia and the Idumean Mountains to Hebron and onwards to Jerusalem, Samaria and Damascus.Despite the fact that trade waned after the Roman conquest of Nabatea, Mamshit prospered due to the breeding of horses. The world-famous Arabian strain were first raised in Mamshit. Later, its prosperity was based on its location as a frontier town of the Byzantine Empire. But when the influence and power of Byzantium declined and funding ran out, the city quickly declined and was abandoned.How to get there: Drive along the Beersheba-Dimona road (Route 25). Drive eight kilometers in the direction of the Rotem Industrial Park and turn right just before reaching the junction.Recommended length of visit: Two hours.Admission: Adults NIS 12; children NIS 6. Groups: NIS 11 per adult; NIS 5 per child.Shivta, growing food in the desert The Nabatean city of Shivta differs from other Nabatean towns in that it was not a commercial center, did not lie astride a trade route, and it was not fortified.Archeologists believe it was agricultural in nature, with fields all around it.This is surprising, since it is located in one of the driest areas of the Negev Desert.But the Nabateans were experts in desert agriculture, and the town is a model of careful town planning, with well-designed streets and water recovery systems.How to get there: Go to the Beersheba-Mizpe Ramon highway (Route 40) and continue to the Telafim Junction, Route 211. At the junction near the gas station, turn south and drive for another 10 kilometers.Recommended length of visit: One hour.Admission: None.Follow @JPost_Lifestyle
Advertisement
Subscribe for our daily newsletter