All Out Adventure: Hayarkon Park, TA and beyond

A new column: Explore some of the country’s best hiking options with tips on how to make the most of your visit.

By TOURISTISRAEL.COM STAFF
Hayarkon Park 390
(photo credit: TouristIsrael.com)
Advertisement
Tourist Israel is Israel’s "cool" travel guide.Hayarkon Park is Tel Aviv’s “green lung.” An oasis of lush nature,this hike is, in places, along paved footpaths, while in others along walking trails. It stretches from the coast at the mouth of the Yarkon River, inland along its banks, all the way to the river source, near Petah Tikva. It is therefore accessible for the whole family and can vary in length from just a short walk to a whole day’s hiking.To walk the whole length of the Yarkon, park at the Tel Aviv Port and head north along the seafront until you reach the mouth of the river. Here, turn right, and enter the park which, at this point is a relatively narrow stretch of greenery on either side of the river. As you head inland, you will soon pass the beautiful Daniel Amichai Center for Rowing and Nautical Studies, an incredibly impressive building which was actually designed as an upturned boat. You might take a short break here and watch the rowers power through the calm waters of the Yarkon. 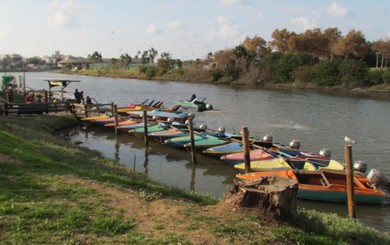 Boats moored in the Hayarkon (TouristIsrael.com)
Continuing along the paved pathways, you will be passed by the many runners, bikers and dog-walkers that use the park on a daily basis, seeing sports pitches, activity classes, and the odd boat moored up on the banks of the river. Hayarkon Park is definitely an urban park at this point. Yet, as the water glistens with the beautiful light that passes through the tall reeds and shaded blanket of trees which overhang, you might be forgiven for thinking you are far, far away from the city.Passing under the bridges of the main north-south arterial routes of the Dan Region, Route 2 and then Route 20, the park widens significantly providing a few options.  After passing the point where the Ayalon River meets the Yarkon, and passing under Route 20 (Ayalon Freeway), you could turn right and follow the path of the Ayalon River before looping back, or alternatively, continue to follow the Yarkon River, bearing left, and exploring some of the gardens within the park which include the tropical garden, rock garden, cactus garden, and rose garden. There is also a water park and bird park – perfect if you are with kids! 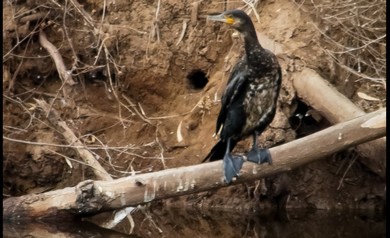 Bird sits on the banks of the Hayarkon (Flavio Grynszpan)
If you are interested in continuing out of the "easy hiking territory" continue to follow the course of the river and the paths will become gravel, hiking trails. These trails continue alongside the river under the major roads (Mivtsa Kadesh, Route 4, Route 5 and Route 40) all the way to the source of the river, between Petah Tikva, and Rosh Ha'ayin. Here the river falls into the territory of the Yarkon and Tel Afek National Park, managed by the Israel Parks Authority, and an entry fee is required to enter. This is a walk that could be anything from an hour’s stroll in the park with the kids, to a full day’s hike or more. There are parking lots along the route so it is possible to start at an alternative point or to park one car at the end point and continue in another car to the start point so you do not have to return the same way. Information and opening hours   -Opening hours and fees vary for attractions within Yarkon Park, although the majority of the trail is free to enter. Contact [email protected] or 03-6422828.-The Yarkon and Tel Afek National Park (03) 934-8462) is open 8 a.m. till 5 p.m. April to September, and 8 a.m. till 4 p.m. October and March. NIS 27 for adults, NIS 14 for children, and 50 percent discount Israeli senior citizens.- Overnight camping at the park costs NIS 50 per adult and NIS 40 per child (03-9348462).-To get to Tel Aviv Port (Namal Tel Aviv) from Road 2 or the Ayalon Freeway, take the junction with Sderot Rokah towards the sea. You’ll pass over the river, and turn a sharp bend to the left, and the entrance to the Port is on the right hand side, just after the road becomes Hayarkon Street. Within the compound are large parking lots where you can leave your car.Tourist Israel provides ideas for what to do in Israel, Israel tours, hotels in Israel, and events. It aims to be a resource for everyone whether they are planning their first visit to Israel or are a seasoned resident.