Off the Beaten Track: A geological wonder

Spring offers optimal trekking and camping conditions in the Negev southlands, including the Small Maktesh.

Small Maktesh 370
(photo credit: Joe Yudin)
Advertisement
Joe Yudin owns Touring Israel, a company that specializes in “Lifestyle” tours of Israel.One of my favorite things about Israel is the vast diversity of climate and landscape in such a small area. Where else in the world can you ski at 6,000 feet in below freezing weather, effortlessly float in a salty lake below sea level with the sun warmly shinning down upon you and then scuba dive in some of the best coral conditions in the world all in the same day without getting on a plane?I know it would be tough to do all in one day, but it is possible, and very easily done in three days. Springtime in Israel offers a plethora of hiking options, from the rushing waters of the streams and rivers in the Golan, beautiful flower covered hills and valleys in the Galilee, to some warm weather (not scorching hot) desert hikes in the Biblical wilderness. If you have a few days, April and May offer optimal trekking and camping conditions in the Negev southlands.You’ll need two cars for this half day, intermediate hike around the Small Maktesh area unless you plan to camp out, in which case you can extend this hike to two days. If you have an off-road vehicle, the area offers a plethora of options. Just make sure to stick to the off-road marked trails. There is a great app for the iPhone or iPad in Hebrew called Amud Annan, which will feed you your GPS coordinates and updated marked trail maps in real time, plus peoples comments at specific sites along the way. 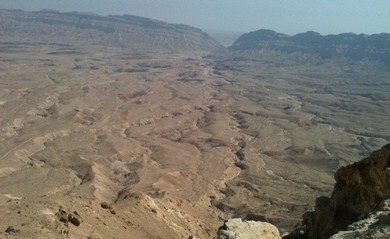 Photo: Joe Yudin
From Dimona take Route 25 east to Rotem Junction and then turn right going south on road 206. Turn left at the next major junction about 10 km down the road east on road 227. Travel another 10 km until the road intersects with the multi-colored Israel Trail and turn left onto an unpaved road and park a car in the overnight lot. Return the way you came all the way to Rotem Junction and turn right going east on Route 25. Take this road about 18km to an unmarked semi-paved road which will be on your right. It’s just after the really curvy part of Route 25 and just before it straightens out to Route 90. Take this road to the night parking lot by the red trail. If you are doing a two day excursion you will return to this spot, so take your camping gear with you.Follow the red marked trail into Wadi Hatzera which drains the entire Small Maktesh. When it rains in this area it pours and you don’t want to be hiking through a canyon during a flash flood. This point of the maktesh (crater-like feature) becomes a roaring river during a flash flood. Imagine a flash flood emptying a 5km by 7km crater-like formation roaring through a smaller exit. Huge boulders and stones would be crushed at this point, and it has earned the name “Satan’s Mouth." The walls of the canyon here are high and the millions of years of erosion are layered on the walls of the formation. The views from here are spectacular. Follow the red trail all the way to the far side of the maktesh. 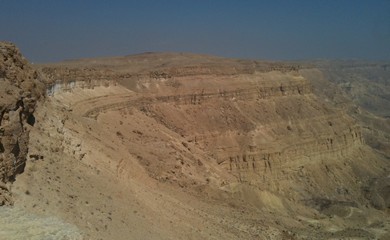 Photo: Joe Yudin
This is the smallest of the first three makteshim (plural form of maktesh) discovered in the world. Today five are known in Israel, two in the Sinai, Egypt and other possible makteshim are being studied, but this subject remains controversial. These incredible formations are commonly referred to as craters although that is a misnomer. Craters are formed by impacts; these geological formations are formed over hundreds of millions of years by erosion.  A mountain was pushed up through the sea which covered this area in a bygone age. As the sea receded and the peak of the mountain poked out above the surface, the waves lapped off the hard surface of the mountain peak creating a mountain top lake which ate away at the soft limestone core. This eventually broke through the wall, creating Satan’s Mouth millions of years after the disappearance of the sea, draining the lake, and collapsing the wall of the maktesh. It’s truly a geological wonder.About three and a half to four kilometers into the maktesh you'll come to a unique multicolored sandstone formation which is a great place to crush some of the stones and fill up a small glass or plastic bottles with the sand if there is an artist among you. Continue on the red trail for another one and half to two kilometers and you will start a slow climb of the southwestern wall of the maktesh, which turns into a steep incline. This is the exit of the maktesh and is called Eli’s Ascent, named after Eli Ben Tzvi. Ben Tzvi was a Palmah commander and son of Israel’s second president, Yitzchak Ben Tzvi. Eli was injured (or suffered heatstroke) in the maktesh during a training accident and evacuated up this accent. Later during the War of Independence he was killed in action. 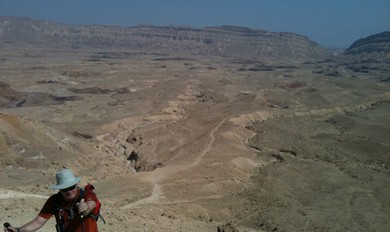 Photo: Joe Yudin
There are many prehistoric fossils and pieces of flint and other fascinating stones up this steep ascent, so keep an eye out for them. Also keep an eye out for Egyptian Vultures which circle above. Be careful on some of the steep parts and make sure to use the handles and railings while maneuvering up the cliff.The view from the very top of Eli’s Ascent is truly breathtaking. Looking back at the maktesh, one can see how the streambed drained the ancient lake out to the east. Today the floods run in the same direction into the Arava Valley and down to the Dead Sea. The shape of the maktesh is like a giant soup bowl. This is a perfect spot to break out the picnic baskets and coffee kits. From here, it’s two kilometers on the same path to your dropped off car or the campgrounds. If you choose to stay the night, a fabulous hike for the next day would be the nearby Scorpion’s Ascent loop trail.Joe Yudin became a licensed tour guide in 1999. He completed his Master’s degree at the University of Haifa in the Land of Israel Studies and is currently studying toward a PhD.