Off the Beaten Track: Celebrating Sylvester in Caesarea

Instead of hitting the bars in the big city why not learn about the history of New Year's Day among ancient ruins.

By JOE YUDIN
DECEMBER 29, 2011 16:16
Caesarea 311
(photo credit: Doron Nissim/INPA)
Advertisement
Joe Yudin owns Touring Israel, a company that specializes in “Lifestyle” tours of Israel.When I first moved to Israel in 1990, New Year's Eve was hardly celebrated. Growing up in the United States it didn't matter if you were a Jew, Christian or whatever, New Year's Eve meant it was time for a party and New Year's Day meant a late wake up, Bloody Mary's with brunch and of course a full day of college football. So the volunteers on the kibbutz we were working on, together with the Russian immigrants, all fresh arrivals that autumn, pitched in their funds and bought a whole lot of booze. When the manager of the kibbutz Hebrew study program, Rafi, got wind of our little shindig, he approached me with an issue that I didn’t quite understand."Joe, I heard that you are throwing a Sylvester party, is this true?" he asked."Sylvester?" I responded. "Isn't that the cat who is always trying to eat Tweety Bird?" I said, really not knowing what he was talking about but also being a smart-mouthed recent college graduate as well. "No. Sylvester is what we call New Year's Eve here in Israel. It has always been a horrible night for the Jews," he responded.With that statement Rafi walked away. I shrugged and didn't think much of it. We had our 1991 New Year's Eve party, and of course no one showed up for work or class the next morning. Little did I know that two weeks later 95 percent of the students would run abroad as Saddam Hussein began lobbing scud missiles into Israel. I found myself night after night in a sealed room, gas mask affixed to my face, surrounded by Israelis and Russian immigrants alike. For the next twenty years as more and more Russians immigrated to Israel, did "Sylvester's New Year's" start to become celebrated as a party as the older veteran Israeli generation would shake their heads in disbelief and disgust. I didn't understand why so I did a little research on the origins of New Year's and why some Jews think we should shun all celebration of this day. In the year 46 BCE, Julius Caesar introduced the solar based "Julian calendar" and established December 25 as the Winter Solstice and the "Saturnalia" celebrations, with January 1 as the beginning of his New Year. His reason for adjusting his new calendar was to reaffix the seasons to their proper months. The old calendar over time had become inaccurate and out of sync. The Romans began to make sacrifices to the god Janus, the two faced god who looked back into the past and forward into the future. They also gave gifts of coins and fruit, later feasts and costume parties were held to celebrate the New Year. 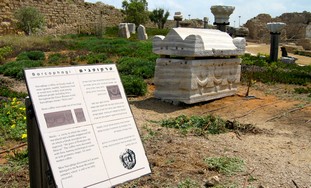 Caesarea ruinsJulius Caesar was honored by the Jews and the New Year that he reigned in did not affect their religious rights as they continued to count their calendar according to the Torah. Julius allowed the Temple to be restored to its sanctity, and the rebuilding of Jerusalem and Jaffa after Pompey's military foray into Judea. Julius Caesar indeed allowed the Jews religious freedom and autonomy, revoking Pompey's harsh decrees and lowering taxes. Julius certainly was honored by the Jews . Only after Caesar's assassination and Herod's ascension to the throne did the Jews’ luck begin to change. Herod took power by force through a bloody civil war and only later started to rebuild the Land of Israel.After the movement by Emperor Constantine away from paganism and towards Christianity after the Council of Nicaea in 325 CE, the end of December and beginning of January began to take on a new meaning. Pope Sylvester was reigning at the time and tradition holds that he convinced Constantine to ban Jews from living in Jerusalem. Christmas celebrations replaced the Saturnalia feasts and the Feast of the Savior’s Circumcision replaced the sacrifice to Janus in some Christian circles. Each Saint was also assigned a day to be honored and Sylvester was assigned to December 31 hence "New Year's Eve" is called the celebration of "Sylvester". Throughout the history of Christian Europe, Saint Sylvester Eve or New Year's Eve became a night of drunken celebration followed by anti-Jewish legislation and even riots aimed at the Jews. With all this in mind it is no surprise that the elder statesmen of Israel, whose parents and grandparents remember the times in Europe when it wasn't safe to be Jewish on New Year's Eve, would be shocked to find Israel's youth celebrating this holiday in western fashion. I suggest that if we are going to recognize this holiday, perhaps it’s best for us to shun the drunkenness associated with the European pogroms and instead visit the ruins of Caesarea, built by Herod the Great in honor of Augustus Caesar, the adopted son of Julius Caesar, who established January 1 as the start of the New Year, and did reestablish Jewish rights in the Land of Israel. The choice is yours. 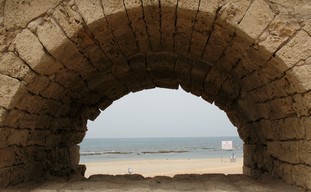 CaesareaJoe Yudin became a licensed tour guide in 1999. He completed his Master’s degree at the University of Haifa in the Land  of Israel Studies and is currently studying toward a PhD