Off the Beaten Track: Cooling off near the Kinneret

While the temperatures are just too hot for a full day of sightseeing, the Majrasse Stream is a great alternative for all the family.

By JOE YUDIN
JULY 19, 2012 15:59
Majrasse
(photo credit: Joe Yudin)
Advertisement
Joe Yudin owns Touring Israel, a company that specializes in “Lifestyle” tours of Israel.Waking up at the beautiful Scots Hotel in Tiberias is such a treat. This converted 19th century Scottish hospital on the shores of Lake Kinneret (Sea of Galilee) offers spectacular views from its antique style black stone edifice and exquisite balconies. The non-kosher breakfast offers everything from bacon and eggs to boutique cheeses, salads and fish. The problem is when you walk out the door on a hot summer day as my tourists and I had done just this past week during a brutal heat wave.“Oh its hot!” said my tourist as we get slapped with close to record heat and humidity.“Yes that’s your punishment for visiting Israel in the summer.” I said. “You really need to come in late winter or throughout spring. It’s a whole other country.”
Our agenda called for Beth Shean, Beit Alpha and Belvior Castle but being that it was close to 33  degrees at 9a.m. in the morning I thought that the itinerary was in need of a drastic change.“I suggest you take your family back to your room, change into bathing suits and shoes for walking in water, it’s just too hot for your typical touring today,” I warned.“Sounds good to me” said the father, “but keep in mind we have a five and seven year old so keep it easy.” 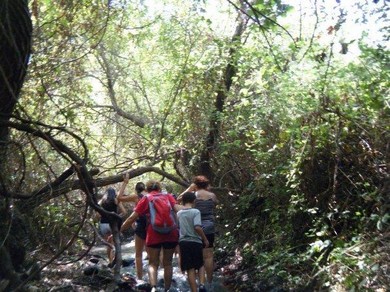 Majrasse stream (Joe Yudin)From Tiberias we took Route 90 north along Lake Kinneret. At Kfar Nahum Junction we turned right onto Route 87 and we began to pass some of the most inspiring sites for the Christian traveler, which also have much to offer any tourist. To our right,we had the Church of the Miracle of Loaves and Fish, which boasts a beautiful byzantine mosaic inside the now modern church depicting symbols of Jesus feeding of the 5,000. To our left was the Mount of Beatitudes, high above the nearby kibbutz banana fields, where Jesus gave his Sermon on the Mount, his core teachings. Next, the Primacy of Peter Church was on our right, the site where Jesus revealed himself to Peter after the resurrection, one of the most spiritual and serene spots for the Christian pilgrim.Not far down the road we passed Kfar Nahum, or Capernaum, which was a Jewish fishing village in the first century. This site visited mostly by Christians is actually one of the best preserved Jewish villages in Israel from the time of the Second Temple period through the Talmudic period. Its 4th century, the white limestone CE synagogue stood out among all the black, basalt houses and is built over an earlier synagogue. A modern church is built over several layers of earlier churches built over the purported house of St. Peter. The new church is built on stilts so you can see the layers of ruins below. We passed over the Jordan River and were soon on land captured from Syria in 1967 and we entered the Golan Heights. We soon made a right at Yehudiya Junction onto Route 92 and after about seven kilometers we came to MaaleGamla Junction. We made a right heading towards the lake and the paved road eventually ended and turned into a blue trail marked dirt road. We followed the signs to the Majrasse Stream and eventually we parked in a lot by a shaded picnic area with bathrooms, a kiosk and park rangers. We applied our all-important sunscreen, blew up the floaties for the five year old and filled up our water bottles before setting out in search of the trail. 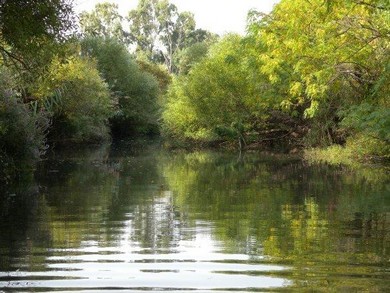 Majrasse stream (Joe Yudin)Most of this short, but wet trail is inside the water and most adults will be able to walk the entire distance inside the water. Younger children will need to swim, float or ride their parents backs. The streams of the Golan Heights that haven’t been dammed flow into Lake Kinneret here and this why it is a nature reserve. The ecosystem here is very delicate and many of the species of fish that once thrived here died out before the park became a protected reserve. Signs at the beginning of the trail will explain (in Hebrew) what kinds of animals once lived here and which ones still do. The flora and fauna are exquisite year round and the beginning of the trail will remind you of a jungle. At the end of your adventure inside the stream there are signs warning of an estuary, a breeding ground for fish, ahead of you. Please do not enter this area but enjoy the rather large pool and go for a swim before exiting the stream and walking back to your car through the giant eucalyptus wooded area.
Joe Yudin became a licensed tour guide in 1999. He completed his Master’s degree at the University of Haifa in the Land  of Israel Studies and is currently studying toward a PhD.Follow @JPost_Lifestyle
Advertisement
Subscribe for our daily newsletter