Off the Beaten Track: Hiking the Negev wilderness

By JOE YUDIN
OCTOBER 27, 2011 23:58
Negev animals 311
(photo credit: Joe Yudin)
Advertisement
Joe Yudin owns Touring Israel, a company that specializes in “Lifestyle” tours of Israel.Hiking in Israel isn’t just for nature lovers. I actually got into hiking during my first visit to Israel, but when I went back, however briefly, to the United States and hiked there, it just wasn’t the same. Don’t get me wrong there are tens of thousands of intense and beautiful hikes in North America that are challenging, fun and a nature lover’s dream, but my point is that hiking in Israel is a whole different experience. The key to hiking in Israel is by knowing it’s in depth history. The best place to start before you set out on a hike in any part of Israel is in the pages of the Bible. Whether you are a Jew or Christian, religious or atheist just does not matter, as the key is in the stories. The authors of the Bible were master story tellers who knew the landscape like the backs of their hands. There is no better way to explore Israel’s natural beauty, than to relive those stories where they are said to have happened. So sit tight, we’ll get to the hike, but first let’s examine this biblical passage: And he removed from thence unto the mountain on the east of Beth-el, and pitched his tent, having Beth-el on the west, and Ai on the east; and he builded there an altar unto the Lord, and called upon the name of the Lord. And Abram journeyed, going on still toward the South (Genesis 12:8-9).Now if you aren’t reading this in the original Hebrew it seems pretty straight forward, however there is a poetic inner meaning to the ancient Hebrew of the Torah. In this passage the words used to describe direction are actually places or descriptions. ‘East’ literally means “before” as in “before the sunrise” and “west” is literally “the sea” as in the direction of the Mediterranean Sea. “South” is called “Negbah” which is a form of the region of Israel’s southlands: The Negev.And Abram went up out of Egypt, he, and his wife, and all that he had, and Lot with him, into the South (Genesis 13:1). 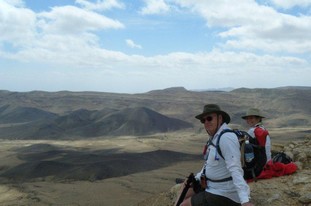 The strange part about this particular passage is that Abraham leaves Egypt which is south of the Negev and “goes up”, “into the south”. With these passages we can see how the author of this story views the land to which he is describing. When Abraham is “going up” it’s a spiritual going up, from the most powerful and “advanced” society in the world, Ancient Egypt, and into the “South” (which is actually north of Egypt) or Negev Desert. It is still considered south because it is south of where Abraham built his first altar in the Land of Israel. Abraham and his family will spend most of his life as a nomad wandering throughout the Negev and just beyond.The cooler weather these days makes for some great hiking conditions in the Negev. November is an ideal month to head to the south with your camping & hiking gear and a jeep, if you have one. Head south towards Beersheba, the “capital” city of the Negev, named for the seven lambs given by Abraham to Abimelech there as a testimony to his digging of the well (Gen. 21). Take Route 40 south, pass Kibbutz Sde Boker. In about four kilometers you will come to the turn off for Ben Gurion College at Sde Boker, and the Ein Avdat Nature Reserve. Drive to the nature reserve entrance and tell them that you are hiking to Ein Akev and there should be no charge. 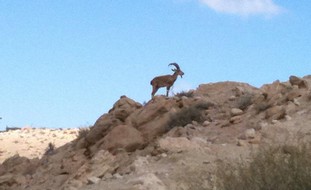 Drive down a winding road which will begin to straighten out and you will see an intersection of green and blue trail markers. Park off the road here. This is a challenging hike. Bring hats, lots of water, food, bathing suits as well as trail map number 15, 1:50,000. The hike can be done in under five hours, including time for a dip and a picnic. It is a challenging hike but not extremely difficult. Take the green trail at the start of “Maale Divshon” after the intersection with the red jeep trail. You are now hiking through the Wilderness of Zin.
And the Lord spoke unto Moses, saying: 'Send thou men, that they may spy out the land of Canaan, which I give unto the children of Israel…'Now the time was the time of the first-ripe grapes…So they went up, and spied out the land from the wilderness of Zin…And they went up into the South…and cut down from thence a branch with one cluster of grapes, and they bore it upon a pole between two…And they returned from spying out the land at the end of forty days (Numbers 13:1-25).This was the southern most border of the Land of Israel as designated by Moses and later Joshua. The Children of Israel came to this area and camped here during the exodus and spied out the land to the north only to be frightened back into the desert by the Canaanites and forced to wander the wilderness, for forty years because of their lack of faith. Only after the entire generation had died off, and a new, hardened and free Israelite population comes into maturity does Joshua lead them into war with the Canaanites.Follow this beautiful trail up the Divshon Heights for some of the most spectacular scenery in all Israel. About a kilometer up the trail there is an unmarked trail to your right that will take you 518 meters above sea level to an overlook of the Wilderness of Zin. There are many springs in this area and it would make for a good camp site for the hundreds of thousands of Israelites wandering the area. Below you to the north are the tombs of David & Paula Ben Gurion at the college. They choose to be buried here overlooking the entrance of the Promised Land for the children of Israel. Continue up the trail another kilometer. You will get to another terrific lookout called the Birds Overlook. See if you can spot a couple of reddish-brown Long Legged Buzzards or Egyptian Vultures known to inhabit this area. After about two more kilometers you will get to the Palm Trees Overlook. Look for flint near the trail along the way as prehistoric man is known to have inhabited the area. Continue on the green marked trail enjoying the view until you get to a blue marked trail which descends into the oasis of the Spring (Ein) of Akev. Enjoy the quiet, the falls and the scenery before continuing on down the wide blue trail for about two and a half kilometers then left on the wide red trail about three kilometers back to your car. If you have a jeep you can reach the spring by these wide trails and skip the hike.Joe Yudin became a licensed tour guide in 1999. He completed his Master’s degree at the University of Haifa in the Land of Israel Studies and is currently studying toward a PhD.