Off the Beaten Track: Lighting the way

There are so many sites in Israel connected to the Hanukka narrative; here is just a selection of those on offer.

By JOE YUDIN
Archaeological gardens 311
(photo credit: Joe Yudin)
Advertisement
Joe Yudin owns Touring Israel, a company that specializes in “Lifestyle” tours of Israel.So Hanukka is "The Festival of Lights" and almost every Jewish child can tell you the story of why we celebrate this festival. Many of us learned it in Hebrew school while our gentile friends were decorating their Christmas trees. We learned that the Jewish army led by Judah the Maccabee and his brothers kicked the Syrian-Greeks out of Israel, tore down their idols on the Temple Mount in Jerusalem, purified the holy Temple of the pagan desecrations and then found a sacred jar of olive oil blessed by the High Priest in a back room in the Temple. The Maccabees then polished up the once thrown aside Menorah, symbol of God's eternal light, and lit the golden oil lamp. Miraculously the oil lasted eight days even though there was only enough oil for one, just in time to receive the latest production of freshly pressed olive oil. There are so many sites in Israel connected to the Hanukka narrative and below is just a selection. 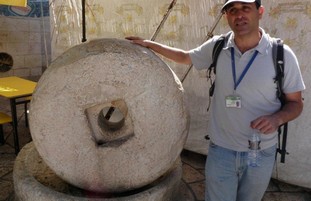 Photo: Joe Yudin
Let's start with the story in the Second Book of Maccabees. The King of Syria, a Greek called Seleucus IV, sent a tax collector, named Heliodorus, to Jerusalem to loot the Temple's treasures. The High Priest urged Heliodorus not to enter the Temple but he was intent on carrying out the kings orders and entered with his men. All of Jerusalem prayed that the Temple would be protected and lo and behold (II Maccabees 3:25-31 KJV):For there appeared unto them an horse with a terrible rider upon him, and adorned with a very fair covering, and he ran fiercely, and smote at Heliodorus with his forefeet, and it seemed that he that sat upon the horse had complete harness of gold.Moreover two other young men appeared before him, notable in strength, excellent in beauty, and comely in apparel, who stood by him on either side; and scourged him continually, and gave him many sore stripes.And Heliodorus fell suddenly unto the ground, and was compassed with great darkness: but they that were with him took him up, and put him into a litter.Thus him, that lately came with a great train and with all his guard into the said treasury, they carried out, being unable to help himself with his weapons: and manifestly they acknowledged the power of God.For he by the hand of God was cast down, and lay speechless without all hope of life.But they praised the Lord, that had miraculously honored his own place: for the temple; which a little afore was full of fear and trouble, when the Almighty Lord appeared, was filled with joy and gladness.In the Hellenistic Period exhibit in the archaeology section at the is displayed the Heliodoros Stele, part of which was excavated at the archaeological dig at Beit Guvrin. You can participate in a dig for a day there run by Archeological Seminars at the national park of Beit Guvrin-Marisha, south of Beit Shemesh. Call (02) 586-2011 for reservations and more details. The stele relates that in the year 178 B.C.E. of the rule of Seleuces IV, brother of Antiochus IV, Heliodorus was sent to Jerusalem and the surrounding territories to collect taxes, therefore confirming a key part in the Hanukka storyline. The Heliodorus Stele is a unique find that lays credence to the II Book of Maccabees and should be checked out. So does this prove that the Hanukka story happened? Well we know that there was friction with the Syrian-Greeks dealing with the Temple and its treasury. We know that Seleuces was later murdered by Heliodorus.  His successor Antiochus IV conspired with an impostor of a High Priest, Menelaus, and banned the practice of Judaism and probably violated the Temple. The Books of Maccabees and Josephus then describe the resistance to Antiochus and the battle that ensued between the Hasmonean (Maccabean) forces and the Greek military. Archeological evidence does show that a war took place during this time all over Judea. In Jerusalem's Old City just inside Dung Gate to the left is the entrance to the Davidson Center. Amongst the archaeological gardens between the stairs just south of the Temple Mount is what's left of the Greek fortress called the Akra. This fortress was the key to controlling the Temple Mount. In 164 B.C.E. during the Hebrew month of Kislev, Judah the Maccabees captured this fortress. His brother Simon later razed it to the ground. Check out the ruins and explore this fantastic national park and the nearby museum.Call (02) 627-7550) for more details.As if this victory over the Selucid Empire wasn't a miracle enough in itself, we have the story of the "Miracle of Lights" as mentioned in the Talmud. The surprising thing is that this particular story is not mentioned in the Maccabees own chronicles nor in Josephus. Did it really happen? Would the Maccabees have used oil blessed by Menelaus, the High Priest allied with Antiochus? The same High Priest who allowed idols and pagan sacrifice in the Temple? I doubt it. Most likely the eight days of celebration came for the Maccabees wanting a holiday similar to Succot and its eight days of celebration. Hanukka does take place at the tail end of the olive harvest when all of Judea would have been producing olive oil and sending the first oil of the year to market. Perhaps it was just a good marketing scheme to sell more oil for everyone's mini menorahs to light in their homes. Or perhaps it was a way for the rabbis who were Pharisees to steal away the glory of the Maccabees, who had changed allegiance under the kingship of Jon Hyrcanus over to the rival Jewish Saducean sect. Either way, this is an ideal time to check out olive presses both ancient and modern. In the Beit Guvrin national park a whole olive oil factory has been uncovered and preserved virtually intact.  You can also see olive presses at Korazim (tel. (04) 693-4982) in the Galilee and the Talmudic Park of Katzrin in the Golan (tel. (04) 696-2412). The 1800 year old Katzrin olive press has been refurbished and workshops are held there where they actually make oil in the ancient way. 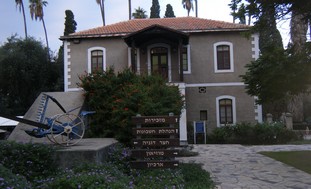 Photo: Joe Yudin
The newest way to experience olive oil making is at the Simu Shemen olive press at Kibbutz Deganiya Alef (tel. (04) 660-8641). The idea to build an olive press on Israel's very first kibbutz began one afternoon between Avner Abadi and his wife over a cup of coffee. After getting the approval from the Kibbutz, Avner and his brother Navot found a few investors and started to build their dream. The olive press was established this past September, and produces oil from the olives that grow on the kibbutz. The olive press can produce up to 750 million tons of olive oil a year.  Workshops, tastings and tours are available.Joe Yudin became a licensed tour guide in 1999. He completed his Master’s degree at the University of Haifa in the Land of Israel Studies and is currently studying toward a PhD.
Advertisement
Hot Opinion