Off the Beaten Track: The valley of the springs

I fell in love with Israel during the summer of 1990. It was a different Israel. There were just two television stations and Channel Two was brand new. Nobody under the age of thirty had a car, so you borrowed the family car IF the family owned a car. MTV and McDonald’s were unknown and so was American pop culture. Israeli radio pretty much played the likes of Pink Floyd, the Doors and Israeli rock and roll. People were easy to talk to, easy going and always up for a journey to seek out adventure to one of Israel’s many pristine oases, springs or streams that dot the countryside. All you had to do was stick out your thumb (or forefinger in Israel) and you were on your way. Times have changed. 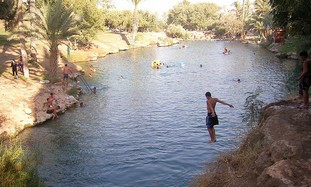 Gan HashloshaOne of the most famous national parks in northern Israel is Gan Hashlosha, also known as the Sachne. It gained its fame over a decade ago when it made National Geographic magazine’s top ten list of most beautiful places in the world. In 1990 I remember it being just that, a family place to relax, take in the scenery with faint music playing in the distance, but mostly a bunch of hippie looking kids having a great time in the natural warm waters. It was the perfect reflection of the ideal that was Israel. Since then, throngs of people have been descending on this beautiful place making it one of the nosiest, dirtiest and busiest national parks in the country. I’m not sure what the spark has been, but probably the ability of people to jump in their cars, speed along Israel’s outstanding highway system and pay the small sum to get into the park. Its accessibility has been its curse. It’s a shame the National Parks Authority doesn’t issue tickets to those people who litter, throw their cigarette butts all over and disrespect the people around them by blaring music and rambunctious behavior. For those that are looking for something a little quieter which is reminiscent of the Israel where we grew up in the summers, there is however another less famous nearby option for these oppressive summer days: Nahal Kibbutzim. 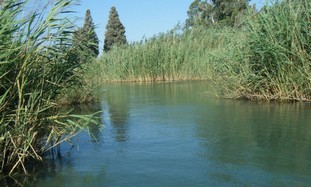 Nahal KibbutzimNahal Kibbutzim has been cordoned off to cars, jeeps, ATVs and campers for a short while and so far this summer it remains quite, clean and unspoiled. I wonder how long this will last. Just past the entrance to Kibbutz Nir David on road number 669 is a dirt road that leads you to a small eucalyptus grove to the right. Park here. Under the grove are picnic tables and a small, clear pool by a bubbling spring. This is a perfect spot for a picnic or for kids under three to splash around. Follow the trail to the left of the pool around the bend and down a dirt road. To your left you will see greenery and if you follow the dirt road west several hundred meters you will eventually get to a fork in the trail that leads to a short date palm tree growing along the side of a river. If you continue down the same trail you will get to Kibbutz Nir David’s tourist kiosk called “Valley of the Springs” which sells water and snacks, as well as rents bikes and golf carts that you can take to explore the area springs of Ein Muda, Ein Shokek and the springs around Nahal Kibbutzim. I like to start my adventure at the lone palm tree. 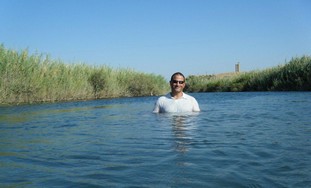 Nahal KibbutzimFrom the tree, ease yourself into the cool, clear waters. Wear some sort of footwear. You can see frogs and often turtles amongst the reeds as well as fish that swim beside you and nip at the hairs on your legs. The water is not deep and you can ease yourself in. Relax, swim and slowly make you way down river. Mount Gilboa looms overhead and the reeds that dot the rivers banks give you the feel that you are in the jungle. The river is eventually channeled twice into giant water pipes to provide for roads overhead. Not to worry, just position yourself in the center of the pipes holding on to the top as the water rushes around you and let go! You’ll be shot through the pipes and dunked into the water at the other side. It’s quite a rush. Shortly after the second set of pipes you get back to the pools and parking lot. Dry off and have some watermelon with feta cheese Israeli style. Enjoy!Joe Yudin became a licensed tour guide in 1999. He completed his Master’s degree at the University of Haifa in the Land of Israel Studies and is currently studying toward a PhD.
Advertisement
Subscribe for our daily newsletter