Off the Beaten Track: The view from Mount Tabor

By JOE YUDIN
Mount Tabor 311
(photo credit: Joe Yudin)
Advertisement
Joe Yudin owns Touring Israel, a company that specializes in “Lifestyle” tours of Israel.The Jezreel Valley is beautiful this time of year and we passed the tiny airstrip of Megiddo early in the morning. The airport is named for the famed ancient city of Megiddo whose ruins guard the southeastern mountain pass of the Iron Valley, known as Armageddon in the New Testament. The Kishon stream cuts through the valley and fills to the brim with flowing water after the winter rains. We cross the bridge over it and hovering over the valley to the northeast is Mt. Tabor and we made a beeline straight for it, behind us the mountains of Samaria. Mt. Tabor dominates the valley. Remains of many civilizations have been found on the mountain top dating back to prehistoric times. The prophet Hosea condemns the Jews for worshiping pagan gods there, and the Syrian-Greeks fight it out with their arch enemies the Egyptian-Greeks there eventually leading to a Maccabean uprising in Judea. Perhaps this mountain is most famous for its Catholic & Greek-orthodox tradition as the site of the Transfiguration of Jesus.About 3,100 years ago the ancient Israelites were under siege in this same valley. The remnants of displaced tribes we call “the Sea Peoples” from the geographical area we now call ancient Greece. These Sea Peoples, included both the Philistines who probably originated in Cyprus and their cousins the Sherdan, maybe the Shardana, who were from Sardinia. The Bibile relates in the book of Judges that :The general … Sisera, who dwelt in Haroshet-goiim…had nine hundred iron chariots, and oppressed the children of Israel for twenty years (Judges 4:2-3). 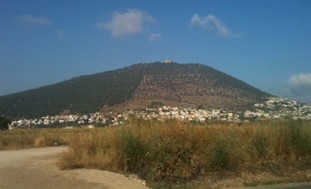 Mount TaborSo what do we know about Sisera and Haroshet-goiim? Sisera is an ancient Shardana name and Haroshet-goiim which means “Woods of the Gentiles” is thought to be by some archaeologists on top of the Samarian Mountains overlooking the Jezreel Valley between what is now the Jewish village of Katzir and the Arab city of Umm el-Fahm. Indeed Israeli archaeologist Adam Zertal has found some igloo shaped stone dwellings and curved stone walls that he dates back to the Late Bronze -Early Iron Age in what he says is Haroshet-goiim. The only other abodes that resemble these buildings from the same time period are in Sardinia. Other archaeologists dispute this and a new theory by Dr. Dror Ben-Yosef, places Haroshet Ha-goiim on a small tel near Kibbutz Hazorea near a spring. Both hills overlook the Jezreel Valley and would serve as a base of operations against the Israelites of the area. Deborah was a prophetess…she judged Israel at that time. She sent and summoned Barak…and said to him, “Behold, the Lord, the God of Israel, has commanded, ‘Go and convince [the people to go] toward Mount Tabor, and take with you ten thousand men…I will draw toward you – the Kishon Brook – Sisera, the general of Jabin’s army, with his chariot and his multitude; and I shall deliver him unto your hand’” Barak said to her, If you go with me, I will go; but if you do not go with me, I will not go.” (Judges 4:6-8).We recall Deborah’s strategy: Wait for the rain. Now as we have read Sisera had chariots of iron, the Israelites did not. Possibly, for this reason the Israelites settled in the hills and the Sea Peoples in the valleys. What good is an iron chariot in the mountains? Is this why Deborah waits? We drive up road Route 65 from Megiddo Junction through the city of Afula and take a left into the village of Darburiyya which probably got its name form an ancient Jewish village that was once here named after Deborah. We climb in our jeep to Mt. Tabor and get off at the monastery. We go to the back of the monastery, onto the porch and we can clearly make out the entire Jezreel Valley, including the hill near Kibbutz Hazorea, Tel Taanach, the Kishon Brook and the Kai’ne Brook by Tel Megiddo. Certainly Deborah and Barak would have a commanding view from up here. The view is spectacular. 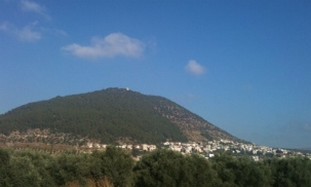 Mount TaborSisera mustered all his chariots – nine hundred iron chariots – and all the people who were with him, from Haroshet-goiim to the Kishon Brook…Deborah said to Barak, “Arise! For this is the day when the Lord has delivered Sisera into your hand …So Barak descended from Mount Tabor with the ten thousand men behind him. The Lord panicked Sisera and all the chariots and the entire camp by the edge of the sword before Barak; Sisera dismounted from his chariot and fled on his feet. Barak chased after the chariots and after the camp until Haroshet-goiim and the entire camp of Sisera fell by the edge of the sword; not even one was left (Judges 4:13-16).So what’s the clue? Why on earth did Sisera get off his chariot and flee on foot? How is it that a man running is faster than a chariot? Why couldn’t Sisera’s chariots get away from the Israelite army that was on foot? Of course the traditional answer is that it was God’s hand. You can’t argue with that but how did God “panic” Sisera and his army? There is another clue in the next chapter of the text in Deborah’s Song:Kings came and fought – then the kings of Canaan fought, from Taanach to the waters of Megiddo…From heaven they fought, the very stars from their orbits did battle with Sisera. Kishon Brook swept them away – the ancient brook, Kishon Brook, - but I myself trod it vigorously…(Judges 5:19-21).Water plays a big part here, and Deborah waits to give the order to attack, not inside the narrow, rocky, mountain pass where Sisera’s iron chariots would have been vulnerable but out in the flat valley next to the “waters of Megiddo” and ‘Kishon Brook”. Why? The answer is she was waiting for the rain. “From heaven they fought” is probably referring to a rain storm. Anyone who lives in the Jezreel Valley knows that during the dry months the valley is rock solid but after a couple of rainy days the thick, rich, black soil turns to mud and sections become total swamps. Not even a jeep, let alone a chariot, can maneuver during a rainstorm where the Ka’ine Stream by Megiddo and the Kishon Brook through the valley would overflow and wash away all those in their path. The only way through the muddy swamp would be on foot, hence Sisera’s abandoning of his chariot.Enjoy the view, but there is much more to see here. Inside the Greek section of the summit is the Cave of Melchitzedek believed to be the place, according to crusading knights, where he met Abraham. Down the road a bit and through the main gate is the fortress of al-Malik, is the Catholic section of the mountain. Here you can explore the remains of the medieval wall with twelve towers plus a cemetery, 1st century tombs and at the end of the road a beautiful catholic church-basillica built in 1924 as well as the ruins of a crusader church all built over earlier byzantine ruins. Enjoy.Joe Yudin became a licensed tour guide in 1999. He completed his Master’s degree at the University of Haifa in the Land of Israel Studies and is currently studying toward a PhD.