Far more beautiful than the buildings on top of its summit is the panorama that rewards each visitor to Mount Tabor.

By WAYNE STILES
NOVEMBER 21, 2011 13:22
Mount Tabor 521
(photo credit: Wayne Stiles)
Advertisement
Wayne Stiles is an author who has never recovered from his travels in Israel and loves to write about them from his desk in Texas.Unmistakable. Majestic. Distinctive. Graceful. All descriptions seem appropriate for an isolated hill wedged in the northeast corner of the Jezreel Valley. Rising from the valley floor 1,843 feet (575 m), Mount Tabor’s smooth contours honor it with a distinguishing outline recognizable from any vantage point. From the Plain of Bethsaida north of the Sea of Galilee, I have seen the top of Tabor peeking over over the hills of Arbel. From the other side of the Jezreel Valley on Mount Carmel, I have studied Mount Tabor’s exceptional form in its geographical context. Many times as I traveled in the Galilee, Mount Tabor would surprise me with its presence. “I had no idea you could see Tabor from here,” I would find myself saying. From any direction, the mountain stands alone in both beauty and topography. The Prophet Jeremiah has recorded, “As I live [declares the Lord] surely one shall come who looms up like Tabor among the mountains” (Jeremiah 46:18). 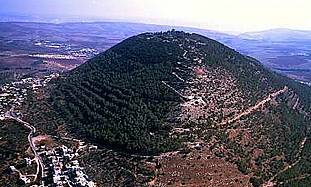 BiblePlaces.comNo wonder Mount Tabor played a noteworthy role in history. It offered a geographical landmark for travelers, a military advantage as the high ground, and it even provided an illusory spiritual benefit as a high place. For thousands of years, the International Highway that stretched the length of the Land of Israel passed at the foot of Mount Tabor. Countless travelers, traders, and armies would have recognized Tabor as a familiar landmark. The borders of the tribes of Naphtali, Zebulun, and Issachar came together at Mount Tabor (Joshua 19:22). Perhaps for this reason, the Lord commanded Barak: “Go and march to Mount Tabor, and take with you ten thousand men from the sons of Naphtali and from the sons of Zebulun. I will draw out to you Sisera, the commander of Jabin’s army, with his chariots and his many troops to the river Kishon, and I will give him into your hand” (Judges 4:6–7). One of the best places to envision the battle is atop Mount Tabor itself or from the adjacent Nazareth Ridge, overlooking the Jezreel Valley. Every time I stand there, I imagine Barak and Deborah and ten thousand troops standing on Tabor’s green slopes, silent and waiting with weapons in hand. Suddenly, Barak and his army rush as one man down the slope into the waiting army of Canaanite charioteers. God “routed” Sisera’s army and Barak chased them west across the valley toward Megiddo. Normally, chariots in the Jezreel Valley would offer a deadly advantage. But chariots do little good when stuck in the mud. Naturally, the Kishon flows as a narrow, snaking river that a person taking a good running start could jump over! Evidently, God sent a cloudburst that caused the Kishon’s waters to rise, flooding its banks and bogging down nine hundred iron chariots (Judges 5:20-21), allowing victory for Barak’s army. During the time of the divided kingdom, the Prophet Hosea directed a message to the northern priests, people, and king. The leaders had lured the people into the trap of idolatrous false worship—and one of these sites was on Mount Tabor: “You have been a snare at Mizpah and a net spread out on Tabor” (Hosea 5:1). Mountains often served as “high places” in cult worship, and Mount Tabor’s isolation, beauty, and height would have seem very attractive in the this way. During the first century, Josephus led the Jews under him to construct a wall around the summit of Tabor in forty days—only to be defeated by the Roman general Placidus. Josephus notes that a village existed on the summit at this time, perhaps the remnants of a garrison fortified by Alexander Jannaeus a century earlier (War 4:54-61). For this reason, it seems unlikely that Mount Tabor represents the authentic site of Jesus’ transfiguration—although a number of early church fathers believed that it did. At the time of the Transfiguration, Jesus and his disciples were in the area of Caesarea Philippi, at the base of Mount Hermon—a more likely designation for the term “high mountain” in Matthew 17:1. Regardless, a visit to the Basilica of the Transfiguration seems appropriate when on top of Tabor. The beautiful Franciscan church commemorates the significant occasion in the life of Jesus, an event that offered hope to the perplexed disciples who had just heard for the first time that Jesus would die in Jerusalem and rise again. 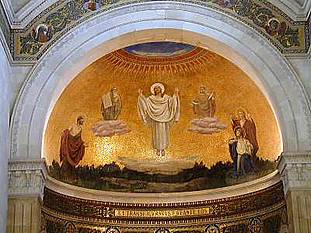 BiblePlaces.comThe panorama Mount Tabor provides rewards every visitor who journeys to the top. From this vantage at several locations, the eye can see the mountains of Upper Galilee, the Horns of Hattin, Mount Hermon, the Nazareth Ridge, the mountains of Samaria, the edge of the Carmel Range, and the vast expanse of the Jezreel Valley. In addition to the armies of Deborah and Barak, Mount Tabor has seen the likes of Thutmose III, Alexander the Great, Napolean, and more recently, General Allenby. Trying to picture them trudging by Tabor is a fun exercise. Speaking to God, the psalmist writes: “The north and the south, you have created them; Tabor and Hermon shout for joy at your name” (Psalm 89:12). Indeed, I think the only element that could make Tabor more beautiful would be hearing it shout for joy at the name of the Lord. Until then, I’m content just to gaze upon its beauty. What to Do There:
Visit the Basilica of the Transfiguration. Find a panorama facing west and read the account of Deborah and Barak’s battle in Judges 4-5. Try to pick out the various geographical points of interest mentioned in this article. How to Get There:
From Tiberias, take Route 77 west and turn south on Route 65 at the Golani Junction. At the Tavor Junction, take 7266 to the top of the mountain.Read Wayne's blog and subscribe to his weekly podcast at http://waynestiles.blogspot.com/
Advertisement
Subscribe for our daily newsletter