Sights and Insights: Casting a long line to the lake

Dr. Wayne Stiles ponders whether the site of et-Tell truly is the place of biblical Beit Saida and why it is so fascinating.

By WAYNE STILES
Beit Saida
(photo credit: Wayne Stiles)
Advertisement
Wayne Stiles is an author who has never recovered from his travels in Israel—and loves to write about them from his desk in Texas.The slopes near the site of et-Tell offer some of the most beautiful scenery I have seen in the Galilee. In the spring, wildflowers burst open to drink in the sun, and the surrounding meadows paint the whole area a bright green. From certain vantage points, I have looked at the Kinneret (Sea of Galilee) and observed no modern distractions. It seemed as if I was looking on the lake in the first century. Most modern maps, signs, and tourists point to the site of et-Tell as biblical Beit Saida. Perhaps it was in this area that the historian Josephus led his Jewish army in combat against the Roman forces of Sulla during the first Jewish Revolt (AD 66-70.) Because the marshy plain around Beit Saida made quick maneuvering difficult, Josephus’ horse fell and wounded him. RELATED:Sights and Insights: Shavuot at an unlikely placeSights and Insights: Last stop and a point of departureHerod the Great bequeathed Beit Saida to his son, Philip. Although the village became an official city with a new name, Julias, the Scriptures never refer to Beit Saida by that designation. The Greek influence imposed by Herod Philip even seemed to affect the Jews who lived there. The names Andrew and Philip are Greek in origin, and these Jews, along with Simon and Peter, grew up in Beit Saida (John 1:44). No doubt, they learned to speak and write Greek there during their formative years—a skill that would prove helpful in years to come (John 12:20-22; 2 Peter 3:1-2.)On my first visit to et-Tell, I saw a number of basalt ruins with houses honeycombed together. The archaeologists working that day had suspended from trees makeshift sifters by which they separated the dirt from any archaeological finds. 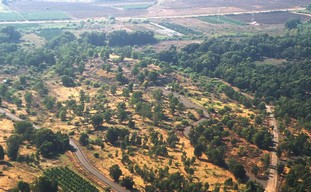 Photo: BiblePlaces.com
The archaeological remains in Beit Saida are sketchy and remain a source of conflicting views on the validity of the site. Even though most signs point to et-Tell as biblical Beit Saida, there just isn’t enough evidence to make it conclusive. The site sits some distance from the Sea of Galilee and about seven meters above the level of the water in the first century. Moreover, after twenty years, the archeologist’s spade has discovered little evidence that would support the existence of a substantial first-century city. One house dates from the second century BC to the first century AD. A typical home of the period, it has a central courtyard surrounded by rooms and a kitchen. Found here were items such as lead weights, a fishhook, and a curved bronze needle—all items from a fisherman’s trade. It has therefore received the name, “House of the Fisherman.” Beit Saida’s name itself means, “House of Fish.” If Beit Saida really did exist in this location, it would have required fishermen like Peter, Andrew, and Philip to make a daily commute to the lake. (I commute daily, and I can relate to the hassle it would have been.) The fishermen likely would have incurred extra taxes to bring their catches home across the border of the Jordan River. Perhaps, in order to avoid these problems, these men eventually relocated to Capernaum. 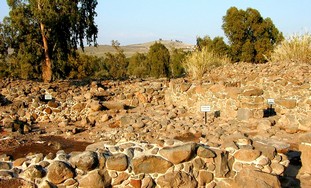 Photo: BiblePlaces.com
Beit Saida finds its place in the Scriptures as one of the three primary locations where Jesus performed miracles. The plain next to Beit Saida, with its green grass, served as the area where thousands of people ate a meal from a few fish and loaves that Jesus had multiplied (Mark 6:35-44)—similar to Elisha’s miraculous multiplication of bread centuries earlier (2 Kings 4:42-44.)If there was ever a place in Israel that fits the title of this column, “Sights and Insights,” Beit Saida was that place. Jesus healed a blind man here by an unusual process. First, there was partial sight restored to the man, and then, full sight was resorted (Mark 8:22-37). Why the two-stage miracle? Was Jesus having an off day? No, he was teaching his followers that God often reveals insight to his people in stages—little by little—rather than all at once. The gradual sight became a metaphor for growing insight. How to Get There: From the Kinneret, travel east on Route 87 to the Beit Saida Junction. Turn north on Route 888 for about 750 meters and see the site on the left. What to Do There: Meander through the basalt ruins, and observe the “House of the Fisherman” and other significant finds that the signs will identify for you. Make your way south along the footpath to the covered shelter where you can overlook the lake. Enjoy the shade and the benches as you read from Mark 6:35-44 and from Mark 8:22-37.Read Wayne’s blog and subscribe to his weekly Podcast at www.waynestiles.com.
Advertisement
Subscribe for our daily newsletter