Perched near Mount Hermon, Nimrod’s Fortress watches over the Huleh Basin from a beautiful vantage point.

By WAYNE STILES
OCTOBER 29, 2012 14:57
Panoramic view
(photo credit: BiblePlaces.com)
Advertisement
Wayne Stiles has never recovered from his travels in the Holy Land. Follow him on Twitter (@WayneStiles) or on his blog at www.waynestiles.com.

A long plateau rises east of the Sea of Galilee, high above the surrounding basins. As the highland stretches north, basalt cones penetrate the landscape, betraying extinct volcanoes below the surface. The volcanic soils offer lush pastures for grazing—and spectacular panoramas for the eyes. For thousands of years, the Golan Heights has served history in countless ways—from pasturelands to burial grounds to battlegrounds to borders. It’s no wonder this region has remained the envy of its environs—even to today. Biblical Bashan Although the stony ground was unforgiving to the plow, it proved ideal for the hoof. Cattle have grazed the Golan Heights for millennia, and its lush pastures became a biblical metaphor for abundance (Jeremiah 50:19; Micah 7:14). Amos, the fig-picking prophet from Tekoa, compared the indulgent and rebellious women of Samaria to the “cows of Bashan” (Amos 4:1). 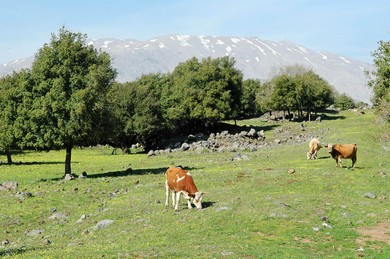 Cows of Bashan (BiblePlaces.com)Snow capped Mount Hermon stands as the tallest point in Israel and serves as the hinge between the northern edges of the Golan Heights and the southern point of the anti-Lebanon mountain range. The “dew of Hermon,” which King David referred to in Psalm 133, refers to the abundant rainfall the hills receive—averaging sixty inches annually. The headwaters of the Jordan River surface in the foothills of Mount Hermon at Dan and Caesarea Philippi. This mountain range likely served as the backdrop for when Jesus brought his disciples “up on a high mountain” for the event called the Transfiguration (Matthew 17:1-13). 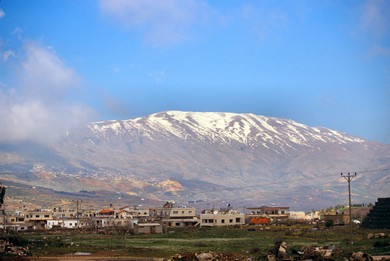 Mount Hermon (BiblePlaces.com)King David married the daughter of the king of Geshur (2 Samuel 3:3), located in the southern part of the Golan Heights. Their union produced prince Absalom, who sought refuge in his mother’s homeland during his rebellion against David (2 Samuel 13:37-38). Bastions, burials, and battlesIf someone would ever write a book on the misnomers of Holy Land sites, Nimrod’s Fortress would have its own chapter. Perched in the foothills of Mount Hermon, the crumbling castle watches over the Huleh Basin from a beautiful vantage point. Its name connects the fortress with the rebel of Genesis 10:8-9, who participated in the Tower of Babel. But in truth, Muslims built the bastion, after which a number of groups took control of the fortress, rebuilding and refortifying it through the years. Today’s rocky ruins largely represent remains from the 13th-century. Mosquitos lay claim to the fortress today. 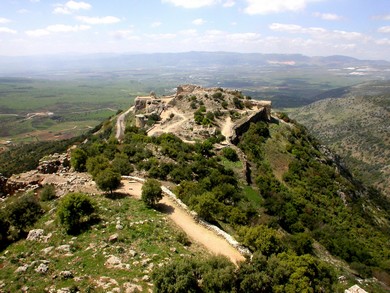 NimrodMore than a thousand years before Abraham buried Sarah in the Cave at Machpelah, the inhabitants of the Golan Heights buried their dead in dolmens. These above ground chambers consisted of two vertical slabs of stone topped by a massive horizontal boulder. Their name originates from the Breton words for “table” (dol) and “stone” (men). Hundreds of these simple burial chambers scatter across the landscape today. They bespeak of ancient mourners who preferred handling multi-ton boulders to digging graves in the stony soil. 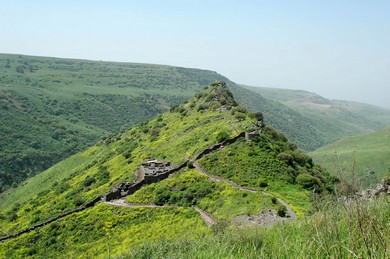 Gamla (BiblePlaces.com)The Gamla Nature Preserve offers one of the best places to see a dolmen. Although unconnected to Gamla historically, the dolmen’s association with death seems appropriate to the site. During the first Jewish Revolt against Rome (AD 66-79), Gamla served as the site of the Jews’ final stand in the Golan, east of the Sea of Galilee. For this reason, Gamla bears the nickname: “Masada of the North.” Gamla’s name derives from gamala, the Hebrew term for “camel,” so called because the site’s promontory resembles a camel’s hump bulging from the valley. The Golan Archaeological Museum in Qasrin allows visitors to view finds from Gamla and to learn the history of the Golan Heights from its beginning to modern times. Panoramic views—past and present Today, skeletons of Syrian structures lay scattered throughout the Golan Heights, giving silent testimony to the intense struggle that occurred to control the area. At one point, Syrian troops entrenched near Kfar Haruv—on the eastern ridge of the Sea of Galilee—fired down on the kibbutz at En Gev. During the Six Days War in 1967, Israel gained control of the Golan Heights from Syria. The present overlook from Kfar Haruv allows visitors to enjoy a full view of the Sea of Galilee in one glance. Truly a spectacular view. The Golan Heights remains one of Israel’s most strategic locations for national security. And yet, to visitors and tourists, the plateau represents a magnificent opportunity to explore some of Israel’s most historic places and scenic panoramas.

Wayne Stiles has never recovered from his travels in the Holy Land. Follow him on Twitter (@WayneStiles) or on his blog at www.waynestiles.com.Follow @JPost_Lifestyle