A picturesque courtyard with flowers and foliage leads to deep pits with ancient, stone walls;these are the Pools of Bethesda.

By WAYNE STILES
Sites and Insights: Where history meets scripture
(photo credit: BiblePlaces.com)
Advertisement
Wayne Stiles has never recovered from his travels in the Holy Land. Follow him on Twitter (@WayneStiles) or on his blog at www.waynestiles.com.Just inside Stephen’s Gate in Jerusalem lie several sites frequented by Christian tourists. The Antonia Fortress served as the bunkhouse for Romans troops, and its steps leading up onto the Temple Mount allowed the Romans to quickly quell any riots. The Apostle Paul gave a speech on the steps after one such riot (Acts 21:37-22:34).The other sites nearby—Via Dolorosa, the Ecce Homo arch, and the Monastery of the Flagellation—find their connection to Jesus by way of later traditions, not by history.But enter the unassuming doorway on the north side of the street, just beyond St. Stephen’s Gate, and history merges with Scripture. A picturesque courtyard with flowers and foliage leads to deep pits with ancient, stone walls. These are the Pools of Bethesda. 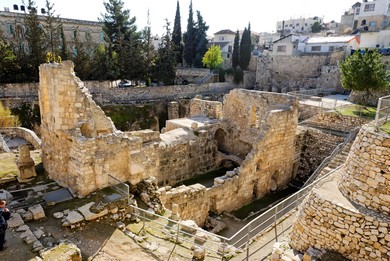 Even before the time of Jesus, this location may represent a shallow valley dammed to retain rainwater and referred to as “the upper pool” in the 8th-century BC (2 Kings 18:17; Isaiah 7:3).In the first century, the site had two adjacent pools with a surrounding colonnade on all four sides and one down the middle.The Book of John refers to “a pool, which is called in Hebrew Bethesda, having five porticoes”(John 5:2). The Bible reveals that Jesus had mercy on one of the many invalids who lay by the pools—and healed him (John 5:9).Under the Emperor Hadrian in the second century, Jerusalem became the pagan Aelia Capitolina, and the site of the Pools of Bethesda expanded to include a pagan temple with offerings to the Greek god, Asclepius.The Byzantines in the fifth century constructed a church to commemorate Jesus’ miracle at the pools. When the Crusaders rolled in to Jerusalem many centuries later, a church still stood on the site—though how it escaped Fatimid sultan Hakim’s demolition in 1009 remains a mystery.The church that stands today, St. Anne’s Church,is one of the most beautiful in Jerusalem and reveals Crusader Jerusalem’s finest architecture. Built in 1138, the Romanesque church allegedly enshrines the home place of the Virgin Mary’s parents, Joachim and Anne. The Crusaders also built a chapel by the pools. Its crumbling ruins still stand. 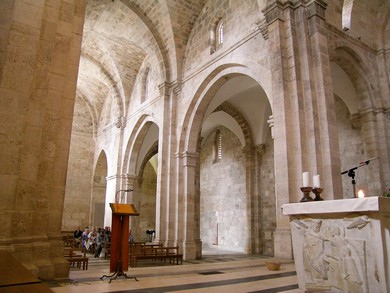 In 1192, after the Muslims overtook Jerusalem, Saladin used the church as a theological school, placing an inscription above the door that still remains to this day.Over the centuries, the church eventually fell into significant disrepair. Only after the French received it as a gift from the Turks in 1856 did it get restored to the lovely sanctuary we see today. Most well known for its amazing acoustics, the church enjoys the voices of thousands of Christian tourists each year singing praises to God.Wayne Stiles has never recovered from his travels in the Holy Land. Follow him on Twitter (@WayneStiles) or on his blog at www.waynestiles.com.Follow @JPost_Lifestyle