Take a tour of Gush Etzion

Steeped in history, the Gush has something for everyone. Cool off in natural pools, bike along exciting trails or wade through the water of an ancient aqueducts.

By AVIVA BAR-AM
SEPTEMBER 17, 2010 13:22
311_zipline
(photo credit: Shmuel Bar-Am)
Advertisement
In 1943, pioneers decided to settle in the biblical Hebron Hills. This was not the first attempt at settlement in what had become known as the Etzion Bloc: The first group purchased land and put down roots in 1927; a second arrived seven years later. In both cases, they were attacked during Arab riots and had to be evacuated. And, each time, their homes were destroyed.This time, however, four religious and secular communities sprang up in the bloc, prospering and expanding until they numbered 450 men, women and children. Then, soon after the United Nations voted to partition Palestine in November 1947, Arabs laid siege to the bloc.RELATED:
Gush Brew

A few months later, the well-equipped Jordanian Legion attacked, finally wiping Gush Etzion off the face of the earth on the very day before Israel was declared a state.Settlement was renewed after the Six Day War; and today, Gush Etzion boasts a population of 65,000 men, women and children in 16 communities and two towns. Over the past few years, the Gush has also become one of the leading centers of tourism in the country.Steeped in history that dates back to our forefathers, Gush Etzion has something for every visitor. You can cool off in natural pools, ride, hike or bike along exciting trails, and wade through the water of an ancient aqueduct.Or climb ropes and walls, let kids roam around a lovely mini-zoo, and get slightly drunk along the unusual wine route. Visit unique studios, shop at the outlet of what are arguably the most comfortable shoes in the world – and, when you get hungry, choose between two terrific gourmet dairy restaurants that are kosher lemehadrin.To really understand modern-day Gush Etzion, head first to Kibbutz Kfar Etzion, where you will view a heartbreaking audio-visual presentation about Gush history. Your screening room is actually a memorial hall dedicated to the hundreds of brave pioneers who fought to the bitter end.From here, you have a choice of goodies. On our trip, we paid homage to the 600-year-old Lone Oak, the one tree left standing after the bloc’s fall in 1948. Until the region was returned to them during the Six Day War, the tree was a symbol of Gush Etzion, something for those few who remained after the final battle to cling to. 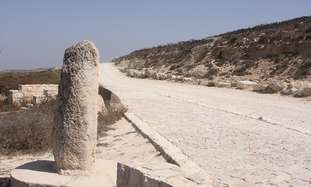 Nearby, we began a hike along one of the most important byways in the Land of Israel. The main road between Hebron and Jerusalem, and obviously chosen because the land was so level, it has been named Patriarchs’ Way. For this is the route that Abraham would have taken with his son Isaac as they walked toward Mount Moriah for the sacrifice that was averted at the last moment.King David would have traveled along this road when he and his household left Hebron to make Jerusalem the capital of Israel; and pilgrims took it when heading for the First and Second Temples. The Maccabees fought the Greeks on this road, in stirring battles.And a few centuries later, the Romans widened it, erecting milestones along the sides on which they carved inscriptions, unfortunately no longer visible, that noted the distance to Jerusalem and the name of the reigning emperor.It only takes about an hour and a half to walk what today is a dirt road, trail-marked in red, although you can do it in less, of course, on a bike or in a car.Along the way you pass milestones and donkeys; and at the T-junction you can explore a mikve that is well over 2,000 years old. Beautifully preserved, with separate steps for descending into the water and returning to the road, this ritual bath was nowhere near any towns or villages.Thus it is thought to have been used by pilgrims aware that it was okay to purify themselves up to 24 hours before entering the Temple in Jerusalem.A second mikve, hidden by brush, is found nearby.Taking the road to the left, you pass more milestones and an ancient kiln for firing plaster. You end up at Neveh Daniel, whose attractions include a large bakery and Ruthie, a very unusual gift shop.Or continue to the right for a visit to the Biyar Aqueduct. Carved out by King Herod, it was part of an intricate collection of aqueducts that transported water from the springs in the Hebron Hills to the Holy City of Jerusalem.Visitors can descend, as we did, to the depths for a look – and still keep dry. But more adventurous souls can wade a few meters through water to the source, or can get a bit more wet (the water is 80 centimeters deep) by trudging about half an hour to the end.The site is picnic friendly, and will be open until evening during Hol Hamoed with fun and games for the young ’uns, a wading pool for toddlers, barbecues and outdoor pita baking for the whole family. Phone: (02) 993-5133.Historically, the Hebron Hills were covered with vineyards.So it is not surprising that over the past few years not only have half a dozen wineries sprung up in Gush Etzion, but today there is even a “wine route” that visitors are invited to follow.The wineries range from the home-based winery in Bat Ayin, where the wine produced is organic, to the largest and oldest establishment: the Gush Etzion Winery, whose first vineyards were planted in 1995. Tours (for a small fee) include wine-tasting from several of the winery’s 12 labels, and should be booked in advance.The winery also features a gourmet dairy restaurant, whose view of the surrounding hills is stunning and whose food – from bread to pasta to scrumptious desserts – is all made on the premises. Phone: (02) 930-9220.Gush Etzion is blessed with open air, a biblical landscape, and unending opportunities for exploring nature.Paths on the slopes lead to numerous springs and pools, all clean and shady. Trail-marked in blue, a road leading to several of them begins near part of a building from Old Massuot Yitzhak, established by Holocaust survivors in 1945.On our trip we cooled off at Ein Yitzhak, named for 19-year-old Yitzhak Weinstock. Terrorists in a moving vehicle shot and killed the young Weinstock in 1993 while he was parked on the side of the road near Ramallah, trying to fix the engine on his car.In addition to picnic tables – and the sight of a spring bursting out of the ground – you can enjoy a pool that is a meter and a half deep. Don’t let the darkness of the water fool you; it is perfectly clean and refreshing.Had we gone just a bit further down the slope, we could have taken another dip – at Dubek Pool. Nature lover Dubi Weinstock, Yitzhak’s father, was one of the first to return to Gush Etzion after the Six Day War.Along the same road, Gavna Restaurant provided us with more gourmet delights. Situated amid a picturesque landscape, it offers fresh food prepared from scratch on the site. At times during the day you can enjoy your meal while watching fun-lovers zoom by along the zip-line at nearby Deerland (Havat Ha’ayalim).One of them could be me – who, at 62, is not the oldest person to have tried flying like a bird (the oldest was 87). In fact, because we spent hours at Deerland, we didn’t have time to visit the Naot shoe outlet (darn!) or Gush Etzion’s woodworking and ceramics studios.Located across from the entrance to Kfar Etzion, Deerland is chock-full of attractions, from rope climbing to zip-line, a mini-zoo for the whole family, a tiny train for tiny tots, and a colorful wall for adventurous souls to climb.Oh, and did I forget to mention bungee jumping over a trampoline? My biggest problem with the zip-line was the cost: After your 30-second, heavenly flight above the trees, you are dying to go again. But at NIS 100 a shot, you may have to wait for another time. Or try the shorter, less expensive zip-line....Other attractions cost far less, and you pay separately for each. However, during Hol Hamoed Succot, you can buy a reasonably priced combination ticket for everything but the zip-line. Phone: 050-538-8705.

In fact, Gush Etzion is definitely the place to be on Hol Hamoed, for this year’s festival offers plays, music, grape-picking and grape-stomping, treasure hunts, hikes, bike trips, galleries, and shopping.For full details see http://www.baitisraeli.co.il, or call (02) 993-3863 to get information on everything in the region all year round.Sites, restaurants, the visitors’ center and shops are closed on Shabbat and religious holidays. But nature – glorious nature – is open, always.Visitors who want free maps, and lots of advice on how to plan their time in Gush Etzion, can also stop in at the visitors’ center, next to the gas station and adjacent to the Gush Etzion Junction (Highway 60).
Advertisement
Subscribe for our daily newsletter