Unity has often proved elusive, especially for the many Christian denominations represented in Jerusalem.

By RYAN JONES, TRAVELUJAH
JANUARY 22, 2012 15:37
Christians praying in Jerusalem 311
(photo credit: Travelujah)
Advertisement
For further information on Christian tourism and Holy Land Tours to Israel contact  Travelujah.While all Christians may be united in faith, they are typically divided by doctrine. So fierce are those doctrinal divisions at times that they erupt into physical confrontations, such as the annual inter-denominational scuffle during the ceremony marking the Miracle of the Holy Fire on Easter Eve at the Church of the Holy Sepulcher in Jerusalem's Old City. Opponents of the Church like to point to such conflagrations and the divisions that spawn them in order to criticize our faith.But too often overlooked are genuine efforts toward unity, like the upcoming Week of Prayer for Christian Unity in Jerusalem. From January 22-29, members of various Christian denominations from Catholics to Orthodox Christians to Anglicans to Protestants will visit one another's churches and pray together. 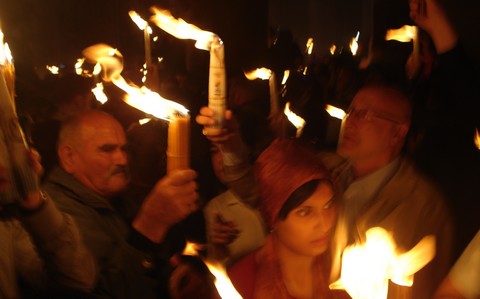 Holy Fire Ceremony in Jerusalem; photo courtesy TravelujahEach day, participants will visit a different church in order to become better acquainted with their Christian brothers and sisters and to seek God's blessing as they strive for unity. It is an unprecedented gesture aimed at reversing a shameful history of inter-denominational hostility.The Week of Prayer for Christian Unity was birthed by Catholic, Orthodox and Protestant church leaders in Poland. It was decided that Jerusalem should be the focal point of their effort, as this is the place where Jesus prayed for the unity of is followers in all generations."As [Jesus] awaited the suffering and death that was to come, he prayed that his disciples might be one so that the world might believe," wrote the event organizers. "As we pray for and strive towards the full visible unity of the Church we - and the traditions to which we belong - will be changed, transformed and conformed to the likeness of Christ."Those behind this effort recognize that success may require Christians of different denominations to open themselves up and reform their practices in ways that are not always easy. But they also stress that only by doing so can they "truly enter into the new life in Christ, which is the only true victory."