“Someone once said that if you love what you do, you will never work a day in your life,” recounts Barbara Shaw, owner of Barbara Shaw Gifts on Bezalel Street in Jerusalem’s city center. “I live and breathe design, and think about it at least 90 per cent of my life. It’s my mission to produce beautiful things.”

Barbara Shaw Gifts is a Jerusalem-based gift store that sells fun Judaica, exclusive gifts and Jerusalem-themed home ware items with a twist. The product colors, patterns and themes are inspired by Jerusalem, its surrounding landscapes and Barbara’s Jewish heritage.Barbara grew up near Bondi beach in Sydney in a home where artistic and entrepreneurial achievements were encouraged. She went on to study History of Art and Business Management. “Over the years, I worked in various industries including hi-tech and learned that I’m best as my own boss,” she explains.Barbara moved to Jerusalem in the 1980s with her family. “When we arrived, I couldn’t find gifts that I wanted to buy and so I decided to make my own,” she says. I was looking for gifts that were bright, colourful, practical, reasonably priced, well packaged and that reflected Israel, Jerusalem and Judaism in a whole new way.”“I liked the idea of taking a humble product, like the tea towel and infusing it with design, creativity, bold prints and good packaging. Things like tote bags, trivets, coasters and aprons are all small, useful and easy to pack. Though Armenian pottery is lovely, it’s breakable and quickly loses its novelty to travellers who have been here a million times,” Barbara warns.She works closely with talented multi-faceted designer, Tova Safra, who puts Barbara’s ideas into action. “It’s a collaborative effort. The thrill of creating is intoxicating. I love taking a concept and seeing it carried through each stage until someone eventually puts money in your hand for your original idea.” 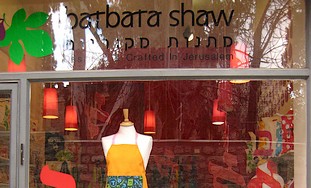 Barbara Shaw gifts
“I am fascinated by the letters of the Hebrew alphabet. They have such power. We play around with them and the interplay between vowels and polka dots for example. We’ve also placed them on glass for an interesting effect; the letters look as if they’re floating,” she explains. Another favorite of mine is the Yiddish sayings, which tap into my background and where I come from.  I love iconic themes like pomegranates, fig leaves and Jaffa oranges, which were begging to be interpreted in a fresh way. I am enchanted by the shape and outline of the fig leaf, and I use this theme recurrently and also on the shop logo.”The store has recently expanded into different media such as ceramics, paper and perspex and is about to expand further into metal products and jewelery. “There’s never ending scope.”Barbara lives on Azza Road in Rehavia and her workshop is in the industrial area of Givat Shaul. “Azza Road is homely and a terrific area to live in. I also like the workman atmosphere of Givat Shaul, and the hip location of our store on Bezalel street. The store overlooks a grand fig tree on the premises of the Bezalel building, with lovely designer shops on both sides.”Barbara is married to David, a writer and one-time foreign correspondent, and has three sons, who are all very supportive. “My family is number one in my life and I love to spend time with them.”“Work is my passion, and my downtime. I’m intrigued by both the business and design side of things,” Barbara adds. “I never feel the need to escape and I’m energized by thinking of what to make next. I get inspiration from everything – walking around, design websites, travel, magazines like Monocle and Wallpaper as well as design blogs like Designsponge. When asked about her favorite product, she answers: “My latest is usually what I love best.”“My art is my form of Zionism. I am happy that I employ six people and that I manufacture and export products produced in Israel that are inspired by the country’s landscape and themes. Women in business is another subject close to my heart and I lecture on both topics. I always tell groups that every business owner should ask themselves the simple question: would I buy my product?”“There are good things happening in Israel in the arts and I believe they need to be promoted as a tourist and income generator. You go to Europe and think why aren’t there ten million tourists visiting Israel, with so much to do and see in a short space of time? Jerusalem has a reputation as a heavy sort of place. I’m trying to lighten it up in my own way with colorful, fun, bold and zany designs. The city needs a name as a hip place, not just an ancient one.” 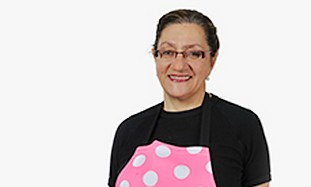 Barbara Shaw
“What makes me happy is seeing people laugh at the expressions on our products,” Barbara says. “It’s easy to make people cry, but not so easy to make them laugh. I love the humor.”Barbara Shaw gifts are available at all the major museums and gift stores around the country, and appeal to Israelis, anglos and tourists. She also sells to Europeans and Americans online, a market which is growing despite the recent economic climate. “We’re soon attending a big gift show in New York with the intention of expanding our reach. It’s a first so it’s nerve-wracking but also very exciting. I hope to bring more joy and fun further afield.”“I want other people and especially olim to be encouraged that it’s possible to start a business in Israel from scratch, and that it can actually work and pay the bills. I love what I do and really can’t imagine doing anything else.”Barbara Shaw Gifts, 2 Bezalel Street, corner Shmuel Hanagid Street(02) 625-7474iTravelJerusalem.com is a new online international travel portal offering all the latest information on things to do, places to eatand places to stay in Jerusalem.